Tsukong (autonym: tsu33 kɔŋ33) is a Loloish language of Yunnan, China. It is closely related to the Coong language of northwestern Vietnam. 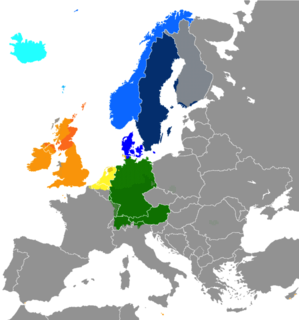 The West Germanic languages constitute the largest of the three branches of the Germanic family of languages.

The voiced labial–velar approximant is a type of consonantal sound, used in certain spoken languages, including English. It is the sound denoted by the letter ⟨w⟩ in the English alphabet; likewise, the symbol in the International Phonetic Alphabet that represents this sound is ⟨w⟩, or rarely, and the equivalent X-SAMPA symbol is w. In most languages it is the semivocalic counterpart of the close back rounded vowel. In inventory charts of languages with other labialized velar consonants, will be placed in the same column as those consonants. When consonant charts have only labial and velar columns, may be placed in the velar column, (bi)labial column, or both. The placement may have more to do with phonological criteria than phonetic ones.

Nuosu or Nosu, also known as Northern Yi, Liangshan Yi, and Sichuan Yi, is the prestige language of the Yi people; it has been chosen by the Chinese government as the standard Yi language and, as such, is the only one taught in schools, both in its oral and written forms. It was spoken by two million people and was increasing as of ; 60% were monolingual. Nuosu is the native Nuosu/Yi name for their own language and is not used in Mandarin Chinese, though it may sometimes be translated as Nuòsū yǔ.

Naxi, also known as Nakhi, Nasi, Lomi, Moso, Mo-su, is a Sino-Tibetan language or group of languages spoken by some 310,000 people most of whom live in or around Lijiang City Yulong Naxi Autonomous County of the province of Yunnan, China. Nakhi is also the ethnic group that speaks it, although in detail, officially defined ethnicity and linguistic reality do not coincide neatly: there are speakers of Naxi who are not registered as "Naxi" and citizens who are officially "Naxi" but do not speak it.

Korea JoongAng Daily is the English-language version of the South Korean national daily newspaper JoongAng Ilbo. The edition mainly carries news and feature stories by staff reporters, and some stories translated from the Korean language newspaper. It is one of the three main English-language newspapers in South Korea along with The Korea Times and The Korea Herald. The newspaper is published with a daily edition of The New York Times and it is located within the main offices of the JoongAng Ilbo in Sangam-dong, Mapo-gu, Seoul.

Mariveleño is a Sambalic language. It has around 500 speakers and is spoken within an Aeta community in Mariveles in the Philippines.

Taribelang, also known as Gureng Gureng, is a language of Queensland. Although no longer spoken as a native language by the Goreng goreng or Goeng people, it is spoken as a 2nd or 3rd language by under 100. There exists some confusion between Austlang's (AIATSIS) E33: Taribelang and E36: Goeng Goeng languages.

The Northern Loloish languages, also known as Northern Ngwi, are a branch of the Loloish languages that includes the literary standard of the Yi people. In Lama's (2012) classification, it is called Nisoid (Nisu–Lope), which forms the Nisoish branch together with the Axi-Puoid languages.

Lolopo is a Loloish language spoken by half a million Yi people of China. Chinese linguists call it "Central Yi" as well, which is one of the six Yi languages recognized by the government of China.

Nasu, or Nasu proper, is a Loloish language spoken by a quarter million Yi people of China. Nasu proper and Wusa Nasu are two of six Yi languages recognized by the government of China. Unlike most written Yi languages, Nasu proper uses the Pollard (Miao) script. A distinct form of the Yi script was traditionally used for Wusa, though few can still read it.

Tanglang, or Tholo, is a Loloish language spoken by 947 people in 8 villages of southern Tai'an Township 太安乡, Lijiang County, Yunnan, including in Hongmai 红麦 and Shuijing 水井村 villages. Tanglang has been in long-term contact with Bai, and is also in contact with Naxi. The speakers' name for the language is.

The Samu language, or Samatao, also known as Eastern Samadu, is a Loloish language spoken by older adults in Zijun Village 子君村, Yiliu Township 矣六乡, Guandu District 官渡区, Kunming, China. Although there was an ethnic population of 2,465 in 1999, there are no fluent speakers under 50 years of age.

Aluo is a Loloish language spoken by the Yi people of China. It is also known by its Nasu name Laka.

The Naic or Naxish languages are a group of Sino-Tibetan languages that include Naxi, Na (Mosuo), Shixing (Xumi), and Namuyi (Namuzi). They have been variously classified as part of the Loloish or the Qiangic branch of Sino-Tibetan.

Manga is a Lolo-Burmese language spoken by the Yi people of China. It is spoken in Gedang Village 格当村, Xinhua Township 新华乡, Funing County, Yunnan.

Mango is a Lolo-Burmese language spoken by just under 50 people in Guangnan County, Yunnan, China.

Maza is a Lolo-Burmese language spoken by the Yi people of China.

The Bisoid (Phunoi) languages belong to the Southern Loloish (Hanoish) branch of the Sino-Tibetan language family. Most Bisoid languages are spoken in Phongsaly Province, northern Laos, with smaller numbers of speakers living in China (Yunnan), Vietnam, Myanmar, and northern Thailand.