The Tsukuba Botanical Garden (筑波実験植物園, Tsukuba Jikken Shokubutsuen, 14 hectares, 36 acres) is a major botanical garden near the University of Tsukuba at 4-1-1 Amakubo, Tsukuba, Ibaraki Prefecture, Japan. [1] It is open daily except Mondays; an admission fee is charged.

As a research branch of the National Museum of Nature and Science, the garden is one of Japan's foremost botanical research facilities and provides public education. It currently contains about 5000 taxa of domestic and exotic plants from temperate and tropical regions around the world, with a particular emphasis on vascular plants of central Japan, East Asian ferns, Cycadaceae, Colocasia, and South American orchids. [2]

As of 2007 the garden supported eight researchers in plant taxonomy, with ongoing studies in cytotaxonomy to determine the number and shape of chromosomes, molecular biology based on DNA sequencing, chemotaxonomy using secondary metabolites, and plant morphology based on branching systems and pedology.

A biome is a collection of plants and animals that have common characteristics for the environment they exist in. They can be found over a range of continents. Biomes are distinct biological communities that have formed in response to a shared physical climate. Biome is a broader term than habitat; any biome can comprise a variety of habitats. 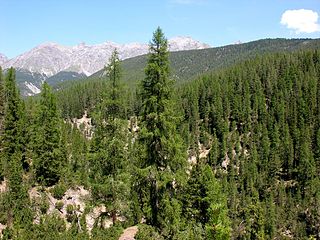 A forest is an area of land dominated by trees. Hundreds of definitions of forest are used throughout the world, incorporating factors such as tree density, tree height, land use, legal standing and ecological function. The Food and Agriculture Organization defines a forest as land spanning more than 0.5 hectares with trees higher than 5 meters and a canopy cover of more than 10 percent, or trees able to reach these thresholds in situ. It does not include land that is predominantly under agricultural or urban land use. Using this definition FRA 2020 found that forests covered 4.06 billion hectares or approximately 31 percent of the global land area in 2020. 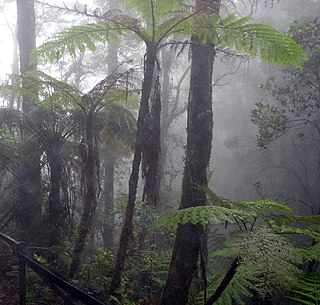 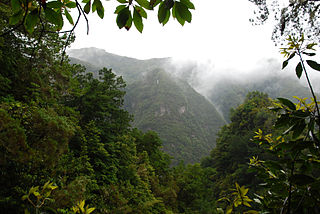 The Wuyi Mountains or Wuyishan are a mountain range located in the prefecture of Nanping, in northern Fujian province near the border with Jiangxi province, China. The highest peak in the area is Mount Huanggang at 2,158 metres (7,080 ft) on the border of Fujian and Jiangxi, making it the highest point of both provinces; the lowest altitudes are around 200 metres (660 ft). Many oolong and black teas are produced in the Wuyi Mountains, including Da Hong Pao and lapsang souchong, and are sold as Wuyi tea. The mountain range is known worldwide for its status as a refugium for several rare and endemic plant species, its dramatic river valleys, and the abundance of important temples and archeological sites in the region, and is a UNESCO World Heritage Site. 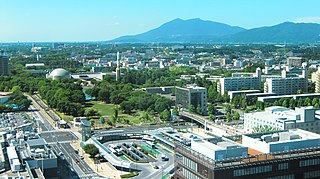 Actinodaphne is an Asian genus of the family Lauraceae, bay laurel-related, that comprises a group of flowering plants within the order Laurales. 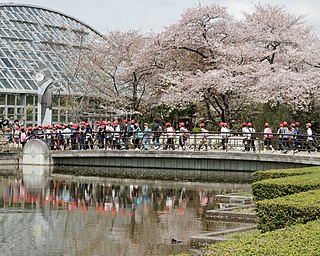 The Kobe Municipal Arboretum, also known as the Kobe City Forest Botanical Garden, is a 142.6-hectare botanical garden and arboretum located near Mount Maya at 4-1 Nakaichiri-yama, Shimotanigami, Yamada-cho, Kita-ku, Kobe, Japan. It is operated by the city and open daily except Wednesdays; an admission fee is charged.

The Botanic Gardens of Toyama are botanical gardens located at 42 Kamikutsuwada, Fuchu-machi, Nei-gun, Toyama, Toyama, Japan. They are open daily except Thursdays; an admission fee is charged. 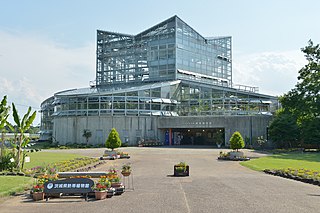 The Ibaraki Botanical Garden is a botanical garden and arboretum located at 4589 To, Naka, Ibaraki, Japan. It is open daily except Mondays; an admission fee is charged.

The Arboretum de Versailles-Chèvreloup is a major arboretum located just north of the Palace of Versailles at 30, route de Versailles, Rocquencourt, Yvelines, Île-de-France, France. It forms part of the Muséum national d'histoire naturelle, and is open everyday in the warmer months; an admission fee is charged.

Dodecadenia is a botanical genus of flowering plants in the family Lauraceae. It is present from central Asia, to Himalayas and India. It is present in tropical and subtropical montane rainforest, laurel forest, in the Weed-tree forests in valleys, mixed forests of coniferous and deciduous broad-leaved trees, Tsuga forests; 2,000–2,600 metres (6,600–8,500 ft) in China in provinces of Sichuan, Xizang, Yunnan, and countries of Bhutan, India, Myanmar, and Nepal.

Cinnadenia is a flowering plant genus belonging to the family Lauraceae. They are present in low and mountain cloud forest in Southeast Asia.

Carpolobia alba is a plant species in the milkwort family (Polygalaceae) that is endemic to rainforests, forest fringes, and savanna-park with altitudes below 400 metres (1,300 ft) in Western Tropical Africa. It is a shrub or small tree which is 3 to 6 metres tall. Its branches are puberulous or shortly pubescent. Its leaves are membranous or slightly leathery. The flowers it produces are yellowish white or white with a crimson spot at the base of upper petals. It produces yellow or scarlet-coloured fruit which are edible and usually contain 3 seeds. It was first described by George Don in 1831. It is used traditionally as a medicine against sexual dysfunction.