Prince Ōyama Iwao, OM, GCCT was a Japanese field marshal, and one of the founders of the Imperial Japanese Army.

Aizu (会津) is the westernmost of the three regions of Fukushima Prefecture, Japan, the other two regions being Nakadōri in the central area of the prefecture and Hamadōri in the east. As of October 1, 2010, it had a population of 291,838. The principal city of the area is Aizuwakamatsu.

Baron Yamakawa Kenjirō was a Japanese samurai of the late Edo period who went on to become a noted physicist, university president, and author of several histories of the Boshin War. Though his name is commonly written "Yamakawa," he himself wrote it as "Yamagawa" in English.

Oyama is a city located in Tochigi Prefecture, Japan. As of 1 August 2020, the city had an estimated population of 167,647 in 70,928 households, and a population density of 980 persons per km². The total area of the city is 171.76 square kilometres (66.32 sq mi). In 2006, Oyama became the second most populous city in Tochigi Prefecture, with the capital Utsunomiya retaining the number one spot. 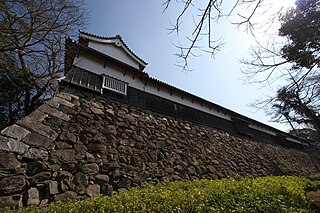 Fukuoka Domain was a Japanese domain of the Edo period. It was associated with Chikuzen Province in modern-day Fukuoka Prefecture on the island of Kyushu. The domain was also sometimes referred to as Chikuzen Domain, or as Kuroda Domain, after the ruling Kuroda family. 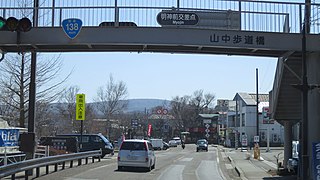 National Route 138 is a national highway of Japan connecting Fujiyoshida, Yamanashi and Odawara, Kanagawa in Japan, with a total length of 61.4 km (38.15 mi).

Tanzawa-Ōyama Quasi-National Park is a quasi-national park in the Kantō region of Honshū in Japan. It is rated a protected landscape according to the IUCN. The park includes the Tanzawa Mountains, Miyagase Dam and its surrounding forests, Hayato Great Falls, and the religious sites of Mount Ōyama in the mountains of western Kanagawa Prefecture.

Neptunea is a genus of large sea snails, marine gastropod mollusks in the subfamily Neptuneinae of the family Buccinidae, the true whelks.