Tu Huo Qiang (Chinese: 突 火 枪; Pinyin: tūhuǒqiāng) was one of the earliest true guns. It consisted of a moso bamboo tube which had been partially hollowed out and loaded with gunpowder and a single projectile, called the zi kē (子窠). The gunpowder utilized in this time period did not have much explosive potential, and upon igniting the fuse, the Tu Huo Qiang more often than not shot out flames and smoke as much as the projectile itself. This weapon did not have much killing potential and was mainly used for its shock value as well as psychological advantage. 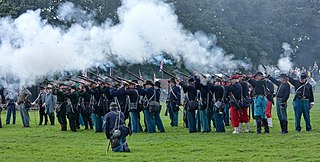 Gunpowder, also commonly known as black powder to distinguish it from modern smokeless powder, is the earliest known chemical explosive. It consists of a mixture of sulfur, carbon and potassium nitrate (saltpeter). The sulfur and carbon act as fuels while the saltpeter is an oxidizer. Gunpowder has been widely used as a propellant in firearms, artillery, rocketry, and pyrotechnics, including use as a blasting agent for explosives in quarrying, mining, and road building. 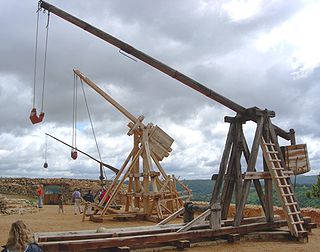 A trebuchet is a type of catapult that uses a long arm to throw a projectile. It was a common powerful siege engine until the advent of gunpowder. The design of a trebuchet allows it to launch projectiles of greater weights further distances than that of a traditional catapult. 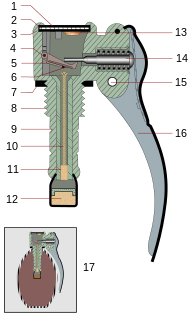 Military technology is the application of technology for use in warfare. It comprises the kinds of technology that are distinctly military in nature and not civilian in application, usually because they lack useful or legal civilian applications, or are dangerous to use without appropriate military training. 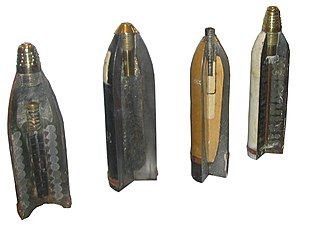 A shell, in a military context, is a projectile whose payload contains an explosive, incendiary, or other chemical filling. Originally it was called a bombshell, but "shell" has come to be unambiguous in a military context. Modern usage sometimes includes large solid kinetic projectiles that is properly termed shot. Solid shot may contain a pyrotechnic compound if a tracer or spotting charge is used. 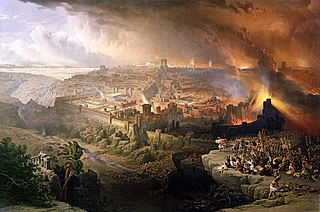 Early thermal weapons, which used heat or burning action to destroy or damage enemy personnel, fortifications or territories, were employed in warfare during the classical and medieval periods.

The hand cannon, also known as the gonne or handgonne, is the first true firearm and the successor of the fire lance. It is the oldest type of small arms as well as the most mechanically simple form of metal barrel firearms. Unlike matchlock firearms it requires direct manual external ignition through a touch hole without any form of firing mechanism. It may also be considered a forerunner of the handgun. The hand cannon was widely used in China from the 13th century onward and later throughout Eurasia in the 14th century. In 15th century Europe, the hand cannon evolved to become the matchlock arquebus, which became the first firearm to have a trigger. 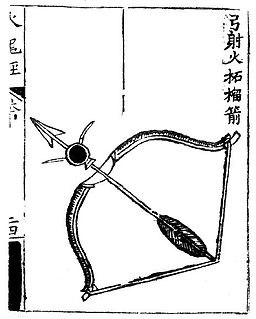 Fire arrows were one of the earliest forms of weaponized gunpowder, being used from the 9th century onward. Not to be confused with earlier incendiary arrow projectiles, the fire arrow was a gunpowder weapon which receives its name from the translated Chinese term huǒjiàn (火箭), which literally means fire arrow. In China a 'fire arrow' referred to a gunpowder projectile consisting of a bag of incendiary gunpowder attached to the shaft of an arrow. Fire arrows are the predecessors of fire lances, the first firearm.

The hwacha or hwach'a was a multiple rocket launcher and an organ gun of similar design which were developed in fifteenth century Korea. The former variant fired one or two hundred rocket-powered arrows while the latter fired several dozen iron-headed arrows or bolts out of gun barrels. The term was used to refer to other war wagons or other cart-based artillery in later periods, such as that developed by Byeon Yijung in the 1590s. 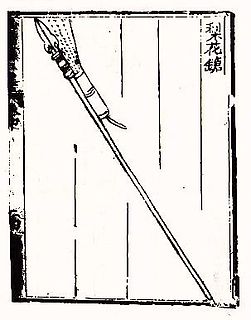 The fire lance was a gunpowder weapon and the ancestor of modern firearms. It first appeared in 10th–12th century China and was used to great effect during the Jin-Song Wars. It began as a small pyrotechnic device attached to a polearm weapon, used to gain a shock advantage at the start of a melee. As gunpowder improved, the explosive discharge was increased, and debris or pellets added, giving it some of the effects of a combination modern flamethrower and shotgun, but with a very short range, and only one shot. By the late 13th century, fire lance barrels had transitioned to metal material to better withstand the explosive blast, and the lance-point was discarded in favor of relying solely on the gunpowder blast. These became the first hand cannons.

The hammer is a part of a firearm that is used to strike the percussion cap/primer, or a separate firing pin, to ignite the propellant and fire the projectile. It is so called due to the fact that it resembles a hammer in both form and function. The hammer itself is a metal piece that forcefully rotates about a pivot point.

Cai Guo-Qiang is a Chinese artist who currently lives and works in New York City and New Jersey.

The history of cannons spans several hundred years from the 12th century to modern times. The cannon first appeared in China sometime during the 12th and 13th centuries. It was most likely developed in parallel or as an evolution of an earlier gunpowder weapon called the fire lance. The result was a projectile weapon in the shape of a cylinder that fired projectiles using the explosive pressure of gunpowder. Cannons were used for warfare by the late 13th century in the Yuan dynasty and spread throughout Eurasia in the 14th century. During the Middle Ages, large and small cannons were developed for siege and field battles. The cannon replaced prior siege weapons such as the trebuchet. After the Middle Ages, most large cannons were abandoned in favor of greater numbers of lighter, more maneuverable field artillery. New defensive fortifications such as bastions and star forts were designed specifically to better withstand artillery sieges. Cannons transformed naval warfare with its deadly firepower, allowing vessels to destroy each other from long range. As rifling became more commonplace, the accuracy of the cannon was significantly improved, and they became deadlier than ever, especially to infantry. In World War I, a considerable majority of all deaths were caused by cannons; they were also used widely in World War II. Most modern cannons are similar to those used in the Second World War, including autocannons—with the exception of naval guns, which are now significantly smaller in caliber. 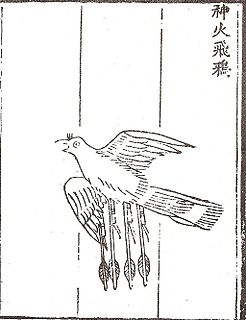 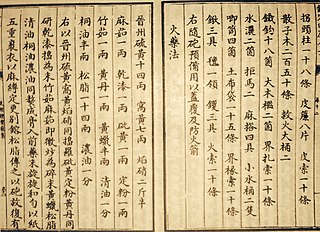 Gunpowder is the first explosive to have been developed. Popularly listed as one of the "Four Great Inventions" of China, it was invented during the late Tang dynasty while the earliest recorded chemical formula for gunpowder dates to the Song dynasty. Knowledge of gunpowder spread rapidly throughout Asia, the Middle East and Europe, possibly as a result of the Mongol conquests during the 13th century, with written formulas for it appearing in the Middle East between 1240 and 1280 in a treatise by Hasan al-Rammah, and in Europe by 1267 in the Opus Majus by Roger Bacon. It was employed in warfare to some effect from at least the 10th century in weapons such as fire arrows, bombs, and the fire lance before the appearance of the gun in the 13th century. While the fire lance was eventually supplanted by the gun, other gunpowder weapons such as rockets and fire arrows continued to see use in China, Korea, India, and eventually Europe. Bombs too never ceased to develop and continued to progress into the modern day as grenades, mines, and other explosive implements. Gunpowder has also been used for non-military purposes such as fireworks for entertainment, or in explosives for mining and tunneling.

A gun is a ranged weapon designed to use a shooting tube to launch projectiles. The projectiles are typically solid, but can also be pressurized liquid, gas or even charged particles. Solid projectiles may be free-flying or tethered. A large-caliber gun is also called a cannon.

The Chongtong was a term for military firearms of Goryeo and Joseon dynasty. The size of chongtong varies from small firearm to large cannon, and underwent upgrades, which can be separated in three generation type. The well-known "Cheonja", "Jija", "Hyeonja", and "Hwangja" were named after the first four characters of the Thousand Character Classic in decreasing size, thus making them equivalent to Cannons A, B, C, and D.

Gunpowder weapons in the Song dynasty included fire arrows, gunpowder lit flamethrowers, soft shell bombs, hard shell iron bombs, fire lances, and possibly early cannons known as "eruptors". The eruptors, such as the "multiple bullets magazine eruptors", consisting of a tube of bronze or cast iron that was filled with about 100 lead balls, and the "flying-cloud thunderclap eruptor", were early cast-iron proto-cannons that did not include single shots that occluded the barrel. The use of proto-cannon, and other gunpowder weapons, enabled the Song dynasty to ward off its generally militarily superior enemies—the Khitan led Liao, Tangut led Western Xia, and Jurchen led Jin—until its final collapse under the onslaught of the Mongol forces of Kublai Khan and his Yuan dynasty in the late 13th century.

The Heilongjiang hand cannon or hand-gun is a bronze hand cannon manufactured no later than 1288 and is the world's oldest confirmed surviving firearm. It weighs 3.55 kg and is 34 centimeters long. The Heilongjiang hand cannon was excavated during the 1970s in Banlachengzi, a village in Acheng District, Heilongjiang province, China. It was found alongside other bronze artifacts made in the style of the Jurchen Jin Dynasty. The hand cannon was probably used in battles fought nearby Banlachengzi in 1287 and 1288. The History of Yuan states that a Jurchen commander by the name of Li Ting led a group of soldiers equipped with hand cannons into a military camp in 1288, as part of an anti-rebellion campaign for the Yuan dynasty. The cannon currently resides at the Heilongjiang Provincial Museum in Harbin, China.