Pandit Tulsidas Borkar had been diagnosed with tuberculosis and was treated in Mumbai's Nanavati Hospital. But, due to old age, his body didn't responded well to the treatment. He died at the age of 83 on 29 September 2018 at 10:20 A.M. in Mumbai.

Vishnu Vāman Shirwādkar, popularly known by his pen name, Kusumāgraj, also known as Vi. Vā. Shirwadkar, was an eminent Marathi poet, playwright, novelist, short story writer, apart from being a humanist, who wrote of freedom, justice and emancipation of the deprived, In a career spanning five decades starting in pre-independence era, he wrote 16 volumes of poems, three novels, eight volumes of short stories, seven volumes of essays, 18 plays and six one-act plays. His works like the Vishakha (1942), a collection of lyrics, inspired a generation into the Indian freedom movement, and is today considered one of the masterpieces of Indian literature, apart from his play, Natsamrat, which has an important place in Marathi literature. He was the recipient of several State awards, and National awards including the 1974 Sahitya Akademi Award in Marathi for Natsamrat, Padma Bhushan (1991) and the Jnanapith Award in 1987; he also served as the President of the Akhil Bharatiya Marathi Sahitya Sammelan held at Margao in 1964. 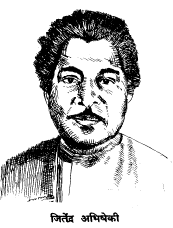 Pandit Jitendra Abhisheki was an Indian vocalist, composer and scholar of Indian classical, semi-classical, and devotional music. While he distinguished himself in Hindustani music, he is also credited for the revival of the Marathi musical theatre in the 1960s. Jitendra Abhisheki has been praised as being "among the stalwarts of Hindustani classical music who mastered other musical forms such as thumri, tappa, bhajan, and bhavgeet. His work in Marathi natyasangeet is well-known."

Balakrishna Bhagwant Borkar was a poet from Goa, India.

Dr. Bharati Vaishampayan was a Hindustani classical vocalist of the Jaipur-Atrauli gharana and the former Dean and Head of Department of Music at Shivaji University.

Anand Bhate is an Indian classical vocalist from the Kirana gharana. He is popular for his classical singing of songs from the Marathi film Balgandharva (2011). 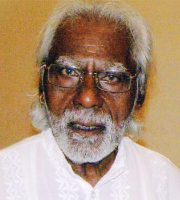 Vitthal Umap was an Indian folk singer, shahir and social worker from Maharashtra state. Umap was an Ambedkarite and Buddhist. To illustrate B. R. Ambedkar's philosophy to the people, he wrote the song-books "Mazi Vani Bhimacharani" and "Mazi Aai Bhimai". 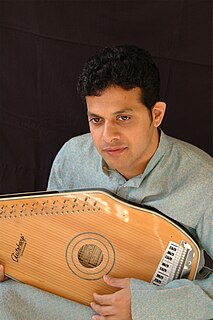 Mahesh Kale is an Indian Classical vocalist renowned for his specialization in Indian Classical (Hindustani), Semi-Classical, Devotional music including Natya Sangeet. Mahesh Kale, after winning the 63rd National Film Award as the Best Playback Singer, for classical piece in the film Katyar Kaljat Ghusli, has firmly established himself as a face of Indian classical music of the new generation. He is a disciple of Pandit Jitendra Abhisheki.

Ramchandra Purushottam Marathe, also known as Pandit Ram Marathe, was a Marathi music director, singer, and actor on stage and in films. As a child actor, he performed the title role of Krishna in Prabhat Film Company's 1938 film, Gopal Krishna. He was disciple of Vilayat Hussain Khan, the maestro of Agra gharana of Hindustani classical music., Master Krishnarao Phulambrikar and others. Through Master krishnarao, he developed his Khayal style which had elements of different gharanas such as Jaipur, Gwalior and Agra.

Manjusha Kulkarni-Patil is a Hindustani classical music vocalist. She belongs to the Gwalior gharana.

Ashok Patki is an Indian music director and composer; working predominantly in Marathi cinema, theatre and television. He is best known for his very popular compositions like "Mile Sur Mera Tumhara", "Purab Se Surya Uga". Patki has also composed over 5000 jingles and has been awarded with Indian National Film Award for Best Music Direction at 54th National Film Awards in 2006 for a Konkani film, Antarnaad. 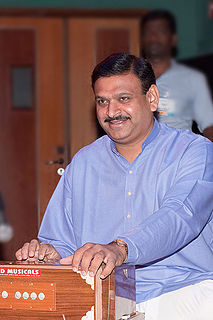 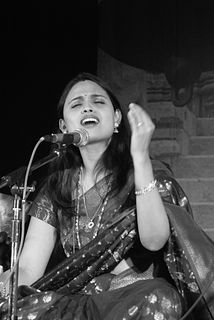 Ramdas Shantaram Kamat is musician from Mapusa, Goa who has worked in Sangeet Natak, Marathi theatre.

Ravindra Amonkar is a Goan theatre artist and director and also a previous vice-chairman of Bal Bhavan Goa.He mastered the areas of dramatics and theatre art such as acting, set designing, light arrangements, sound editing, choreography, script writing, translations, background & main music direction, art direction, and production. He proved his talent through successful & prize-winning performance in competitions within and outside the state. 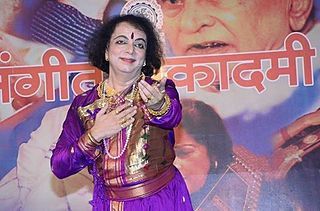