Tunku Ismail Idris Abdul Majid Abu Bakar Iskandar ibni Sultan Ibrahim Ismail [1] (Jawi: تونكو إسماعيل إدريس عبدالمجيد أبو بكر إسكندر ابن سلطان إبراهيم إسماعيل; born 30 June 1984) [2] is the Tunku Mahkota or Crown Prince of Johor, heir apparent and first in line of succession to the throne of Johor. He is the eldest son of the current Sultan of Johor, Sultan Ibrahim Ismail and his consort Permaisuri of Johor, Raja Zarith Sofiah. [2] He is the grandson of both Sultan Iskandar of Johor and Sultan Idris Shah II of Perak.

He is also a half third cousin of Nazrin Shah of Perak (the current Sultan of Perak) since both share a common male ancestor (Idris Shah I of Perak). He is also a grandnephew as well as nephew by marriage of Abdullah of Pahang, the Sultan of Pahang and an 11th cousin of Tengku Muhammad Ismail, the crown prince of Terengganu since they both share a common male ancestor (Tun Habib Abdul Majid).

Tunku Ismail completed his early education at Sekolah Sri Utama and Sekolah Rendah Kebangsaan St. Joseph in Johor Bahru. He subsequently received lower secondary education at the Australian International School in Singapore and continued with his higher secondary studies at Hale School in Perth, Western Australia, until 2002. [2] [3] Tunku Ismail is the eldest among six siblings. Like his father, Tunku Ismail has no tertiary (academic) qualification.

Tunku Ismail was appointed Raja Muda (literally means "Younger King," but taken to mean as second Heir Apparent or son of the Crown Prince) on 8 April 2006 by his grandfather, the late Sultan of Johor, and placing him second in line to the throne (Now first in line after the passing of Sultan Iskandar). [2] [3] Tunku Ismail was appointed as the Tunku Mahkota of Johor on 28 January 2010. [4]

Following a family tradition of getting trained in armed forces, with his late grandfather in the Malaysian Army and father in the US Army, Tunku Ismail aspired for a career in the Indian armed forces. [5] In July 2003, he enrolled as a cadet officer in the Indian Military Academy (IMA), India’s premier military training school located at Dehradun. [2] He was commissioned as a lieutenant in December 2004 and absorbed into the Indian army. He was promoted to the rank of captain in December 2007. [6] His father and grandfather also had trained at IMA. [7]

The Malaysian prince is the first foreigner to lead a unit of Indian Army in the Indian Republic Day Parade. [5] [8] [9] On 26 January 2007, with a rank of captain in Indian Army, he led a mounted column of Jaipur-based 61 Cavalry regiment to salute president of India Dr. A.P.J. Abdul Kalam during the Republic Day celebrations. [8] The president himself chose Tunku Ismail to lead the unit of around 400 men of the world's only non-ceremonial horse-mounted cavalry. [6] The parade was witnessed by chief guest of the day president of Russia Vladimir Putin and his entourage, along with other dignitaries of Indian politics and military amidst tight security. [6] [10] Tunku Ismail's father Tunku Ibrahim Ismail flew in from Johor Bahru on 23 January 2007 to be present at the celebrations while his son added a chapter to the history of Indian Army. [10]

A polo enthusiast, Tunku Ismail is a skilful horse rider. He was bestowed the Best in Riding award among IMA cadets between 2003 and 2004. He is also a polo player for his regiment and has won many trophies. [2] In football, he is the president of Johor FC. [11]

The prince is also a sports car enthusiast. All of his cars are registered under the same licence plate of "TMJ", an abbreviation from the title Tunku Mahkota Johor which is also his nickname as addressed informally by Malaysians within and outside Johor.

He is noted for his religious moderation and veiled criticism of more conservative Muslims who denounced him for shaking hands with women in 2016. [12]

As President of Johor Football Association

His Royal Highness the DYAM Tunku Mahkota (Crown Prince) of Johor, Tunku Ismail Idris ibni Sultan Ibrahim has been appointed as the President of Johor Football Association (PBNJ). The EGM held in Johor Bahru saw the Crown Prince appointed as the new President replacing the former, Jais Sarday. Among his plans to help bring back Johorean football to its former glory, the Crown Prince merged the Johor teams (which previously were Johor FC, MBJB and MP Muar) into only one where all of the players wear the Jengking (Scorpion) Team Jersey. .[ citation needed ]

Tunku Ismail's leadership on the club Johor Darul Ta'zim F.C also oversaw its success as the first Southeast Asian club to lift the AFC Cup in 2015. [13]

As FAM Presidential Advisor and President of FAM

In 2014, the Football Association of Malaysia (FAM) appointed the Tunku Ismail Sultan Ibrahim as an advisor to the previous FAM president, his uncle, Sultan Abdullah of Pahang. Tunku Ismail assisted and worked hand in hand with FAM in improving the quality of football within the country, particularly with the national team as well as the junior teams.

As predicted, there were several concerns about the news, particularly with Tunku Ismail having lost the FAM presidency election to Tengku Abdullah earlier that year. Besides that, he had been extremely vocal with his criticisms on the nation's footballing body. However, the then Johor FA president was extremely optimistic about the new role, claiming that he will only be pushing for the betterment of football within the country. [14]

On 24 October 2008, reports surfaced about a confrontation and a royal scuffle which allegedly occurred in a nightclub at Crowne Plaza Hotel in Kuala Lumpur between two princes. Tunku Nadzimuddin, a member of the Negeri Sembilan household, filed a police report accusing of a Johor royal whom he identified the culprit to be Tunku Ismail; for initiating the confrontation and assaulting him in the face and head. A friend of Tunku Nadzimuddin, Shamshudhuha Ishak, a lawyer, filed another police report accusing of Tunku Ismail's bodyguards of assaulting him and losing two teeth in the process. [15]

Khaleeda, daughter of Bustamam Daud and Aziyah Abdul Aziz, is the youngest of five siblings and was born in Kuala Lumpur. [19]

See also: List of honours of the Johor Royal Family by country 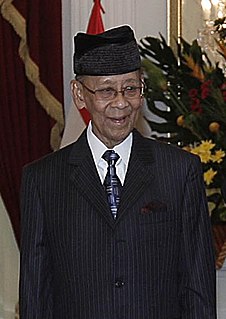 Al-Sultan Al-Mu’tassimu Billahi Muhibbuddin Tuanku Al-Haj Abdul Halim Mu'adzam Shah ibni Almarhum Sultan Badlishah was the 28th Sultan of Kedah, reigning from 1958 to 2017. He served as the fifth Yang di-Pertuan Agong of Malaysia from 1970 to 1975, and as the 14th Yang di-Pertuan Agong from 2011 to 2016. He was the first person to reign as Yang di-Pertuan Agong twice, as well as the oldest elected to the office. Immediately prior to his death, he was the second longest-reigning living monarch in the world after Queen Elizabeth II of the United Kingdom.

Al-Mutawakkil Alallah Sultan Iskandar Al-Haj ibni Almarhum Sultan Ismail was the 24th Sultan of Johor and the 4th Sultan of Modern Johor. He succeeded his father Sultan Ismail upon the latter's death on 10 May 1981. He was the eighth Yang di-Pertuan Agong of Malaysia from 26 April 1984 to 25 April 1989. Sultan Iskandar's reign lasted for almost 29 years until his death in January 2010. His children are married into the different royal houses of Malaysia. His eldest daughter Tunku Kamariah, the Tengku Puan Laksamana, married the Tengku Laksamana of Selangor, Tengku Sulaiman Shah. His successor and eldest son Sultan Ibrahim married Raja Zarith Sofiah of the Perak Royal Family. His daughter Tunku Azizah Aminah Maimunah Iskandariah married the heir apparent of Pahang, now Sultan Abdullah. His younger son Tunku Abdul Majid married a member of the Kedah Royal Family, Tunku Teh Mazni.

The Sultan of Johor is a hereditary seat and the sovereign ruler of the Malaysian state of Johor. In the past, the sultan held absolute power over the state and was advised by a bendahara. Currently, the role of bendahara has been taken over by chief minister with the constitutional monarchy system via Johor State Constitution. The Sultan is the constitutional head of state of Johor. The Sultan has his own independent military force, the Royal Johor Military Force. The Sultan is also the Head of Islam in Johor state.

This article lists important figures and events in Malaysian public affairs during the year 1984, together with births and deaths of notable Malaysians.

This article lists important figures and events in Malayan public affairs during the year 1956, together with births and deaths of significant Malayans. 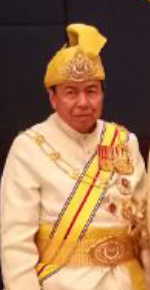 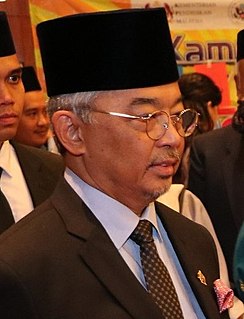 Al-Sultan Abdullah Ri'ayatuddin Al-Mustafa Billah Shah ibni Almarhum Sultan Haji Ahmad Shah Al-Musta'in Billah has served as the 16th Yang di-Pertuan Agong of Malaysia and the 6th Sultan of Pahang since January 2019. He was proclaimed as sultan on 15 January 2019, succeeding his father, Sultan Ahmad Shah, whose abdication was decided at a Royal Council meeting on 11 January 2019.

Raja Zarith Sofiah binti Almarhum Sultan Idris Iskandar Al-Mutawakkil Alallahi Shah Afifullah is the Permaisuri of Johor. She was born as a member of the Perak Royal Family. While still attending Somerville College, Oxford, she married the heir to the throne of Johor. Now a mother of six, she participates in the work of non-governmental organisations and universities, and writes a periodical column for a newspaper.

Malaysia practises an elective monarchy, so there is no distinct line of succession to the Malaysian thrones. In the event where the current seat of the throne falls vacant, the Conference of Rulers meet to elect the new Yang di-Pertuan Agong (monarch) from among the rulers of the nine Malay states. The deputy king does not automatically succeed the throne. The election is regulated by Article 32 of the Constitution of Malaysia.

The Most Esteemed Royal Family Order of Johor, is a chivalrous order awarded by the Sultan of Johor.

Tunku Abdul Jalil Iskandar ibni Sultan Ibrahim Ismail was the Tunku Laksamana of Johor. He was born to members of the Johor Royal Family and the Perak Royal Family.

Tunku Iskandar Abdul Jalil Abu Bakar Ibrahim ibni Tunku Ismail is the Raja Muda of Johor, first son and second child of the current Tunku Mahkota of Johor, Tunku Ismail Idris Abdul Majid Abu Bakar Iskandar ibni Sultan Ibrahim Ismail and his wife, Che' Puan Khaleeda Bustamam. As his father is the heir apparent, upon his birth, Tunku Iskandar become second in line of succession to the throne of Johor. He is the eldest grandson of the current Sultan of Johor, Sultan Ibrahim Ismail and his consort Permaisuri Raja Zarith Sofiah. He is also the great grandson of the Sultan Iskandar of Johor and the Sultan Idris Shah II of Perak.

Raja Iskandar Zulkarnain ibni Almarhum Sultan Idris Iskandar Al-Mutawakkil Alallahi Shah Afifullah is the Raja Di-Hilir of Perak and the second in the line of succession to the throne of the Malaysian state of Perak since 20 June 2014.

Che' Puan Besar Khaleeda binti Bustamam is the wife of Tunku Ismail Idris. Through her marriage she is the Consort of the Crown Prince of the Malaysian State of Johor.