Tuoba Liwei (Chinese :拓拔力微; pinyin :Tuòbá Lìwéi) was the first leader of the Tuoba clan of the Xianbei people, from 219-277. He was the ancestor of the future Northern Wei Dynasty and was thus posthumously honored as Emperor Shenyuan, with the temple name Shizu. Later, Emperor Wen of Western Wei changed his temple name to Taizu. 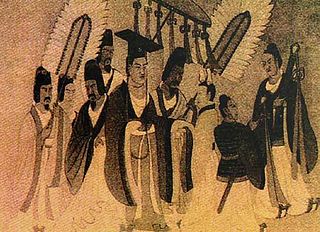 Emperor Xianwen of Northern Wei ( 魏獻文帝), personal name Tuoba Hong, Xianbei name Didouyin (第豆胤), was an emperor of the Xianbei dynasty Northern Wei. He was the first emperor in Chinese history who, after retiring at age 17 in favor of his 4-year old son Emperor Xiaowen to become Taishang Huang in 471, continued to hold on to power until his death in 476—when the official history states vaguely that he may have been killed by his stepmother Empress Dowager Feng.

Yuan He (源賀), né Tufa Poqiang (禿髮破羌), Xianbei name Hedouba (賀豆跋), formally Prince Xuan of Longxi (隴西宣王), was a high-level official of the Chinese/Xianbei dynasty Northern Wei. He was a son of Southern Liang's last prince Tufa Rutan, and after Southern Liang's destruction he fled to Northern Wei and began to serve as an official, gradually reaching positions of great power during the reigns of Emperor Wencheng and Emperor Xianwen.

Tuoba is an extinct language spoken by the Tuoba people in northern China around the 5th century AD during the Northern Wei dynasty.