Last updated December 20, 2020
Prince of the Tuoba state of Dai

Tuoba Shiyijian (Chinese :拓跋什翼犍; pinyin :Tuòbá Shíyìjiàn; 320–376) was the last prince of the Tuoba Dai and ruled from 338 to 376 when Dai was conquered by the Former Qin. He was the son of Tuoba Yulü and the younger brother of Tuoba Yihuai, whom he succeeded in 338. In 340 he moved the capital to Shengle (盛樂) (near modern Horinger County, Inner Mongolia). His grandson Tuoba Gui founded the Northern Wei dynasty.

Fu Jian, courtesy name Yonggu (永固) or Wenyu (文玉), formally Emperor Xuanzhao of (Former) Qin ( 秦宣昭帝), was an emperor of the Chinese/Di state Former Qin, under whose rule the Former Qin state reached its greatest glory—destroying Former Yan, Former Liang, and Dai and seizing Jin's Yi Province, posturing to destroy Jin as well to unite China, until he was repelled at the Battle of Fei River in 383. For a variety of reasons, the Former Qin state soon collapsed after that defeat, and Fu Jian himself was killed by his former subordinate, Yao Chang the founding emperor of Later Qin, in 385.

Murong Chui, courtesy name Daoming (道明), Xianbei name Aliudun (阿六敦), formally Emperor Chengwu of (Later) Yan ( 燕成武帝) was a great general of the Chinese/Xianbei state Former Yan who later became the founding emperor of Later Yan. He was a controversial figure in ancient China history, as his military abilities were outstanding, but as he was forced to flee Former Yan due to the jealousies of the regent Murong Ping, he was taken in and trusted by the Former Qin emperor Fu Jiān, but later betrayed him and established Later Yan, leading to a reputation of him as a traitor. Further, his reputation was damaged in that soon after his death, the Later Yan state suffered great defeats at the hands of Northern Wei Dynasty's founder Emperor Daowu, leading to the general sense that Murong Chui contributed to the defeats by not building a sound foundation for the empire and by choosing the wrong successor. Murong Chui's biography in the Book of Jin described him as seven chi and seven cun tall and having long arms.

Murong Bao, courtesy name Daoyou (道佑), Xianbei name Kugou (庫勾), formally Emperor Huimin of (Later) Yan ( 燕惠愍帝), temple name Liezong (烈宗) or Liezu (烈祖), was an emperor of the Chinese/Xianbei state Later Yan. He inherited from his father Murong Chui a sizable empire but lost most of it within a span of a year, and would be dead in less than three, a victim of a rebellion by his granduncle Lan Han. Historians largely attributed this to his irresolution and inability to judge military and political decisions. While Later Yan would last for one more decade after his death, it would never regain the power it had under Murong Chui.

Murong Lin, Xianbei name Helin (賀驎), was a general and imperial prince of the Chinese/Xianbei state Later Yan. He was a son of the founding emperor Murong Chui and a brother of Murong Bao ; for a while, he himself was a pretender to the Later Yan throne. He was known both for his abilities and his treachery, and he betrayed both his father and his brothers Murong Ling (慕容令) and Murong Bao on separate occasions. Eventually, he was executed by his uncle Murong De, the founder of Southern Yan. 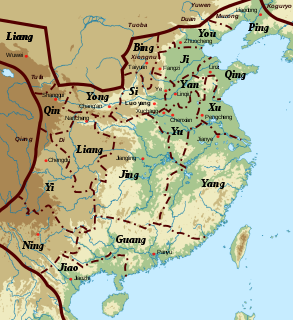