Tuoba Yituo (Chinese :拓跋猗㐌; pinyin: Tuòbá Yītuō) (died 305) was the chieftain of the central Tuoba territory from 295 to 305. He is the son of Tuoba Shamohan (拓跋沙漠汗) and the brother of Tuoba Yilu and Tuoba Fu.

Year 295 (CCXCV) was a common year starting on Tuesday of the Julian calendar, the 295th Year of the Common Era (CE) and Anno Domini (AD) designations, the 295th year of the 1st millennium, the 95th year and last 6 years of the 3rd century, and the 6th year of the 290s decade. At the time, it was known as the Year of the Consulship of Tuscus and Anullinus. The denomination 295 for this year has been used since the early medieval period, when the Anno Domini calendar era became the prevalent method in Europe for naming years. 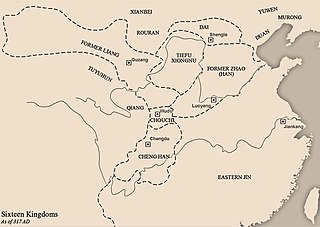 Tufa Shujineng was a Xianbei chieftain who lived during the Three Kingdoms period of China. He led a revolt in Liang Province against the Jin Dynasty (266-420) between 270 and 279. His revolt helped delayed the Jin invasion of Eastern Wu before he was finally killed in battle against the Jin general Ma Long in 279. His great-great-grandnephew, Tufa Wugu, was the founder of the Xianbei Southern Liang state during the Sixteen Kingdoms period.