ʻAhoʻeitu Tupou VI (Tongan: ‘Aho‘eitu ʻUnuakiʻotonga Tukuʻaho; born 12 July 1959) is the King of Tonga. He is the younger brother and successor of the late King George Tupou V. He was officially confirmed by his brother on 27 September 2006 as the heir presumptive to the Throne of Tonga, as his brother (a bachelor) had no legitimate children. [2] He served as Tonga's High Commissioner to Australia, and resided in Canberra [3] [4] until the death of King George Tupou V on 18 March 2012, when ʻAhoʻeitu ʻUnuakiʻotonga Tukuʻaho became King of Tonga, with the regnal name ʻAhoʻeitu Tupou VI. [5]

He was born in Nukuʻalofa, Tonga, the third son and youngest child of King Tāufaʻāhau Tupou IV.[ citation needed ] He was educated at The Leys School, Cambridge, from 1973–77.[ citation needed ] He then attended the University of East Anglia, where he read Development Studies, from 1977 to 1980. [6] He started his career in the military, joining the naval arm of the Tonga Defence Services in 1982 and becoming a Lieutenant-Commander in 1987. He graduated from the US Naval War College as part of Class 33 in 1988. From 1990 to 1995 he commanded the Pacific-class patrol boat VOEA Pangai and his time in charge included peacekeeping operations in Bougainville. He graduated with a masters in Defence Studies from the University of New South Wales in 1997 and with an MA in International Relations from Bond University in 1999.[ citation needed ]

In 1998 he ended his military career to become part of the government, first as the defence minister and the foreign minister at the same time, from October 1998 until August 2004. He took over these posts from his elder brother Tupoutoʻa, at that time still the crown prince, later to become King Siaosi Tupou V (see below). Soon he was appointed as Prime Minister on 3 January 2000, a function he kept until his sudden resignation on 11 February 2006. Its reason has never been made clear, but was probably due to the unrest from a series of pro-democracy protests calling since mid-2005 for a lesser role for the royal family in government. His appointed successor, Feleti Sevele, was Tonga's first prime minister who was not a hereditary estate holder or a member of the 33 noble families that make up the Tongan aristocracy. In 2008 ʻAhoʻeitu was appointed Tonga's first High Commissioner to Australia, a post he held until his succession to the Tongan throne in 2012. [7] In addition, he was also Ambassador to Japan from 15 January 2010 to his coronation in 2012. [8] In 2013 he was appointed as Chancellor of the University of the South Pacific. [9]

ʻAhoʻeitu is married to a daughter of the high chief Vaea, Nanasipauʻu Tukuʻaho (his second cousin) and the couple have three children and three grandchildren:[ citation needed ]

Since his confirmation as heir presumptive, he got the traditional title of Tupoutoʻa, reserved for crown princes, which his older brother (the second) had to give up because he married a commoner, while two of his previous titles went to his sons. As such he was until his accession to the throne known as Tupoutoʻa Lavaka. His elder son, Siaosi, (George) is to be addressed by the prestigious title of ʻUlukālala of Fangatongo, while his second son, Viliami, (William) was bestowed with ʻAta of Hihifo.[ citation needed ]

King Tupou VI and Queen Nanasipau’u were crowned in a ceremony conducted at Centenary Church in Nuku'alofa on 4 July 2015 by the Reverend D'Arcy Wood, a retired Uniting Church in Australia minister who was born in Tonga. He was assisted by the Reverend 'Ahio and the Reverend Tevita Havea, the president and the secretary general of the Free Wesleyan Church of Tonga. [11] The celebrations included many international invited guests, and an estimated 15,000 people, mostly expatriate Tongans, flew in to join the celebrations.[ citation needed ]

During the ceremony, Tupou VI was anointed with holy oil, adorned with a ring, and presented with a sceptre. The crown was then placed on his head by Wood, who performed the anointing and crowning as a matter of circumventing the taboo on native Tongans touching the King's head. The celebrations ran for a total of eleven days, beginning a week before the ceremony. [12]

It is customary in Tongan culture that princes get a traditional chiefly title, by which they then are commonly known. As such for many years, until his confirmation as Heir Presumptive, ʻAhoʻeitu was known by either one or all three of the titles which were bestowed on him over the time: Lavaka from Pea, ʻAta from Kolovai and ʻAtatā, and ʻUlukālala from Fangatongo. These titles may be used in any order (the one belonging to the area from which the speaker is coming usually first). Nevertheless, the sequences Lavaka Ata ʻUlukālala and ʻUlukālala Lavaka Ata were most common.[ citation needed ]

See also: List of honours of the Tongan Royal Family by country 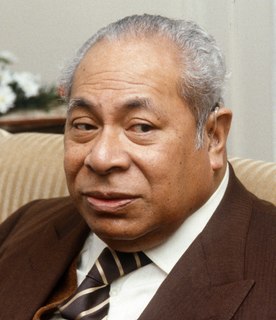 Tāufaʻāhau Tupou IV, son of Queen Sālote Tupou III and her consort Prince Viliami Tungī Mailefihi, was the king of Tonga from the death of his mother in 1965 until his own death in 2006.

Kolonga is a village and the most populated settlement located on the northeast coast of Tongatapu in the Hahake District, Kingdom of Tonga. Kolonga is a hereditary estate of Lord Nuku.

Fīnau ʻUlukālala was a dynasty of six important hereditary chiefs from Vavaʻu, currently in the kingdom of Tonga. Started somewhere in the 18th century, died out in 1960. His original estate was Tuʻanuku, and his nickname and that of the village is Tavakefaiʻana.

The order of succession to the throne of Tonga is laid down in the 1875 constitution. The crown descends according to male-preference cognatic primogeniture. Only legitimate descendants through legitimate line of King George Tupou I's son and grandson, Crown Prince Tēvita ʻUnga and Prince ʻUelingatoni Ngū, are entitled to succeed. A person loses his or her right of succession and deprives his or her descendants of their right of succession if he or she marries without the monarch's permission.

Prince Fatafehi Tu'ipelehake was the youngest son of Queen Sālote Tupou III and was educated in Tonga and Australia. Tu'ipelehake is a traditional very high-ranking Tongan title. He was the 5th Tu'ipelehake.

There are 34 traditional noble titles in the modern Kingdom of Tonga. They all are estate holders. Twenty titles were established by Siaosi Tupou I with the Constitution of 1875. In 1880 he added 11 more. Tupou II created the titles Lasike in 1894 and Veikune in 1903. Sālote Tupou III made in 1921 the title of Tupoutoʻa. In the beginning it was forbidden for a noble to have more than one title. Later this was made possible.

Nanasipauʻu Tukuʻaho, is the Queen consort of Tonga as the wife of Tupou VI, who ascended the throne in 2012.

Siaosi (George) Manumataongo ʻAlaivahamamaʻo ʻAhoʻeitu Konstantin Tukuʻaho is the crown prince of Tonga. Tupoutoʻa ʻUlukalala became heir apparent to the throne in March 2012 upon the accession of his father, Tupou VI, as King of Tonga. 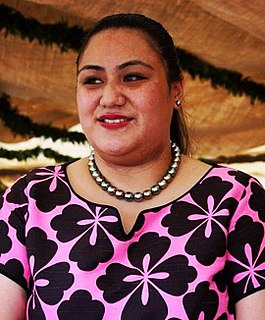 Princess Sinaitakala Tukuʻaho is a Tongan royal and wife of the Crown Prince of Tonga, Tupoutoʻa ʻUlukalala, whom she married on 12 July 2012.

Taufaʻahau Manumataongo Tukuʻaho is a Tongan royal, second in the line of succession to the Tongan throne.

Prince Ata is a Tongan royal and Prince of Tonga, younger son of Tupou VI, King of Tonga.

This is a list of foreign ministers of Tonga.