After reformation in 2015, the club won three promotions in a row, however fell into financial trouble in February 2020 and the senior team was withdrawn from the fifth division; the whole youth team structure however has remained in tact and continues to operate. [1] 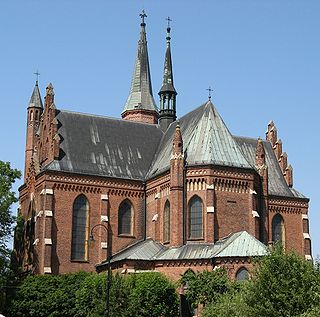 ŁKS is a Polish sports club. They are best known for their football club, but are represented in many sports such as basketball, volleyball, tennis, athletics and in the past ice hockey. The club is based at Stadion Miejski ŁKS, at Al. Unii Lubelskiej 2 in the West of Łódź. The club was founded in 1908. The football section had since been sold to private investors as the city could no longer afford to support it. After years of financial hardships, the club declared bankruptcy in May 2013. and was re-founded by a partnership between fans and local investors in the fifth tier of the league pyramid.

Stal Rzeszów is a Polish football club based in Rzeszów, Poland, as part of the multi-sports club

The 2007–08 II liga is the 60th season of the Polish II liga, the second highest division in the Polish football league system since its establishment in 1949. The league is operated by the Polish Football Association (PZPN). The league is contested by 18 teams who competing for promotion to the 2008–09 Ekstraklasa. The regular season was played in a round-robin tournament.

Ząbkovia Ząbki is a Polish professional football club, based in Ząbki, Masovian Voivodeship. The club's colors are red, white, and blue. Its biggest successes were achieved when the club was called Dolcan Ząbki.

The Mass murders in Tykocin occurred in August 25, 1941, during World War II, where the local Jewish population of Tykocin (Poland) was killed by German Einsatzkommando.

Mariusz Szyszka is a Polish former footballer, who played as a defender.

Sebastian Madera is a Polish footballer who is currently a free agent.

Trefl Sopot is a Polish professional basketball team, based in Sopot, Poland. The team plays in the Polish Tauron Basket Liga. The club was founded as the replacement of Prokom Asseco Sopot that left the city of Sopot for Gdynia in 2009.

Tomasz Ostalczyk is a Polish footballer who currently plays for Chojniczanka Chojnice.

Sebastian Zalepa is a Polish footballer who currently plays for Resovia Rzeszów.

Gerard Bieszczad is a Polish footballer who plays as a goalkeeper for Stal Rzeszów in the II liga.

Jerzy Wyrobek was a Polish football player and coach.

Damian Falisiewicz is a Polish footballer who plays as a defender for Stal Kraśnik. He formerly played for Motor Lublin, Flota Świnoujście, and Chełmianka Chełm.