Turcupichun was the toqui of the Mapuche Aillarehues in the vicinity of Concepcion, Chile and the Bio-Bio River valley from 1557 to 1558. García Hurtado de Mendoza landed in early June 1557 on the island of La Quiriquina at the mouth of the bay of San Pedro. Soon afterward he sent out messengers to the local Aillarehues to come and submit to the Spanish. Turcupichun gathered them in a great coyag where he advocated resistance to the death and elected him as their toqui replacing the dead Lautaro. [1] 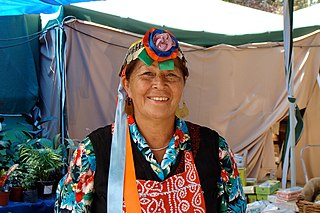 The Mapuche are a group of indigenous inhabitants of south-central Chile and southwestern Argentina, including parts of present-day Patagonia. The collective term refers to a wide-ranging ethnicity composed of various groups who shared a common social, religious and economic structure, as well as a common linguistic heritage as Mapudungun speakers. Their influence once extended from the Aconcagua River to the Chiloé Archipelago and spread later eastward to the Argentine pampa. Today the collective group makes up over 80% of the indigenous peoples in Chile, and about 9% of the total Chilean population. Mapuches are particularly concentrated in Araucanía. Many have migrated to the Santiago and Buenos Aires area for economic opportunities.

Turcupichun led his army to build a pucara on the height of Andalicán five leagues south of Concepcion covering the approach down the coast to Arauco and posted detachments to cover the crossing points on the Bio Bio River. Governor Mendoza deceived him by having a detachment build rafts at one of these crossing points but using the boats of his fleet to carry his army across at the mouth of the river. Turcupichun then engaged and was defeated by the army of Mendoza in the Battle of Lagunillas. [2] Following this defeat his army fell back and joined with Caupolicán to fight in the Battle of Millarapue. Following the battle Turcupichun was blamed by Caupolican, for the defeat when his third division marching to attack the Spanish rear did not arrive in time. Angry at the accusation he withdrew to defend his own lands. [3]

Following the execution of Caupolican, Turcupichun attempted to organize a new revolt and an attack on Concepcion, but the Spanish Corregidor of the city, Gerónimo de Villegas discovered his attempt and sent Juan Galiano with some soldiers to attack him first. Moving to where he was lodged at night Galiano captured him and some of his companions and returned with them to the city where he was hung in the plaza. After his death his army elected Lemucaguin as his successor. [4]

The Battle of Mataquito was fought in the Arauco War on April 30, 1557, between the Spanish forces of the governor, Francisco de Villagra, and Mapuche headed by their toqui Lautaro. It was a dawn surprise attack on Lautaro's fortified camp between a wooded mountain and the shore of the Mataquito River. The battle is notable for ending Mapuche pretensions to expulse the Spanish from Santiago, while also avenging the death of former governeor Pedro de Valdivia who had been killed by Lautaro's warriors four years earlier.

Battle of Quiapo in the Arauco War was the final battle in the campaign of García Hurtado de Mendoza against the Mapuche under the toqui known as Lemucaguin or Caupolicán the younger. It was fought in Quiapo, Arauco Province, Chile on the December 13, 1558.

Cayancura or Cayeucura, a Mapuche native to the region of Marigüenu, chosen as toqui in 1584, to replace the captured Paineñamcu. His one great operation was an attempted siege of the fort at Arauco that failed, leading to his abdication of his office in favor of his son Nangoniel in 1585.