The turquoise-browed motmot (Eumomota superciliosa) also known as Torogoz, is a colourful, medium-sized bird of the motmot family, Momotidae. It inhabits Central America from south-east Mexico (mostly the Yucatán Peninsula), to Costa Rica, where it is common and not considered threatened. It lives in fairly open habitats such as forest edge, gallery forest and scrubland. It is more conspicuous than other motmots, often perching in the open on wires and fences. From these perches it scans for prey, such as insects and small reptiles. White eggs (3–6) are laid in a long tunnel nest in an earth bank or sometimes in a quarry or fresh-water well. Its name originates from the turquoise color of its brow. It was first declared as the official national bird of El Salvador in 1999, where the bird is known as Torogoz.

The bird is approximately 34 cm (13 in) long and weighs about 65 g (2.3 oz). It has a mostly grey-blue body with a rufous back and belly. There is a bright blue strip above the eye and a blue-bordered black patch on the throat. The flight feathers and upperside of the tail are blue. The tips of the tail feathers are shaped like rackets and the bare feather shafts are longer than in other motmots. Although it is often said that motmots pluck the barbs off their tail to create the racketed shape, this is not true; the barbs are weakly attached and fall off due to abrasion with substrates and with routine preening. [2]

Unlike most bird species, where only males express elaborate traits, the turquoise-browed motmot expresses the extraordinary racketed tail in both sexes. Research indicates that the tail has evolved to function differently for the sexes. Males apparently use their tail as a sexual signal, as males with longer tails have greater pairing success and reproductive success. [3] In addition to this function, the tail is used by both sexes in a wag-display, whereby the tail is moved back-and-forth in a pendulous fashion. [4] The wag-display is performed in a context unrelated to mating: both sexes perform the wag-display in the presence of a predator, and the display is thought to confer naturally selected benefits by communicating to the predator that it has been seen and that pursuit will not result in capture. This form of interspecific communication is referred to as a pursuit-deterrent signal. [5]

The call is nasal, croaking and far-carrying.

The turquoise-browed motmot is a well-known bird in its range and has been chosen as the national bird of both El Salvador and Nicaragua. [6] [7] It has acquired a number of local names including guardabarranco ("ravine-guard") in Nicaragua, Torogoz in El Salvador (based on its call) and pájaro reloj ("clock bird") in the Yucatán, based on its habit of wagging its tail like a pendulum. In Costa Rica it is known as momoto cejiceleste or the far-less flattering pájaro bobo ("foolish bird"), owing to its tendency to allow humans to come very near it without flying away.

The brown jay is a large American jay which has the habitus of a magpie, but is slightly smaller and with a shorter tail, though the bill is larger.

The motmots or Momotidae are a family of birds in the near passerine order Coraciiformes, which also includes the kingfishers, bee-eaters and rollers. All extant motmots are restricted to woodland or forests in the Neotropics, and the largest are in Middle America. They have a colourful plumage and a relatively heavy bill. All except the tody motmot have relatively long tails that in some species have a distinctive racket-like tip.

Momotus is a small genus of the motmots, a family of near passerine birds found in forest and woodland of the Neotropics. They have a colourful plumage, which is green on the back becoming blue on the flight feathers and the long tails. The barbs near the ends of the two longest central tail feathers fall off, leaving a length of bare shaft so that tails appear racket-shaped.

The spectacled owl is a large tropical owl native to the neotropics. It is a resident breeder in forests from southern Mexico and Trinidad, through Central America, south to southern Brazil, Paraguay and northwestern Argentina. There are six subspecies. One is occasionally treated as a separate species called the short-browed or brown spectacled owl but the consensus is that it is still merely a race until more detailed analysis can be done.

The melodious blackbird is a New World tropical bird.

The rufous motmot is a near-passerine bird which is a resident breeder in rain forests from northeastern Honduras south to western Ecuador, northeastern Bolivia, and southwestern Brazil.

Canivet's emerald or the fork-tailed emerald, is a species of hummingbird in the family Trochilidae. It is found in Belize, Costa Rica, El Salvador, Guatemala, Honduras, Mexico, and Nicaragua. Its natural habitats are subtropical or tropical dry forest, subtropical or tropical moist lowland forest, and heavily degraded former forest. 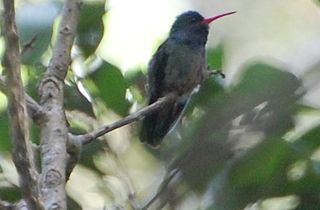 The blue-throated sapphire, also known as the blue-throated goldentail, is a species of hummingbird in the family Trochilidae. It is found in Belize, Colombia, Costa Rica, El Salvador, Guatemala, Honduras, Mexico, Nicaragua, and Panama. Its natural habitats are subtropical or tropical moist lowland forest and heavily degraded former forest.

The keel-billed motmot is a species of bird in the motmot family Momotidae. It is very closely related to the broad-billed motmot, and the two may be the same species. The two are similar sizes and shapes, and have been reported to have similar calls, but they do have different plumage. 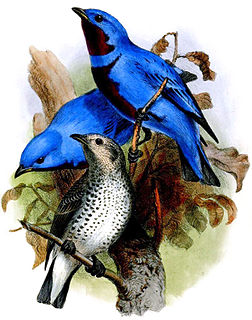 The lovely cotinga is a species of bird in the family Cotingidae. It is found in North and Central America from southern Mexico through Guatemala, Belize, Honduras and Nicaragua to Costa Rica with reports from western Panama. Its natural habitats are tropical moist lowland forests and heavily degraded former forest. The male is a bright turquoise blue while the female is greyish-brown with pale underparts. Because of its total population size and wide range, this species is not yet considered vulnerable.

The spot-breasted oriole is a species of bird in the family Icteridae.

Dúo Guardabarranco was a Nicaraguan duo consisting of siblings Katia Cardenal and Salvador Cardenal. The duo has been a significant worldwide ambassador for Nicaraguan and Latin-American folk music for the last three decades, and has gained a broad international audience with their poetic lyrics about hope, peace and justice, wrapped in their outstanding harmonies and melodies. They are named after the Nicaraguan national bird, the Turquoise-browed motmot, locally referred to as Guardabarranco.

The Andean motmot or highland motmot is a colorful near-passerine bird found in the forests and woodlands from northern Colombia to western Bolivia. This bird can be also found in El Salvador, Guatemala, Honduras, Nicaragua, and the west area of Costa Rica.

The gray hawk or Mexican goshawk is a smallish raptor found in open country and forest edges. It is sometimes placed in the genus Asturina as Asturina plagiata. The species was split by the American Ornithological Society (AOU) from the gray-lined hawk. The gray hawk is found from Costa Rica north into the southwestern United States.