Turznica [tuʐˈnit͡sa] (German : Forsthaus Arneburg) is a settlement in the administrative district of Gmina Police, within Police County, West Pomeranian Voivodeship, in north-western Poland, close to the German border. [1]

The Geheime Staatspolizei, abbreviated Gestapo, was the official secret police of Nazi Germany and in German-occupied Europe. 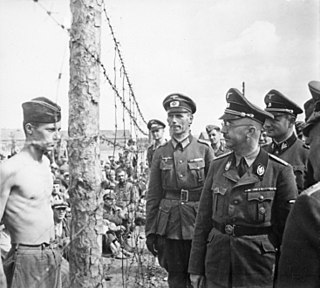 The Schutzstaffel was a major paramilitary organization under Adolf Hitler and the Nazi Party in Nazi Germany, and later throughout German-occupied Europe during World War II.

Before 1933, homosexual acts were illegal in Germany under Paragraph 175 of the German Criminal Code. The law was not consistently enforced, however, and a thriving gay culture existed in German cities. After the Nazi takeover in 1933, the first homosexual movement's infrastructure of clubs, organizations, and publications was shut down. After the Röhm purge in 1934, persecuting homosexuals became a priority of the Nazi police state. A 1935 revision of Paragraph 175 made it easier to bring criminal charges for homosexual acts, leading to a large increase in arrests and convictions. Persecution peaked in the years prior to World War II and was extended to areas annexed by Germany, including Austria, the Czech lands, and Alsace–Lorraine. 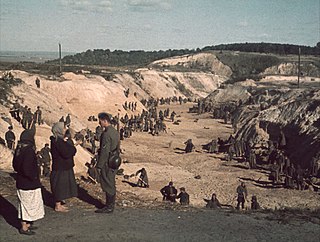 Babi Yar or Babyn Yar is a ravine in the Ukrainian capital Kyiv and a site of massacres carried out by Nazi Germany's forces, Ukrainian police, and other Ukranian collaborators during its campaign against the Soviet Union in World War II. The first and best documented of the massacres took place on 29–30 September 1941, killing some 33,771 Jews. The decision to murder all the Jews in Kyiv was made by the military governor Generalmajor Kurt Eberhard, the Police Commander for Army Group South, SS-Obergruppenführer Friedrich Jeckeln, and the Einsatzgruppe C Commander Otto Rasch. Sonderkommando 4a as the sub-unit of Einsatzgruppe C, along with the aid of the SD and Order Police battalions with the Ukrainian Auxiliary Police backed by the Wehrmacht, carried out the orders. Sonderkommando 4a and the 45th Battalion of the German Order Police conducted the shootings. Servicemen of the 303rd Battalion of the German Order Police at this time guarded the outer perimeter of the execution site. 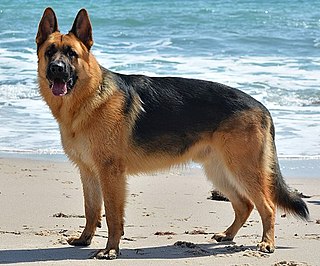 The German ShepherdDog, also known as the Alsatian, is a German breed of working dog of medium to large size. The breed was developed by Max von Stephanitz using various traditional German herding dogs from 1899.

Secret police are intelligence, security or police agencies that engage in covert operations against a government's political opponents and dissidents. Secret police organizations are characteristic of authoritarian and totalitarian regimes. They protect the political power of a dictator or regime, and often operate outside the law to repress dissidents and weaken political opposition, frequently using violence.

A police dog is a dog that is specifically trained to assist police and other law-enforcement personnel. Their duties include: searching for drugs and explosives, locating missing people, finding crime scene evidence, protecting people, and attacking criminals who are fleeing from or attacking police officers. Police dogs must remember several verbal cues and hand gestures. The most commonly used breeds are the German Shepherd, Belgian Malinois, Bloodhound, Dutch Shepherd, and the retriever breeds. Recently, the Belgian Malinois has become the dog of choice for police and military work due to their intense drive and focus. Malinois are smaller and more agile than German Shepherd Dogs, and have fewer health issues. However, a well-bred working line German Shepherd Dog is just as successful and robust as a Malinois. 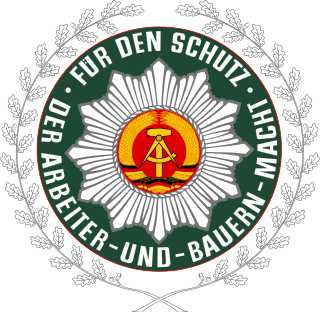 The Deutsche Volkspolizei, commonly known as the Volkspolizei or VoPo, was the national police force of the German Democratic Republic from 1945 to 1990. The Volkspolizei was a highly-centralized agency responsible for most civilian law enforcement in East Germany, maintaining 257,500 personnel at its peak. 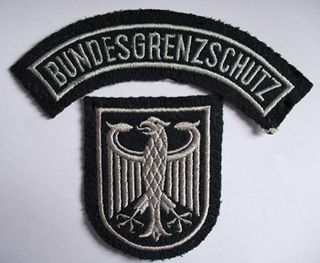 Bundesgrenzschutz is the former name of a special German Bundespolizei unit. Established on 16 March 1951 as a subordinate agency of the Federal Ministry of the Interior, the BGS originally was primarily focused on protecting the West German borders. During their early days, BGS units had military structures, training and equipment. The law enforcement officers legally had military combatant status until 1994. A major part of the early BGS personnel joined the newly founded German Armed Forces (Bundeswehr) in 1956 and thus significantly contributed to West Germany's rearmament. The BGS was renamed to Bundespolizei on 1 July 2005. The change of name did not have any effect on the legal status or competencies of the agency, but rather reflects its transition to a multi-faceted police agency with control over border, railway and air security. 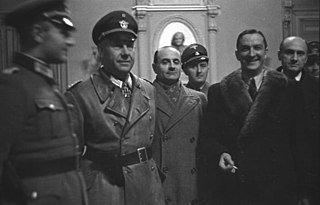 The Sicherheitspolizei, often abbreviated as SiPo, was a term used in Germany for security police. In the Nazi era, it referred to the state political and criminal investigation security agencies. It was made up by the combined forces of the Gestapo and the Kriminalpolizei between 1936 and 1939. As a formal agency, the SiPo was incorporated into the Reich Security Main Office (RSHA) in 1939, but the term continued to be used informally until the end of World War II in Europe.

The title of SS and Police Leader designated a senior Nazi Party official who commanded various components of the SS and the German uniformed police (Ordnungspolizei), prior to and during World War II in the German Reich proper and in occupied territories. 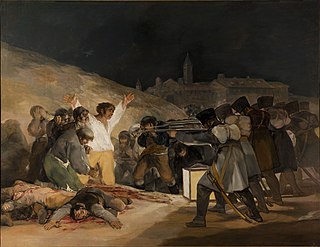 A summary execution is an execution in which a person is accused of a crime and immediately killed without the benefit of a full and fair trial. Executions as the result of summary justice are sometimes included, but the term generally refers to capture, accusation, and execution all conducted within a very short period of time, and without any trial. Under international law, refusal to accept lawful surrender in combat and instead killing the person surrendering is also categorized as a summary execution. 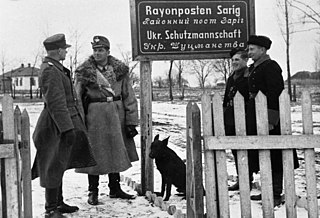 The Schutzmannschaft or Auxiliary Police was the collaborationist auxiliary police of native policemen serving in those areas of the Soviet Union and the Baltic states occupied by Nazi Germany during World War II. Heinrich Himmler, head of the SS, established the Schutzmannschaft on 25 July 1941, and subordinated it to the Order Police. By the end of 1941, some 45,000 men served in Schutzmannschaft units, about half of them in the battalions. During 1942, Schutzmannschaften expanded to an estimated 300,000 men, with battalions accounting for about a third, or less than one half of the local force. Everywhere, local police far outnumbered the equivalent German personnel several times; in most places, the ratio of Germans to natives was about 1-to-10.

Within nations occupied by the Axis powers in World War II, some citizens and organizations, prompted by nationalism, ethnic hatred, anti-communism, antisemitism, opportunism, self-defense, or often a combination, knowingly collaborated with the Axis Powers. Some of these collaborators committed war crimes, crimes against humanity, or atrocities in the Holocaust. 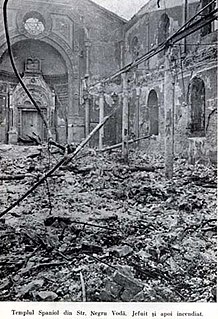 Between 21 and 23 January 1941, a rebellion of the Iron Guard paramilitary organization, whose members were known as Legionnaires, occurred in Bucharest, Romania. As their privileges were being gradually removed by the Conducător Ion Antonescu, the Legionnaires revolted. During the rebellion and subsequent pogrom, the Iron Guard killed 125 Jews, and 30 soldiers died in the confrontation with the rebels. Following this, the Iron Guard movement was banned and 9,000 of its members were imprisoned. 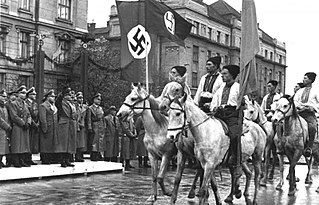 Collaboration with Nazi Germany at the territory of Soviet Ukraine took place during the occupation of what is now Ukraine by Nazi Germany in World War II.

The following outline is provided as an overview of and topical guide to Germany: Vichy France is the common name of the French State headed by Marshal Philippe Pétain during World War II. The regime was authoritarian, xenophobic, antisemitic, corporatist and traditionalist in nature. Officially independent, it adopted a policy of collaboration with Nazi Germany, which occupied its northern and western portions before occupying the remainder of Metropolitan France in November 1942. Though Paris was ostensibly its capital, the Vichy government established itself in the resort town of Vichy in the unoccupied "Free Zone", where it remained responsible for the civil administration of France as well as its colonies.

The Ukrainische Hilfspolizei or the Ukrainian Auxiliary Police was the official title of the local police formation set up by Nazi Germany during World War II in Reichskommissariat Ukraine, shortly after the German conquest of the Ukrainian Soviet Socialist Republic in Operation Barbarossa against the Soviet Union, Germany's former co-belligerent in the invasion of Poland.

The Holocaust in Ukraine took place in the Reichskommissariat Ukraine, the General Government, Crimean General Government and some areas under military control to the East of Reichskommissariat Ukraine, in the Transnistria Governorate and Northern Bukovina and Carpathian Ruthenia in World War II. The listed areas are today part of Ukraine. Between 1941 and 1944, more than a million Jews living in the Soviet Union were murdered by Nazi Germany's "Final Solution" extermination policies. Most of them were killed in Ukraine because most pre-WWII Soviet Jews lived in the Pale of Settlement, of which Ukraine was the biggest part.