The beginnings of Twardogóra go back to the times of Polish rule under the first Piast dynasty. It was then a trade settlement connected to the trade route from Wrocław to Poznań. It was inhabited by Poles, descendants of the Silesians tribe, and from the 12th century also settlers from other countries, especially from the German states, came to Twardogóra. [2] The modern name of the town is said to have been created during the First Mongol invasion of Poland in 1241. The inhabitants of the settlement gave the Mongols a hard resistance and hence the name, which means in Polish "Hard Mountain". [3] Its name also covers terrain topography (Twarda Góra). [3] Town rights were given to Twardogóra by Henry III, Duke of Głogów on August 1, 1293. Although Polish, the town was first mentioned as Vestenberg in 1293. From the beginning of the 14th century, Twardogóra was part of the Duchy of Oleśnica, which remained under the rule of the Polish Piast dynasty until 1492, although as a fief of the Kingdom of Bohemia.

Residents of the city remembered the unpleasant experiences of the Hussite Wars in the late 15th century building a defensive structure. A hundred years later a castle was built there. [2]

In 1526, Twardogóra and the Duchy of Oleśnica (Oels) came under the suzerainty of the Habsburg monarchy. At that time, duke John, from the Czech noble Podiebrad family, introduced Lutheranism in 1538. It is presumed that at that time there was already a church (lower) in the city, which was thoroughly renovated in 1587. [4] The Duchy of Oels from 1647 was under the rule of dukes of Württemberg. During its rule, Twardogóra flourished. Change in Twardogóra was foremost contributed to by Dutches Eleonora Karolina Wirtemberska (1676–1712). She rebuilt and expanded the town's castle into a Baroque palace. She also took care of the health of the people, the development of the craft, trade and education, as well as the development of charities. [2]

In the years 1729–1738 the church was rebuilt giving it its present shape. In 1742 Silesia became part of the Kingdom of Prussia and the town came under Prussian suzerainty, remaining part of the Duchy of Oleśnica. In 1743 Henryk L. von Reichenbach brought the town hardwood, and the town joined the newly created state country in Goszcz a year later. In 1786 the town was inhabited by 1175 people, among whom the most prosperous at the time were the weavers.

At the beginning of the 19th century, two new cemeteries were set up outside the city, separate for Protestants and Catholics, and the old church cemetery was demolished. Catholics built a church in 1869 near the new market. In 1873, a fire destroyed the evangelical church, which was rebuilt three years later in Gothic Revival style. [4] From the middle of the 19th century Twardogóra began to acquire industrial character. Henryk Piirschel founded a mechanical weaving factory in 1852, and Henry Lichtenberg began industrial furniture production. Until 1945 the town was part of Germany.

The demographic development of the town in the 19th century (in 1885 – 2202 people, and after the merger with the Old Twardogóra in 1910 – 3351 people) caused an increase in the town's infrastructure. Before the World War I, a credit bank (1901), a printing house (1907), a court and detention center (1902), a town hall, a cemetery chapel (1906), a town hall (1912) and a new water supply (1901) and electrification of the city was conducted (1910). [2] In 1944, the town was home to 4500 people, who primarily engaged in craft, trade and services. The town had, among other things, an agricultural and general school, two cinemas, a hospital, a child's home and extensive gastronomy. German rule ended in Twardogóra on January 23, 1945, when it came under Polish administration. As a result of Nazi Germany's defeat in World War II, the town was transferred to Poland in accordance with the Potsdam Agreement.

Głogów is a town in western Poland. It is the county seat of Głogów County, in Lower Silesian Voivodeship, and was previously in Legnica Voivodeship (1975–1998). Głogów is the sixth largest town in the Voivodeship; according to the 2004 census estimate the town had a total population of 71,686. The name of the town derives from głóg, the Polish name for hawthorn. 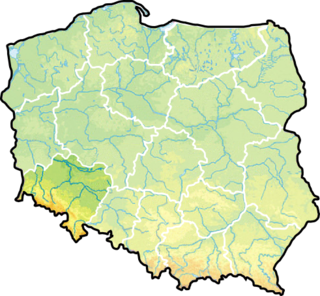 Kędzierzyn-Koźle(listen) is a town in southern Poland, the administrative center of Kędzierzyn-Koźle County. With 54,872 inhabitants as of 2020, it is the second most-populous town in the Opole Voivodeship.

Brzeg is a town in southwestern Poland with 35,226 inhabitants (2020) and the capital of Brzeg County. It is situated in Silesia in the Opole Voivodeship on the left bank of the Oder river.

Kluczbork(listen) is a town in southern Poland with 23,554 inhabitants (2019), situated in the Opole Voivodeship. It is the capital of Kluczbork County and an important railroad junction. In Kluczbork the major rail line from Katowice splits into two directions – westwards to Wrocław and northwards to Poznań. It is also connected with Fosowskie.

Oleśnica is a town in Lower Silesian Voivodeship, in south-western Poland, within the Wrocław metropolitan area. It is the administrative seat of Oleśnica County and also of the rural district of Gmina Oleśnica, although it is not part of the territory of the latter, the town being an urban gmina in its own right.

Wołów is a town in Lower Silesian Voivodeship in south-western Poland. It is the seat of Wołów County and Gmina Wołów. It lies approximately 38 kilometres north-west of the regional capital Wrocław. As of 2019, the town has a population of 12,373. It is part of the larger Wrocław metropolitan area. 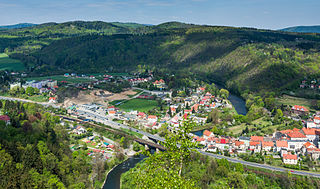 Bardo is a historical town in Ząbkowice Śląskie County, Lower Silesian Voivodeship, in south-western Poland. It is the seat of the administrative district (gmina) called Gmina Bardo. 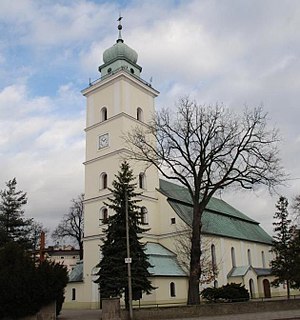 Wołczyn is a town in Kluczbork County, Opole Voivodeship, southern Poland, with 5,907 inhabitants as of 2019. According to 2011 data, it covers 7.47 square kilometres, and is the seat of Gmina Wołczyn. It is located within the historic region of Lower Silesia.

Żmigród is a town in Trzebnica County, Lower Silesian Voivodeship, in south-western Poland. It is the seat of the administrative district (gmina) called Gmina Żmigród. 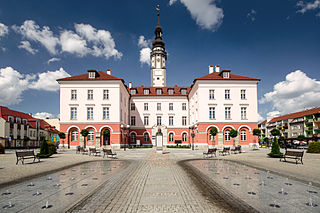 Grodków(listen) is a town in Brzeg County, Opole Voivodeship in Poland, the administrative seat of Gmina Grodków. It is located in the Silesian Lowlands of the Oder basin, in the historic Upper Silesia region, about 20 km (12 mi) south of Brzeg. In the north it has access to the A4 autostrada. The town has 8,595 inhabitants (2019). 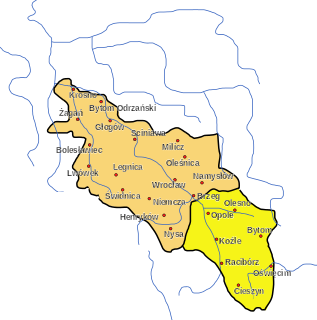 Ścinawa is a town and municipality on the Oder river in the Lower Silesian region of Poland. The Ścinawa train station is a key gateway for travel throughout the region, connecting major destinations such as Wrocław and Głogów. As of 2019, the town's population is 5,582. Between 1975 and 1998, Ścinawa was in Legnica Voivodeship. It is now part of Lubin County in Lower Silesian Voivodeship, and is the seat of the municipality called Gmina Ścinawa. 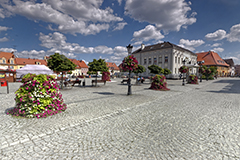 Milicz is a town in Lower Silesian Voivodeship, in west-central Poland. It is the seat of Milicz County and of Gmina Milicz, part of the larger Wrocław metropolitan area. 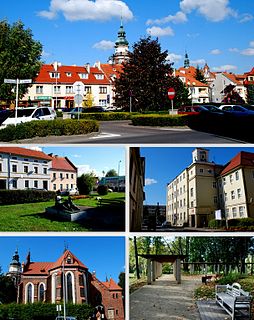 Syców is a town in Oleśnica County, Lower Silesian Voivodeship, in south-western Poland. It is the seat of the administrative district (gmina) called Gmina Syców and part of the larger Wrocław metropolitan area. 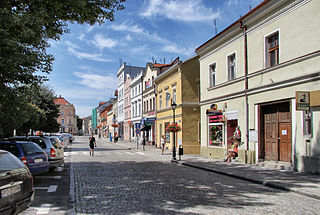 Kąty Wrocławskie, often abbreviated to Kąty, is a town in Wrocław County, Lower Silesian Voivodeship, in south-western Poland. It is the seat of the administrative district (gmina) called Gmina Kąty Wrocławskie.

Międzybórz, also known as Międzybórz Sycowski, is a town in Oleśnica County, Lower Silesian Voivodeship, in south-western Poland. It is the seat of the administrative district (gmina) called Gmina Międzybórz. 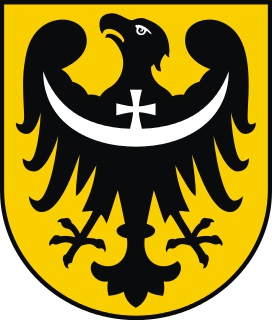 The Duchy of Oels or Duchy of Oleśnica was one of the duchies of Silesia with its capital in Oleśnica in Lower Silesia, Poland. Initially ruled by the Silesian Piasts, it was acquired by the Münsterberg (Ziębice) dukes of the Podiebrad family from 1495 and was inherited by the House of Württemberg in 1649. Conquered by Prussia in 1742, it was enfeoffed to the Welf dukes of Brunswick-Lüneburg from 1792 until its dissolution in 1884.