The Festivals of the Twin Birthdays or the Twin Holy Birthdays refers to two successive holy days in the Baháʼí calendar that celebrate the births of two central figures of the Baháʼí Faith. The two holy days are the birth of the Báb on the first day of Muharram in the Islamic calendar (20 October 1819) and the birth of Baháʼu'lláh on the second day of Muharram (two years prior, on 12 November 1817). [1] [2] [3]

They are observed on the first and the second day following the occurrence of the eighth new moon after Naw-Rúz, as determined in advance by astronomical tables using Tehran as the point of reference. [4] This results in the observance of the Twin Birthdays moving, year to year, within the months of Mashíyyat, ʻIlm, and Qudrat of the Baháʼí calendar, or from mid-October to mid-November in the Gregorian calendar. [5]

Prior to 2015 and a decision by the Universal House of Justice, these two holy days had been observed on the first and second days of Muharram in the Islamic lunar calendar in the Middle East, while other countries observed them according to the Gregorian calendar on 20 October (for the birth of the Báb) and 12 November (for the birth of Baháʼu'lláh). [2]

On the occasion of the 200th anniversaries of the births of the Báb and Baháʼu'lláh in 2017 and 2019, special celebrations were organized worldwide. [6] [7] In October 2017 the Universal House of Justice sent a letter to "all who celebrate the Glory of God", on the meaning of Baháʼu'lláh's life and current Baháʼí activities, inspired by the 200th anniversary of his birth. [8]

Days in the Baha'i calendar begin at sunset. In the following table, the Baha'i date should be understood as starting at sunset on the day before the first Gregorian date listed for each year.

In the Kitáb-i-Aqdas , Baháʼu'lláh wrote that his birthday and that of Báb "are accounted as one in the sight of God". [2] 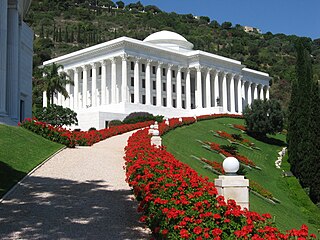 The Baháʼí Faith is a new religion teaching the essential worth of all religions, and the unity of all people. Established by Baháʼu'lláh in 1863 in Baghdad, Iraq. It initially grew in Persia and parts of the Middle East, where it has faced ongoing persecution since its inception. It is estimated to have between five and eight million adherents, known as Baháʼís, spread throughout most of the world's countries and territories. 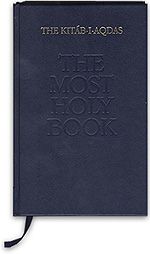 The Kitáb-i-Aqdas is the central book of the Baháʼí Faith written by Baháʼu'lláh, the founder of the religion, in 1873. Though it is the main source of Baháʼí laws and practices, much of the content deals with other matters, like foundational principles of the religion, the establishment of Baháʼí institutions, mysticism, ethics, social principles, and prophecies. In Baha'i literature it is described as "the Mother-Book" of the Baháʼí teachings, and the "Charter of the future world civilization".

The Badíʻ calendar used in the Baháʼí Faith is a solar calendar consisting of 19 months and 4-5 Intercalary Days, with new year at the northern spring equinox. Each month is named after virtues, as are the days of the week. The first year is dated from 1844 CE, the year in which the Báb began teaching.

Riḍván is a twelve-day festival in the Baháʼí Faith, commemorating Baháʼu'lláh's declaration that he was a Manifestation of God. In the Baháʼí calendar, it begins at sunset on the 13th of Jalál, which translates to the 20th or 21st of April, depending on the date of the March equinox. On the first, ninth and twelfth days of Ridván, work and school should be suspended.

The following is a basic timeline of the Bábí and Baháʼí religions emphasizing dates that are relatively well known. For a more comprehensive chronology of the timeline, see the references at the bottom.

Baháʼí laws are laws and ordinances used in the Baháʼí Faith and are a fundamental part of Baháʼí practice. The laws are based on authenticated texts from Baháʼu'lláh, the founder of the Baháʼí Faith, and also includes subsequent interpretations from ʻAbdu'l-Bahá and Shoghi Effendi, and legislation by the Universal House of Justice. Baháʼí law is presented as a set of general principles and guidelines and individuals must apply them as they best seem fit. While some of the social laws are enforced by Baháʼí institutions, the emphasis is placed on individuals following the laws based on their conscience, understanding and reasoning, and Baháʼís are expected to follow the laws for the love of Baháʼu'lláh. The laws are seen as the method of the maintenance of order and security in the world.

Baháʼí history is often traced through a sequence of leaders, beginning with the Báb's declaration in Shiraz on the evening of May 22, 1844, and ultimately resting on an Administrative Order established by the central figures of the religion. The religion had its background in two earlier movements in the nineteenth century, Shaykhism and Bábism. Shaykhism centred on theosophical doctrines and many Shaykhis expected the return of the hidden Twelfth Imam. Many Shaykhis joined the messianic Bábí movement in the 1840s where the Báb proclaimed himself to be the return of the hidden Imam. As the Bábí movement spread in Iran, violence broke out between the ruling Shiʻa Muslim government and the Bábís, and ebbed when government troops massacred them, and executed the Báb in 1850.

Baháʼí literature, like the literature of many religions, covers a variety of topics and forms, including scripture and inspiration, interpretation, history and biography, introduction and study materials, and apologia. Sometimes considerable overlap between these forms can be observed in a particular text.

The Nineteen-Day Fast is a nineteen-day period of the year during which members of the Baháʼí Faith adhere to a sunrise-to-sunset fast. Along with obligatory prayer, it is one of the greatest obligations of a Baháʼí, and its chief purpose is spiritual: to reinvigorate the soul and bring the person closer to God. The fast was instituted by the Báb, and accepted by Baháʼu'lláh, the founder of the Baháʼí Faith, who stated its rules in his book of laws, the Kitáb-i-Aqdas. The nineteen days of fasting occur immediately before the beginning of the Baháʼí New Year, on the vernal equinox.

The Baháʼí Faith has eleven holy days, which are important anniversaries in the history of the religion. On nine of these holy days, work is suspended. There is no fixed format for any of the holy days, and Baháʼí communities organize their own commemorative meetings.

Ayyám-i-Há refers to a period of intercalary days in the Baháʼí calendar, when Baháʼís celebrate the Festival of Ayyám-i-Há. The four or five days of this period are inserted between the last two months of the calendar. The length of Ayyám-i-Há varies according to the timing of the following vernal equinox so that the next year always starts on the vernal equinox.

Naw-Rúz is the first day of the Baháʼí calendar year and one of nine holy days for adherents of the Baháʼí Faith. It occurs on the vernal equinox, on or near March 21,which is the traditional Iranian New Year.

The Day of the Covenant is the day when Baháʼís celebrate the appointment of ʻAbdu'l-Bahá as the Centre of Baha'u'llah's Covenant. It occurs yearly on the 4th day of Speech (Qawl) which coincides with either November 25 or 26 depending on when Naw Ruz falls on that year. The 2019 date is November 26. 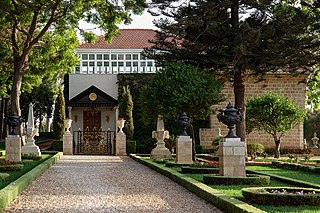 Baháʼu'lláh was a Persian religious leader, and the founder of the Baháʼí Faith, which advocates universal peace and unity among all races, nations, and religions.

Zoroastrianism is recognized in the Baháʼí Faith as one of nine known religions and its scriptures are regarded as predicting the coming of Baháʼu'lláh. Zoroaster is included in the succession of Manifestations of God. The authenticity of the Zend Avesta is seen as uncertain.

The Baháʼí World Centre is the name given to the spiritual and administrative centre of the Baháʼí Faith. The World Centre consists of the Shrine of Baháʼu'lláh near Acre, Israel, the Shrine of the Báb and its gardens on Mount Carmel in Haifa, Israel, and various other buildings in the area including the Arc buildings.

The following outline is provided as an overview of and a topical guide to the Baháʼí Faith.