The Type 81 (Chinese :81式自动步枪; literally; "Type 81 Automatic Rifle") is a Chinese-designed second-generation, selective-fire, gas-operated 7.62×39mm rifle (based on Kalashnikov and SKS actions) adopted by the Chinese People's Liberation Army (PLA) and has been in service since the mid-1980s.

The PLA's first attempt to replace their aging SKS and Type 56 assault rifle (a Chinese license produced AK-47) was the Type 63 assault rifle. [4] This weapon, however, ended in failure due to a variety of issues resulting in a switch back to the weapons it intended to replace. The beginning of the Sino-Vietnamese border conflicts however, showed the PLA that their SKS and Type 56s were not as effective as they thought, causing their small arms development program to spring back to life. [4]

The weapon was introduced into PLA service in 1981 but did not become widely distributed until the late 1980s. It replaced the SKS, [5] the Type 56 assault rifle and even the RPD machine gun (LMG version), succeeding where the Type 63 failed. Its first combat use came during the latter part of the Sino-Vietnamese border conflicts of the mid-1980s. [6] The PLA has replaced most of its Type-81s with the Type 95 or Type 03 series of weapons, though it is still in service in the reserves and armed police.

An improved version is also used by the Bangladesh Army under the designation BD-08. [7]

The Type 81 incorporates elements of the Dragunov, SKS, and AK series rifles. The design criteria it met included accuracy of 1.78 inch R50, that is 50% of the hits within a 1.78 inch diameter at 100 meters; improved controllability in full-automatic; the same reliability of the AK but a longer service life to approximately 20,000 rounds; and able to use existing AK and SKS production tooling at the time. [8] Development was placed under Wang Zi Jun after the end of the Sino-Vietnamese border clashes in 1979. [6]

The rifle retains the general layout of the Chinese Type 56 assault rifle, but it has a SKS-like short-stroke gas-piston design and other improvements to reduce recoil and muzzle jump, giving better firing accuracy. Notable physical differences from the Type 56 assault rifle include the stock of the rifle, the length of the action, bayonet, and the positioning of the front sight. [9]

The most easily distinguishable feature of the Type 81 is the more exposed muzzle part of the barrel. The front sight has been moved back as a modification to be able to fire 22mm rifle grenades, which are slid over the unobstructed barrel muzzle now formed into a spigot-type rifle grenade launcher. [9]

The non-detachable swing-out spike-shaped bayonet of the Type 56 rifle was also replaced on Type 81 rifles with the detachable Type 81 knife-bayonet. [10]

Like its predecessors, the Type 81 is a series of weapons. The Type 81 (fixed stock) and Type 81-1 (folding stock) are 7.62×39mm caliber assault rifles with 30-round magazines, and the heavier Type 81 light machine gun (LMG) fitted with a 75-round drum magazine is used in the squad automatic weapon (SAW) role. [9] Its sight remains at the front of the LMG barrel.

The Type 81 can be fitted with a Picatinny rail, bipod, foregrip, and flashlight. [11] One such attempt to market picatinny rails for the Type 81 came from Bao Wa, a Hong Kong-based law enforcement supplier. [12]

The AK-47, officially known as the Avtomat Kalashnikova, is a gas-operated, 7.62×39mm assault rifle developed in the Soviet Union by Mikhail Kalashnikov in the aftermath of World War II. It is the originating firearm of the Kalashnikov rifle family. The number 47 refers to the year it was finished. 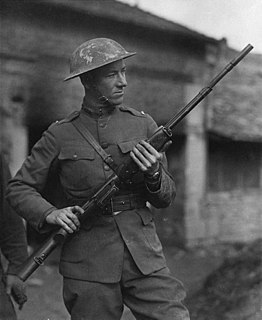 The SKS (Samozaryadny Karabin sistemy Simonova, 1945 is a semi-automatic carbine chambered for the 7.62×39mm round, designed in 1943 by Sergei Gavrilovich Simonov. A reliable, simply designed, and relatively inexpensive weapon, the SKS was first produced in the Soviet Union but later widely exported and manufactured by various nations. Its distinguishing characteristics include a permanently attached folding bayonet and a hinged, fixed magazine. As the SKS lacked select-fire capability and its magazine was limited to ten rounds, it was rendered obsolete in the Soviet Armed Forces by the introduction of the AK-47 in the 1950s. Nevertheless, SKS carbines continued to see service with the Soviet Border Troops, Internal Troops, and second-line and reserve army units for decades.

The Type 56 also known as the AK-56, is a Chinese 7.62×39mm rifle. It is a variant of the Soviet-designed AK-47 and AKM rifles. Production started in 1956 at State Factory 66 but was eventually handed over to Norinco and PolyTech, who continue to manufacture the rifle primarily for export.

The RPK is a 7.62×39mm light machine gun of Soviet design, developed by Mikhail Kalashnikov in the early 1960s, parallel with the AKM assault rifle. It was created as part of a program designed to standardize the small arms inventory of the Soviet Army, where it replaced the 7.62×39mm RPD light machine gun. The RPK continues to be used by the armed forces of countries of the former Soviet Union and certain African and Asian nations. The RPK is also manufactured in Bulgaria, Romania and Serbia.

INSAS is a family of infantry arms consisting of an assault rifle and a light machine gun (LMG). It is manufactured by the Ordnance Factories Board at Ordnance Factory Tiruchirappalli, Small Arms Factory Kanpur and Ishapore Arsenal. The INSAS assault rifle was the standard infantry weapon of the Indian Armed Forces. 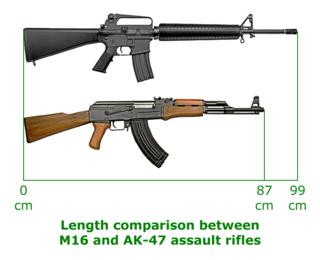 The two most common rifles in the world are the Soviet AK-47 and the American M16. These Cold War-era rifles have been used in conflicts both large and small since the 1960s. They are used by military, police, security forces, revolutionaries, terrorists, criminals and civilians alike and will most likely continue to be used for decades to come. As a result, they have been the subject of countless comparisons and endless debate.

The 5.8×42mm / DBP87 is a military rimless bottlenecked intermediate cartridge developed in the People's Republic of China. There is limited information on this cartridge, although the People's Liberation Army says that it is superior to the 5.56×45mm NATO and Soviet 5.45×39mm cartridges. Another variant called the DBP88 "heavy round" was designed specifically for squad automatic weapons and designated marksman rifles. The 5.8×42mm "heavy round" cartridge has the same dimensions as the standard 5.8×42mm cartridge, but utilizes a longer streamlined bullet with a heavy steel core for increased performance at extended ranges and penetration. As of 2010 all 5.8×42mm cartridge variants have been succeeded by the DBP10 variant.

The QBZ-03 assault rifle, also known as the Type 03, is a Chinese gas operated, selective-fire assault rifle designed and developed for the 5.8×42mm DBP87 round. 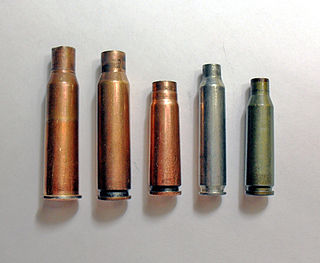 An intermediate cartridge is a rifle/carbine cartridge that has a reduced muzzle energy in comparison to fully powered cartridges but still has much greater power than pistol/personal defense weapon cartridges, and therefore is regarded as being "intermediate" between traditional rifle and handgun calibers. 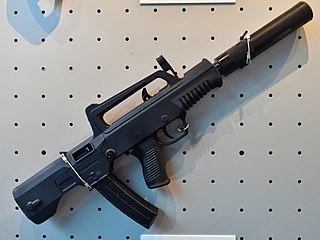 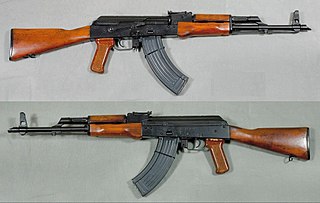 The AKM is a 7.62×39mm assault rifle designed by Mikhail Kalashnikov. It is a common modernised variant of the AK-47 rifle developed in the 1940s.

A Kalashnikov (Калашников) rifle is any one of a series of automatic rifles based on the original design of Mikhail Kalashnikov. They are officially known in Russian as "Avtomát Kaláshnikova", but are widely known as Kalashnikovs, AKs, or in Russian slang, a "Kalash". They were originally manufactured in the Soviet Union, primarily by Kalashnikov Concern, formerly Izhmash, but these rifles and their variants are now manufactured in many other countries.

An assault rifle is a selective-fire rifle that uses an intermediate cartridge and a detachable magazine. Assault rifles were first put into mass production and accepted into widespread service during World War II. The first assault rifle to see major usage was the German StG 44, a development of the earlier Mkb 42. Though other Western nations were slow to accept the assault rifle concept, by the end of the 20th century they had become the standard weapon in most of the world's armies, replacing full-powered rifles and sub-machine guns in most roles. Besides the StG 44, examples of assault rifles include the AK-47 and the M16. 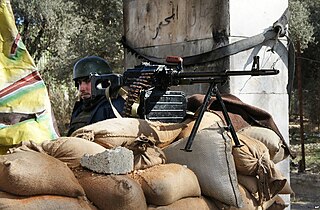 The Type 80 is a general-purpose machine gun manufactured by Norinco in China, based on the Soviet PKM. The machine gun was certified for design finalisation in 1980 and entered the PLA service in the mid-1980s, specifically in 1983. The Type 80 was intended as a successor to the Chinese independently developed Type 67, doing well in tests conducted in the Chengdu Military Region before it was dropped and instead, opted to keep the Type 67 GPMG in use.

The AK-12 is a Russian assault rifle chambered in 5.45×39mm designed and manufactured by the Kalashnikov Concern, making it the fifth generation of Kalashnikov rifles. 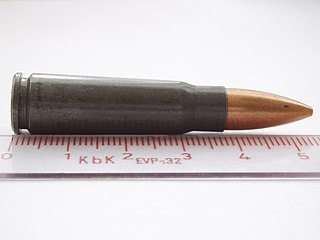 The 7.62×39mm round is a rimless bottlenecked intermediate cartridge of Soviet origin that was designed during World War II. Due to the worldwide proliferation of the Soviet SKS and AK-47 pattern rifles, as well as RPD and RPK light machine guns, the cartridge is used by both militaries and civilians alike.