The Uí Briúin were a royal dynasty of Connacht. Their eponymous apical ancestor was Brión, son of Eochaid Mugmedon and Mongfind, and an elder half brother of Niall of the Nine Hostages. They formed part of the Connachta, along with the Uí Fiachrach and Uí Ailello, putative descendants of Eochaid Mugmedon's sons Fiachra and Ailill. The Uí Ailello were later replaced as the third of the Three Connachta, by genealogical sleight of hand, by the Uí Maine.

Connacht was ruled in early times by the Uí Fiachrach, the Uí Briúin only becoming the dominant force in Connacht in the 7th and 8th centuries.

The Uí Briúin divided into multiple septs, the three major ones being:

The Uí Briúin kings of Connacht were drawn exclusively from these three branches.

According to Tírechán, Saint Patrick visited the "halls of the sons of Brión" at Duma Selchae (located by John O'Donovan in Mag nAí and alternatively by Roderic O'Flaherty near Loch Cime), but does not give their names. An equivalent passage in the Vita Tripartita, possibly of 9th-century origin, names six sons. "A series of later sources dating from the eleventh century onward, meanwhile, enumerates Brion's progeny as no less than twenty-four. No doubt the increasing power of the Uí Briúin was responsible for this dramatic swelling of the ranks, as tribes and dynasties newly coming under Uí Briúin sway were furnished with ancestries that would link them genealogically to their overlords. Into this category fall the Uí Briúin Umaill and likely also the Uí Briúin Ratha and Uí Briúin Sinna." [1]

While Francis Byrne and John O'Donovan believed the dynasty originated in Mag nAí, Roderic O'Flaherty and John Colgan related traditions of Saints Patrick [2] and Felartus [3] visiting the sons of Brión in Maigh Seóla. This confusion surrounding the location of Mag Selce as mentioned in the Tripartite caused Nicholls to suggest that the geographical origin of the Uí Briúin was moved for political reasons to near Cruachan by the time of Tírechán. [4] MacCotter also points out that when the Uí Briúin were purportedly beginning their ascent, given the distributions of surrounding population groups, "the area originally available to Uí Briúin [in Mag nAí] cannot have consisted of more than the area of a few civil parishes", [5] which may lend support to Nicholls' theory.

A story in the Silva Gadelica [6] notes that during the legendary war between Brión and Fiachra, Fiachra's encampment was situated in Aidhne and Brión's lay in Damh-Chluain, which is stated to be in Uí Briúin Seóla and not far from Knockma Hill, west of Tuam. [7] Although this is a legend, it may be an indication of the Uí Briúin's original homeland, as is Aidhne for the Uí Fiachrach. In addition, Hubert Knox, citing the Conmaicne's distribution and early status as subjects of the Uí Briúin, posited that the Uí Briúin originated in the barony of Clare in County Galway as the leading lineage of that people. [8] Intriguingly, the Book of Ballymote calls Cellach mac Rogallaig "King of Conmaicne", [9] a title also commonly taken by members of the Uí Briúin Bréifne branch in later centuries. The Maigh Seóla origin scenario is more consistent with the fact that early Uí Briúin kings (e.g. Cenn Fáelad mac Colgan and Cellach mac Rogallaig) had their residence on Loch Cime, as well as Áed mac Echach's donation of Annaghdown in the 6th century, [10] which Byrne thought unlikely given Annaghdown's distance from Mag nAí. [11] With the inclusion of Máenach mac Báethíne, [12] ancestors of all three major branches of the dynasty are mentioned in the annals as residing or fighting in the Maigh Seóla region in the 7th century. The district to the east of Lough Corrib and the River Corrib is referred to as "Magh Ua mBriuin" at least as late as 1149. [13] This likely denotes the domain of the "king of Uí Briúin", a title borne primarily by men of the Uí Briúin Seóla. [14] As Knox points out, these kings were distinguished at an early date from the Síol Muireadaigh of central Roscommon in the Book of Rights, suggesting that the lands of the Uí Briúin Seóla were the original "Hy Briuin". [15] 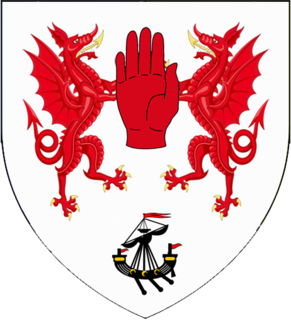 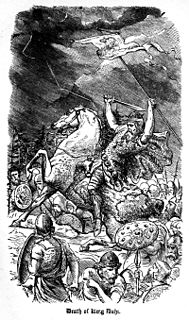 Nath Í, also known as Dathí, son of Fiachrae, son of Eochaid Mugmedon, was a semi-historical Irish king of the 5th century, the father of the likely-historical king Ailill Molt and the ancestor of the Uí Fiachrach dynasties of early medieval Connacht. His mother was Béḃinn. According to legend, he was a High King of Ireland, and died after being struck by lightning while on an expedition to the Alps.

Rogallach mac Uatach was a king of Connacht from the Uí Briúin branch of the Connachta. He was the son of Uatu mac Áedo, a previous king. He married Muireann, the great-great-great-granddaughter of Túathal Máelgarb, High King of Ireland. He acquired the throne of Connacht after defeating the previous king Colmán mac Cobthaig of the Ui Fiachrach Aidhne, who was slain at the Battle of Cennbag in 622. Professor Francis Byrne believes he is the first reasonable representative of this branch to be said to have held the throne of Connacht

Dauí Tenga Uma was a King of Connacht from the Uí Briúin branch of the Connachta.

Áed mac Echach Tirmcharna was a King of Connacht from the Uí Briúin branch of the Connachta. He was the son of Echu Tirmcharna mac Fergusso. He came to the throne in the year 557 and ruled until 575.

Cenn Fáelad mac Colgan was a King of Connacht from the Uí Briúin branch of the Connachta. He was of the branch which developed into the Uí Briúin Seóla, who were centred on Tuam in modern County Galway. He is the first member of this branch mentioned in the annals.

Muiredach Muillethan mac Fergusso was a King of Connacht from the Uí Briúin Aí branch of the Uí Briúin. He was the grandson of Rogallach mac Uatach, a previous king. His sobriquet Muillethan means "broad-crowned".

Forggus mac Cellaig was a King of Connacht from the Uí Briúin branch of the Connachta. He was the son of Cellach mac Rogallaig, a previous king and brother of Domnall mac Cellaig. The sept of Uí Briúin Ai he belonged to was the Síl Cellaig of Loch Cime named for his father. He reigned from 742 to 756.

Diarmait mac Tommaltaig was a king of Connacht from the Uí Briúin branch of the Connachta. He was the great-grandson of Indrechtach mac Muiredaig Muillethan, a previous king. The death of his father Tommaltach mac Murgail is recorded in the annals where he is called king of Mag nAi. He succeeded his brother Muirgius mac Tommaltaig. He was of the Síl Muiredaig sept of the Uí Briúin. He ruled from 815 to 833.

Donn mac Cumasgach was a king of Maigh Seóla who died in 752.