The Uí Ceinnselaig (also Uí Cheinnselaig, Anglicized as Kinsella), from the Old Irish "grandsons of Cennsalach", are an Irish dynasty of Leinster who trace their descent from Énnae Cennsalach, a supposed contemporary of Niall of the Nine Hostages. Énda was said to be a grandson of Bressal Bélach and a first cousin of Dúnlaing mac Énda Niada, eponymous ancestor of the rival Uí Dúnlainge.

The earliest associations of the Uí Ceinnselaig are with the region around Rathvilly, County Carlow, and the headwaters of the River Slaney, but in time the centre of their power was pushed southwards, later being found around Ferns, County Wexford, site of the monastery of the saint Máedóc of Ferns (d. 626 or 632).

Notable kings of the Uí Ceinnselaig and related kindreds included:

Diarmait Mac Murchada, anglicised as Dermot MacMurrough, Dermod MacMurrough, or Dermot MacMorrogh, was a King of Leinster in Ireland. In 1167, he was deposed by the High King of Ireland – Ruaidri Ua Conchobair. The grounds for the deposition were that Mac Murchada had, in 1152, abducted Derbforgaill, the wife of the King of Breifne, Tiernan O'Rourke. To recover his kingdom, Mac Murchada solicited help from King Henry II of England. His issue unresolved, he gained the military support of the Earl of Pembroke. At that time, Strongbow was in opposition to Henry II due to his support for Stephen, King of England against Henry's mother in The Anarchy. In exchange for his aid, Strongbow was promised in marriage to Mac Murchada's daughter Aoife with the right to succeed to the Kingship of Leinster. Henry II then mounted a larger second invasion in 1171 to ensure his control over Strongbow, resulting in the Norman Lordship of Ireland. Mac Murchada was later known as Diarmait na nGall.

Diarmait mac Máel na mBó was King of Leinster, as well as High King of Ireland. He was one of the most important and significant kings in Ireland in the pre-Norman era. His influence extended beyond the island of Ireland into the Hebrides, the Isle of Man, Wales, and even into England. 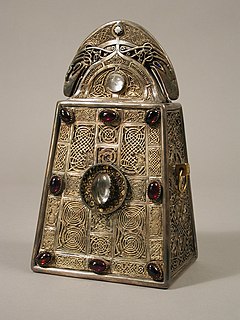 Domhnall Mac Murchada, called Domnall Midi, was High King of Ireland. He belonged to the Clann Cholmáin branch of the Uí Néill. Clann Cholmáin's pre-eminence among the southern Uí Néill, which would last until the rise of Brian Bóruma and the end of the Uí Néill dominance in Ireland, dates from his lifetime.

The Kings of Uisnech were of the Uí Néill and one of its major southern branches, the Clann Cholmáin. The Hill of Uisnech is located in what is now County Westmeath, and was in early historic Ireland considered as the area where all five provinces met.

The Uí Dúnlainge, from the Old Irish "grandsons of Dúnlaing", were an Irish dynasty of Leinster kings who traced their descent from Dúnlaing mac Énda Niada. He was said to be a cousin of Énnae Cennsalach, eponymous ancestor of the rival Uí Chennselaig.

Áed mac Colggen was a king of the Uí Cheinnselaig of Leinster. Some sources incorrectly make him joint king of Leinster with Bran Becc mac Murchado, but it appears that Áed was main ruler of Leinster in 738. His father Colcú mac Bressail was called king of Ard Ladrann at his death obit in the annals in 722 which mention that he was killed. He was the great-great grandson of Crundmáel Erbuilc, a King of Leinster, and was a member of the Sil Chormaic sept.

Donnchad mac Domnaill Remair, also known as Donnchadh mac Domhnall Reamhair, was a late-eleventh-century ruler of the kingdoms of Leinster and Dublin. He was a son of Domnall Remar mac Máel na mBó. Donnchad was slain in 1089.

Diarmait mac Énna meic Murchada was an early twelfth-century ruler of the kingdoms of Leinster and Dublin.

Events from the year 1115 in Ireland.

Domnall mac Murchada, also known as Domnall mac Murchada meic Diarmata, was a leading late eleventh-century claimant to the Kingdom of Leinster, and a King of Dublin. As a son of Murchad mac Diarmata, King of Dublin and the Isles, Domnall was a grandson of Diarmait mac Máel na mBó, King of Leinster, and thus a member of the Uí Chennselaig. Domnall was also the first of the Meic Murchada, a branch of the Uí Chennselaig named after his father.