Last updated June 21, 2020
Not to be confused with O'Neill dynasty.
Gaelic dynasty

The Uí Néill (Irish pronunciation: [iː ˈnʲeːl̠ʲ] , descendants of Niall) are Irish dynasties who claim descent from Niall Noígíallach (Niall of the Nine Hostages), a historical King of Tara who died c. 405.

The founders of the Uí Néill branches are the alleged sons of Niall Noigiallach, seven in all:

All these men were in their lifetime known as members of Connachta dynasty, or as "the sons of Niall." The term Uí Néill did not, by its very nature, come into use until the time of Niall's grandsons and great-grandsons.

Dynasties descended from the Uí Néill, such as the Cenél Conaill and Cenél nEógain, held power in Ulster until their defeat in the Nine Years War in 1603. Many of the heads of the families left for Catholic Europe in 1607, an event known as the Flight of the Earls.

Niall Noígíallach, or in English, Niall of the Nine Hostages, was an Irish king, the ancestor of the Uí Néill dynasties that dominated the northern half of Ireland from the 6th to the 10th century. Irish annalistic and chronicle sources place his reign in the late 4th and early 5th centuries, although modern scholars, through critical study of the annals, date him about half a century later. He is presumed by some to have been a real person, or at the very least semi-historical but most of the information about him that has come down to us is regarded as legendary. Following a 2006 hypothesis by Moore et al. suggesting that his Y chromosomal signature had been discovered, popular science journalists and genetic testing companies began promoting the idea that millions of men alive today have an unbroken descent from Niall. However, more recent dating of the haplotype and corresponding SNP mutation M222 strongly indicates that all men carrying this signature are instead male-line descendants of a single man who lived several thousand years ago, well before the lifetime of Niall, essentially debunking the "Niall hypothesis". If Niall was a real life figure, he may have belonged to this male lineage, but this is not certain. Notably, many O'Neills and McShanes arise from an entirely different lineage. 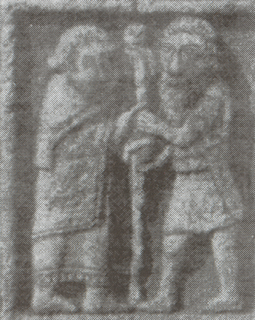 Diarmait mac Cerbaill was King of Tara or High King of Ireland. According to traditions, he was the last High King to follow the pagan rituals of inauguration, the ban-feis or marriage to goddess of the land.

Conall Gulban was an Irish king and eponymous ancestor of the Cenél Conaill, who founded the kingdom of Tír Chonaill in the 5th century, comprising much of what is now County Donegal in Ulster. He was the son of Niall Noígiallach.

Eógan mac Néill was a son of Niall Noígiallach and the eponymous ancestor of the Cenél nEógain branch of the Northern Uí Néill. The Cenel Eoghan would found the over-kingdom of Ailech and later Tír Eoghain, which would span the greater part of Ulster. His burial place is said to be in the Inishowen Peninsula in County Donegal, Ireland which was named after him.

Gallagher is an Irish Gaelic clan based most prominently in what is today County Donegal. The clan name originated in the 10th century as a derivative of its founder Gallchobhair mac Rorcan. They descend in the paternal line from the Northern Uí Néill's Cenél Conaill. The immediate progenitors of the Gallaghers held the High Kingship of Ireland during the 6th and 7th centuries in the form of Ainmuire mac Sétnai, Áed mac Ainmuirech, Máel Coba mac Áedo and Cellach mac Máele Coba; Áed was also an ancestor of the O'Donnell and O'Doherty clans. Indeed, during the Middle Ages, the Gallaghers were Marshals of the Kingdom of Tyrconnell, ruled by their previously junior kinsmen the O'Donnells.

The Southern Uí Néill or Uí Néill Deisceart were that branch of the Uí Néill dynasty that invaded and settled in the Kingdom of Mide and its associated kingdoms.

Conall Cremthainne, also called Conall Err Breg, was an Irish king. He was the son of Niall of the Nine Hostages, and one of the progenitors of the Uí Néill dynasty.

Tír Eoghain, also known as Tyrone, was a kingdom and later earldom of Gaelic Ireland, comprising parts of present-day County Tyrone, County Armagh and County Londonderry. The kingdom represented the core homeland of the Cenél nEógain people of the Northern Uí Néill and although they ruled, there were smaller groups of other Gaels in the area. Also known as the guidance of Land. One part of the realm to the north-east broke away and expanded, becoming Clandeboye, ruled by a scion branch of the Ó Néill.

Coirpre mac Néill, also Cairbre or Cairpre, was said to be a son of Niall of the Nine Hostages. Coirpre was perhaps the leader of the conquests that established the southern Uí Néill in the midlands of Ireland. The record of the Irish annals suggests that Coirpre's successes were reattributed to Muirchertach Macc Ercae. Coirpre is portrayed as an enemy of Saint Patrick in Bishop Tirechán's hagiography and his descendants are said to have been cursed by Patrick so that none would be High King of Ireland. Coirpre is excluded from most lists of High Kings, but included in the earliest.

Suibne Menn was an Irish king who is counted as a High King of Ireland.

Diarmait was a son of Áed Sláine. According to the Irish annals, he was High King of Ireland.

Ardgal mac Conaill was a King of Uisnech in Mide of the Ui Neill dynasty. He was the son of Conall Cremthainne and grandson of Niall Noígíallach. He is considered the third king of Uisnech in the list in the Book of Leinster.

Flaithbertach Ua Néill was king of Ailech, a kingdom of north-west Ireland. He abdicated in 1030 and undertook a pilgrimage to Rome, for which reason he was known as Flaithbertach an Trostáin. Following the death of his son Áed in 1033, Flaithbertach left his retirement and resumed the leadership of the Northern Uí Néill.

Events from the 5th century in Ireland.

Events from the 8th century in Ireland.

The Cenél Conaill, or "kindred of Conall", are a branch of the Northern Uí Néill, who claim descent from Conall Gulban, son of Niall of the Nine Hostages, and allegedly the first Irish nobleman to convert to Christianity. Their kingdom was known as Tír Conaill, with their powerbase at Mag Ithe in the Finn valley, however they gradually expanded to cover what is now counties Donegal and Fermanagh. The Cenél Conaill clashed regularly with their kin the Cenél nEogain, eventually capturing the latters original power-base of Ailech in the Inishowen peninsula—in modern-day County Donegal—by the 12th century.