Unione Sportiva Pistoiese 1921 is an Italian association football club, based in Pistoia, Tuscany. Currently, Pistoiese plays in Serie C. Founded on 21 April 1921, the team plays their home games in the Municipal Stadium of Pistoia named after Marcello Melani.

The singer-songwriter Francesco Guccini is probably the most famous tifoso of Pistoiese in Italy.

Since its inception la societá arancione (Orange Society) founded on April 21, 1921, has been characterized by its European inclinations, being the city historically a crossroads of historical-religious paths to and from the geographical areas of the Old Continent.

It is no coincidence that among the protagonists of the birth of l’Arancione you will find the Hungarians Árpád Hajós and János Nehadoma, with the jersey inspired by that of Holland, which, like the city of Pistoia, boasts a strong floriculture.

In 1927 Pistoiese won their first major honours winning the Arpinati Cup. After winning minor regional championships they were elected to play in the National Division in 1928.

Between 1929 and 1936 they participated in the campionato cadetto finishing first on a couple of occasions. US Pistoiese played their last championship in 1939–40.

Competitive football resumed in 1945 when a group of fans re-founded the team as Pistoiese Sports Union and was admitted to the Serie C. The following were to be characterized by a series of ups and downs between Serie C, Serie D, and the Promozione Championship, with a brief period in Serie B immediately after the Second World War, in which a third-place position was reached.

From 1946 to 1956–57, the team started that fluctuation between the leagues until Vannino Vannucci rose to the presidency in 1956–57 and Pistoiese became a Jewel in the Nile at a cost of 100 million lire.

In the 1958–59 championship, Pistoiese went 21 consecutive games without defeat, in this time amassing 36 points from a possible 42 (2 points for a win) and scoring 45 goals. Most memorable is the match against Empoli, a local rival and competitor for the promotion. The Arancione won 6–0. The final standing that season read 77 goals scored and 24 conceded. After 8 years, they had again reached Serie C.

In the 1960s, the team participated for ten consecutive seasons in Serie C.

Pistoiese achieved prominence by rising to Serie B in the late 1970s with promotion to Serie A following in 1980. Under the presidency of Marcello Melani, who chose veterans like Marcello Lippi and Mario Frustalupi and promising young talents such as Paolo Benedetti, Pistoiese reached Serie A in just 6 years and made a reasonable start, reaching as high as 6th after a win at Fiorentina in Round 13. But a dismal freefall resulted in a last-place finish and relegation. Since 1980, the club has only managed two stretches in Serie B (1995–96 and 1999–2002). Melani left his post in 1980, followed by Lippi in 1981.

In the 2005–06 Serie C1/B campaign, Pistoiese battled against relegation from Serie C1 with goals proving hard to come by, yet having one of the best defensive records in the division. A good end to the season brought the team to a 9th-place finish in Group A, which was three points ahead of the relegation playoff. Pistoiese finished 14th in Group B in the 2007–08 season and competed in a relegation play-off against Sangiovannese. They won by 4–0 aggregate and remained in Lega Pro Prima Divisione (former Serie C1).

The Tuscan club started the 2008–09 season with Roberto Miggiano as head coach, but disappointing results and a last-place position in the Lega Pro Prima Divisione table led the club to replace him with Salvatore Polverino later in October. However, results did not improve under new boss Polverino, prompting him to tender his resignation in February 2009. He was replaced by former Juventus star Moreno Torricelli, in his first stint as a professional head coach; under Torricelli's reign, Pistoiese managed to improve results and escape immediate relegation ending in 16th place. Nevertheless, Pistoiese lost a play-off against Foligno and was relegated to Lega Pro Seconda Divisione.

In the summer of 2009, Pistoiese was not permitted enrollment in Lega Pro Seconda Divisione due to inadequate finances.

On 13 August 2009 Unione Sportiva Pistoiese 1921 was created by Pistoia's mayor, Berti. The club was admitted to Tuscany's Eccellenza league and managed an excellent inaugural year, reaching the play-off for promotion, where it eventually lost to Mosciano.

In the 2010–11 season, it won Eccellenza Tuscany group A and was thus promoted to Serie D. Pistoiese managed to reacquire professional status after winning the Girone E of 2013–14 Serie D, thus ensuring a spot in the 2014–15 Lega Pro.

The team's colors are orange and blue.

U.S. Catanzaro 1929 is an Italian football club based in Catanzaro, Calabria.

Unione Sportiva Triestina Calcio 1918, commonly referred to as Triestina, is an Italian football club based in Trieste, Friuli-Venezia Giulia. Originally founded in 1918, the club folded and was re-established several times in its history. As of the 2019–20 season, it plays in Serie C, the third tier of Italian football. 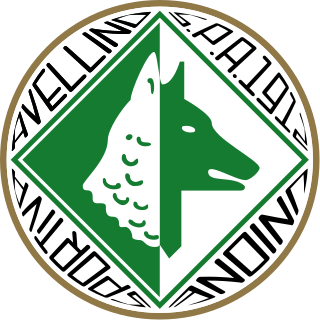 Unione Sportiva Avellino 1912, commonly known as US Avellino, is an Italian professional football club based in Avellino, Campania, that competes in the Serie C, the third tier of Italian football.

Ravenna Football Club is an Italian association football club, based in Ravenna, Emilia-Romagna. It currently plays in Serie C after achieving promotion as Group D champions in the 2016-17 Serie D season.

Unione Sportiva Grosseto 1912 is an Italian association football club, based in the city of Grosseto, Tuscany. The club was founded in 1912 as Unione Ginnico Sportiva Grossetana. The team's most associated nickname is grifone, after its logo, depicting a griffon. Its colours are red and white, and it currently plays in Serie C, the third level of Italian football.

Associazione Calcio Cuneo 1905 is an defunct Italian football club, based in Cuneo, Piedmont. At the end of the 2018–19 season it was relegated from Serie C and did not register for Serie D for 2019–20.

Associazione Sportiva Dilettantistica Portogruaro is an Italian association football club, based in Portogruaro, Veneto. Currently it plays in Eccellenza Veneto.

Trapani Calcio, commonly referred to as Trapani, is an Italian football club based in Trapani, Sicily. It currently plays in no football league, after being excluded from Serie C during the course of the 2020–21 season. 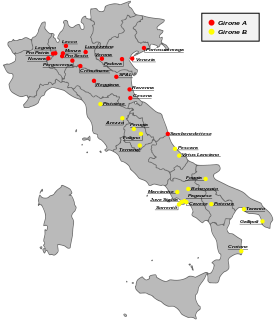 The 2008–09 Lega Pro Prima Divisione season is the thirty-first since its renaming to Serie C1 in 1978, and the first edition since the renaming from Serie C1 to Lega Pro. It was divided into two phases: the regular season, played from September 2008 to May 2009, and the playoff phase from May to June 2009.

Lucchese 1905 s.r.l., or simply Lucchese, is an Italian football club, based in Lucca, Tuscany that plays in Serie D, the fourth tier of Italian football. The club was first founded in 1905, having last been in Serie A in 1952.

Unione Sportiva Salernitana 1919, commonly referred to as Salernitana, is an Italian football club based in Salerno, Campania. Salernitana returned to Serie A in 2021, after a break of 23 seasons, having finished second in Serie B. Previously in 2015 "I Granata" were promoted to Serie B, having finished first in Lega Pro Prima Divisione - Girone C. The club is the legitimate heir of the former Salernitana Calcio 1919 and there is a sports continuity also with the former Salerno Calcio in the 2011–12 season which restarted from Serie D rather than from Terza Categoria due to Article 52 NOIF of FIGC.