It is a 14-times national champion. USK Praha became the first and so far the only men's basketball club in Czech Republic, as well as former Czechoslovakia, to win one of the European cup competitions, the FIBA Cup Winners' Cup in 1969.

The club won the 2nd tier FIBA European Cup Winners' Cup in the 1968–69 season, only a year after losing the same title in the final game of the 1967–68 season against AEK. Slavia also reached the FIBA European Champions Cup Final during the 1965–66 season, where they lost to Simmenthal Milano.

- Set a club record or won an individual award as a professional player. - Played at least one official international match for his senior national team at any time.

Pallacanestro Olimpia Milano, commonly known as Olimpia Milano or as AX Armani Exchange Olimpia Milan after its title sponsor, is an LBA Italian professional basketball team, based in Milan, Italy. Its colors are white and red, and the team is sometimes referred as "Scarpette Rosse" because team officials imported red Converse All-Star shoes for players from the United States. The tag line stuck, and the nickname is still used by many fans today.

Košarkarski klub Olimpija was a men's professional basketball club based in Ljubljana, Slovenia.

Košarkaški klub Zadar, commonly referred to as KK Zadar or simply Zadar, is a men's professional basketball club based in Zadar, Croatia. The club is a founding member and shareholder of the Adriatic Basketball Association, and competes in the ABA League and the Croatian League.

Real Madrid Baloncesto is a Spanish professional basketball team that was founded in 1931, as a division of the Real Madrid CF multi sports club. They play domestically in the Liga ACB, and internationally in the EuroLeague.

Pallacanestro Varese, also called by its current sponsor's name, the Openjobmetis Varese, is an Italian professional basketball club based in Varese, Lombardy. Founded in 1945, the team plays in the Italian first division LBA.

Club Joventut de Badalona, S.A.D. is a Spanish professional basketball club based in Badalona, Catalonia, Spain, playing in the Liga ACB and the EuroCup. Known to their fans as La Penya, it is one of only three teams that have never been relegated from the top division of the Spanish League. The only other two are Real Madrid and Estudiantes. In 1994, Joventut de Badalona was the champion of the FIBA European Champions' Cup, the first Catalan basketball club to accomplish such a grandiose achievement and the first Spanish team to do so in the Final Four format.

BC Dinamo Tbilisi is a professional basketball club that is based in Tbilisi, that plays in the Georgian Superliga. It is one of the oldest and most successful basketball clubs of Georgia and the former USSR, having won numerous national titles and the 1962 FIBA European Champions Cup (EuroLeague). The club's traditional colors are blue and white. 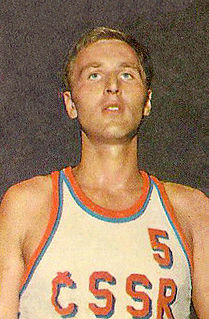 Jiří Zídek Sr. is a Czech retired professional basketball player and coach. At 6'9" tall, Zídek was a talented center, and is considered by many to arguably be the best Czech basketball player ever. He was named the Best Czech Player of the 20th Century. He was also among the 105 player nominee list for the 50 Greatest EuroLeague Contributors list. His son, Jiří "George" Zídek Jr., also won the EuroLeague title with Žalgiris, in 1999. To this day, they are the only father and son to have reached a EuroLeague title game as players. He was inducted into the FIBA Hall of Fame in 2019.

Miloslav Kříž was a Czech professional basketball player and coach. As a player, he played first for Uncas Prague, and later for Sparta Prague, but he was better known as a head coach and trainer, especially as the head coach of the senior Czechoslovakian women's national team. He was awarded the FIBA Order of Merit, for his services to basketball, in 2002.

Sparta Praha is among the oldest and most popular sports clubs in the country, with a number of fans not only in Prague but throughout the whole of the Czech Republic. The foundation of the club dates back to 1893. Club colours are red, yellow and blue.

USK Praha is a Czech women's basketball club that was founded in 1953 in the city of Prague. USK Praha plays in the Czech League, the highest competition in the Czech Republic. It is a 21-times national champion. On the international scene, the greatest success was the win of the Ronchetti Cup in the 1975/76 season, of the EuroLeague in the 2014/15 season and subsequently of the FIBA SuperCup in 2015. 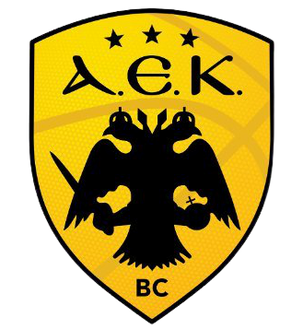