USS Laboon (DDG-58) is an Arleigh Burke-class destroyer in the United States Navy. She is named for Father John Francis Laboon (1921–1988), a captain in the Chaplain Corps of the United States Navy, who was awarded the Silver Star during World War II while serving on the submarine USS Peto.

Laboon's keel was laid down on 23 March 1992 at the Bath Iron Works shipyard in Bath, Maine. She was launched on 20 February 1993. Laboon was commissioned on 18 March 1995, commanded by CDR Douglas D. McDonald. In the fall of 1996, she fired Tomahawk missiles at targets in Iraq, thus becoming the first Arleigh Burke-class destroyer to engage in combat.

On 12 September 2012, Laboon was ordered to the coast of Libya in what the Pentagon called a "contingency" in case a strike was ordered. This was in response to the 2012 diplomatic missions attacks. [1]

On 21 June 2015, Laboon entered the Black Sea along with the French ship Dupuy de Lôme as part of NATO's presence missions following the Annexation of Crimea by the Russian Federation. [2] While in the Black Sea, Laboon participated in joint maneuvers with a Romanian Navy Rear-Admiral Eustațiu Sebastian-class corvette for two days beginning on 22 June 2015.[ citation needed ] On 27 June 2015, Laboon began a two-day visit to the Black Sea port of Batumi, Georgia to participate in training with the Coast Guard of Georgia and offer tours of the ship. [3]

On 14 April 2018, she fired seven Tomahawk missiles from a position in the Red Sea as part of a bombing campaign in retaliation for the Syrian government's use of chemical weapons against people in Douma. [4] 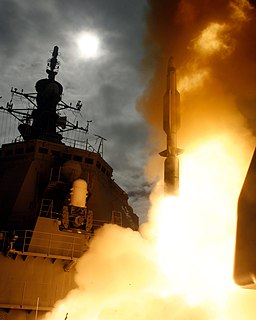 A guided-missile destroyer is designed to launch anti-aircraft guided missiles. Many are also equipped to carry out anti-submarine, anti-air, and anti-surface operations. The NATO standard designation for these vessels is DDG. Nations vary in their use of destroyer D designation in their hull pennant numbering, either prefixing or dropping it altogether. The U.S. Navy has adopted the classification DDG in the American hull classification system. 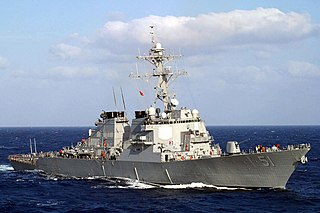 USS Arleigh Burke (DDG-51), named for Admiral Arleigh A. Burke, USN (1901–1996), is the lead ship of the Arleigh Burke-class guided missile destroyers. She was laid down by the Bath Iron Works company at Bath, Maine, on 6 December 1988, and launched on 16 September 1989 by Mrs. Roberta (Gorsuch) Burke. The Admiral was present in person at her commissioning ceremony on 4 July 1991, which was held on the waterfront in downtown Norfolk, Virginia.

The Spruance-class destroyer was developed by the United States to replace the many World War II–built Allen M. Sumner- and Gearing-class destroyers and was the primary destroyer built for the U.S. Navy during the 1970s and 1980s.

USS Barry (DDG-52) is an Arleigh Burke-class guided missile destroyer, commissioned in 1992. Barry is the fourth United States Navy ship named after the "Father of the American Navy", Commodore John Barry (1745–1803). Her homeport is Naval Station Yokosuka, Japan. Several improvements over Arleigh Burke exist on this ship and all following Arleigh Burke-class destroyers. They include the ability to refuel a helicopter and several other small improvements. 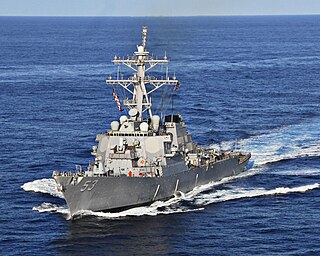 USS John Paul Jones (DDG-53) is the third Arleigh Burke-class guided missile destroyer and the first ship of the class homeported on the west coast. She is named after American Revolutionary War naval captain John Paul Jones and the second ship to be so named. She was built at Bath Iron Works in Bath, Maine. The ship is currently part of Destroyer Squadron 23, and administratively reports to Commander, Naval Surface Forces Pacific.

USS Stout (DDG-55) is the fifth Arleigh Burke-class guided missile destroyer. Built by Ingalls Shipbuilding, she was commissioned on 13 August 1994 and she is currently home-ported in Naval Station Norfolk. She is part of Destroyer Squadron 26. Stout is named for Rear Admiral Herald F. Stout (1903–1987), who distinguished himself as the Commanding Officer of the destroyer USS Claxton during World War II. In November 1943, Commander Stout received two Navy Crosses in the span of three weeks for his actions in the Pacific. Stout aided Destroyer Squadron 23 in sinking five heavily armed Japanese warships and damaging four others during the Solomon Islands campaign as well as sinking four more Japanese warships and damaging two others to establish a beachhead on Bougainville Island. The ship was ordered from Ingalls Shipbuilding on 13 December 1988. The keel was laid down on 8 August 1991 and the vessel was launched on 16 October 1992. Stout was commissioned on 13 August 1994. As of July 2020 the ship is part of Destroyer Squadron 26 based out of Naval Station Norfolk. 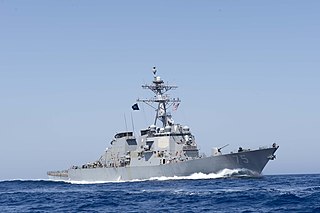 USS Donald Cook (DDG-75) is an Arleigh Burke-class guided missile destroyer in the United States Navy named for Medal of Honor recipient Donald Cook, a Colonel in the United States Marine Corps. This ship is the 25th destroyer of her class and the 14th of the class to be built at Bath Iron Works in Bath, Maine. Construction began on 9 July 1996, she was launched and christened on 3 May 1997, and on 4 December 1998 she was commissioned at Penn's Landing Pier in Philadelphia, Pennsylvania.

USS Ross (DDG-71) is an Arleigh Burke-class guided-missile destroyer in the United States Navy. She is the second Navy ship to be named Ross, the first Navy ship named for Medal of Honor recipient Donald K. Ross and the 21st destroyer of her class. The first Ross, DD-563, was named for David Ross, a captain in the Continental Navy.

USS Mahan (DDG-72) is an Arleigh Burke-class destroyer currently in service with the United States Navy. This ship is the 22nd destroyer of her class. USS Mahan was the 12th ship of this class to be built at Bath Iron Works in Bath, Maine, and construction began on 17 August 1995. She was launched and christened on 29 June 1996. On 14 February 1998 she was commissioned in Tampa, Florida. Mahan is homeported in Norfolk, Virginia, and as of 2012 was attached to Destroyer Squadron 2. By 2016, the ship was part of Destroyer Squadron 22.

USS McFaul (DDG-74) is an Arleigh Burke-class destroyer in the United States Navy. She is named for U.S. Navy SEAL Chief Petty Officer Donald L. McFaul. This ship is the 24th destroyer of her class. USS McFaul was the 11th ship of this class to be built at Ingalls Shipbuilding in Pascagoula, Mississippi, and construction began on 26 January 1996. She was launched on 18 January 1997 and was christened on 12 April 1997. On 25 April 1998 she had her commissioning ceremony at the Garden City Terminal in Savannah, Georgia. As of July 2020 the ship is part of Destroyer Squadron 26 based out of Naval Station Norfolk.

USS Bainbridge (DDG-96) is an Arleigh Burke-class guided missile destroyer in the United States Navy. She is the fifth ship to carry that name, and the 46th destroyer of a planned 75-ship class. Bainbridge is named in honor of Commodore William Bainbridge, who as commander of the frigate USS Constitution distinguished himself in the War of 1812 when he and his crew captured HMS Java, a 38-gun fifth-rate frigate of the Royal Navy. 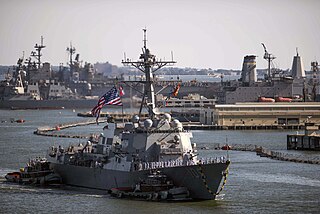 USS Spruance (DDG-111) is a United States Navy Arleigh Burke-class destroyer. She is the 61st ship in her class. Spruance is the second ship to be named for Admiral Raymond A. Spruance (1886–1969), who commanded American naval forces at the Battles of Midway and the Philippine Sea. He was later Ambassador to the Philippines. Her keel was laid down on 14 May 2009. She was christened by the admiral's granddaughter, Ellen Spruance Holscher, on 5 June 2010 in Bath, Maine at Bath Iron Works, where the ship was built at a cost of $1 billion. The completed ship left Bath on 1 September 2011 for her commissioning in Key West, Florida on 1 October 2011. 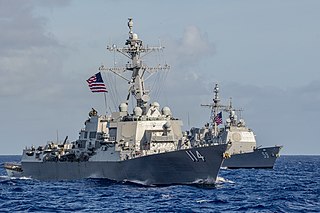 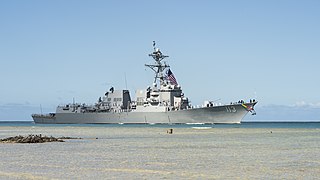 USS John Finn (DDG-113) is an Arleigh Burke-class destroyer. The contract to build her was awarded to Ingalls Shipbuilding of Pascagoula, Mississippi, on 15 June 2011. Ingalls has been a subsidiary of Huntington Ingalls Industries since its acquisition in April 2001. Prior to the award, Ingalls had constructed 28 Arleigh Burke-class destroyers, the last one of which was USS William P. Lawrence. On 15 February 2011, Secretary of the Navy Ray Mabus announced the ship's name to be John Finn after John William Finn; the names of four other ships were also disclosed. 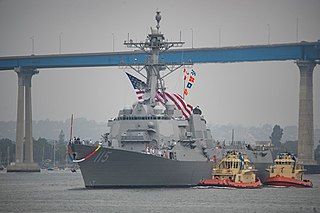 USS Rafael Peralta (DDG-115) is the 65th ship of its class and an Arleigh Burke-class destroyer. The destroyer can operate with a Carrier Strike Group (CSG), Expeditionary Strike Group (ESG), as an element of a Surface Action Group (SAG), or independently. The ship can conduct a variety of missions in support of national military strategy. From peacetime presence and crisis management to sea control and power projection, 115 will be capable of carrying out Integrated Air and Missile Defense (IAMD), Undersea Warfare (USW), Surface Warfare (SW), and Strike Warfare STW in multi-threat environments. 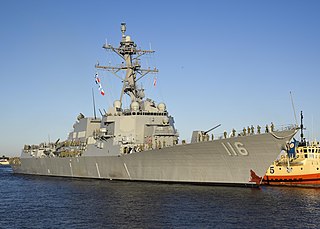 USS Thomas Hudner (DDG-116) is an Arleigh Burke-class destroyer. The $663 million contract to build her was awarded on 28 February 2012 to Bath Iron Works of Bath, Maine. On 7 May 2012, Secretary of the Navy Ray Mabus announced the ship name would be Thomas Hudner in honor of U.S. naval aviator Thomas Hudner, who was awarded the Medal of Honor for his actions in trying to save the life of his wingman, Ensign Jesse L. Brown, during the Battle of Chosin Reservoir in the Korean War.