USS Lejeune (AP-74) [3] was a German cargo liner that was converted to a US Navy troop transport during the Second World War. Her original name was TS (Turbine Ship) Windhuk.

Windhuk was built at the Blohm & Voss shipyard in Hamburg, Germany and completed in 1937. She was one of a pair of sister ships completed that year for Deutsche Ost-Afrika Linie, the other being TS Pretoria.

In peacetime Deutsche Ost-Afrika Linie operated Windhuk mainly between Hamburg, South-West Africa and South Africa. Reports that she operated as a German raider in the Second World War are said to be false. [4] (Her sister ship, SS Pretoria, later served as a German hospital ship during the closing stages of the War.)

After the outbreak of the Second World War in September 1939, the Windhuk risked being trapped in Cape Town and sought a means for passage back to Germany. The first leg of her northbound voyage would take her to Lobito, Angola, from there to Buenos Aires as a preferred destination. However this was not possible due to the actions of the pocket battleship Graf Spee. Instead after two months at sea, evading the Royal Navy, the Windhuk set course for Santos, São Paulo, Brazil. To enter the port on December 7th 1939 the crew had renamed the vessel the Santos Maru, repainting the ship at sea and flew a hand-crafted Japanese flag. Once dockside the German flag was raised and the borrowed name painted out. [5]

The Associated Press reported that on 15 January 1942 the German consul at Santos, Brazil, turned over the Windhuk to the Brazilian government. [6]

Windhuk was still in Santos on 22 August 1942 when Brazil broke ties with Germany and interned the ship. When her crew learned that she was to be interned, they sabotaged most of her machinery. They poured concrete into the main turbine engines. They drained the boilers of water and then lit the furnaces, which melted the boilers beyond repair. They cut her main shafts and bearings with high temperature metal cutting torches. They damaged all electric generators, refrigeration equipment, steering gear, small motors, etc. beyond repair. However, they made no attempt to scuttle the ship. [7]

Windhuk remained in Santos until January 1943 when she was towed to Rio de Janeiro for repairs.

In 1942 the US Government bought Windhuk from Brazil and sent two hundred US Navy personnel to Brazil to fit her with a new diesel engine. The work was not completed until March 1943, when she made a thirty-day voyage to Norfolk, Virginia for further work and conversion to a troopship.

When she arrived in Norfolk, she had been stripped of most of her elegant furnishings such as mahogany and teak wood paneling. She was refitted as a troop transport, which took about a year to rectify all the sabotage by the German crew. [7] While at Norfolk she was named USS Lejeune (AP-74), after USMC General John Archer Lejeune.

Lejeune was fully commissioned in April or May 1944. On 11 June 1944, she began her wartime service in her new role as a US Navy troop transport with a voyage from Norfolk to Glasgow, Scotland, with 4,460 soldiers aboard. Her troop capacity would later be increased to 4,650. Beginning on 12 July, she then made a trip from New York to Glasgow, with 207 officers and 4,307 Navy personnel. In December, she made an Atlantic crossing with elements of the 69th Infantry Division, which was destined to meet Soviet troops on the banks of the Elbe River deep within Germany five months later, in April 1945.

Lejeune made a total of ten round-trip transatlantic crossings before the end of the war, and a further nine crossings were made to the United Kingdom, France or Africa in the months immediately after, until she returned to Norfolk 9 May 1946 for overhaul.

On 28 September 1946 Lejeune resumed service. From 19 October 1946 to 1 August 1947, she made a total of four trips to the Pacific, from San Francisco to Shanghai and Tsingtao, China, and to Yokosuka, Japan. She then sailed back to New York City, reaching her destination 29 August, and from there returned to San Francisco 25 September.

USS Lejeune departed San Francisco for Bremerton, Washington on 2 October 1947, where she was decommissioned 9 February 1948 and placed in the Pacific Reserve Fleet at Tacoma, Washington. She was struck from the Naval Vessel Register in July 1957 and scrapped at Portland, Oregon 16 August 1966. Her ship's bell however was preserved, and in 1971 it was mounted on the flagstaff at Marine Base HQ Camp Lejeune.

During her US Navy career Lejeune transported more than 100,000 troops.

During internment in Brazil, the crew was interned (in stables converted into internment camps) in small towns far inland. [8] They were used as a workforce, and during times off were able to play soccer and perform musical presentations.

Many married Brazilian women and decided to stay in Brazil, which has had a significant German minority since early in the 19th century. After the war, some of the remaining crew members, especially older ones, returned to Germany. One group of former crew who stayed in Brazil after the war opened a restaurant in São Paulo named after the ship, serving dishes from her former passenger menus. [9] 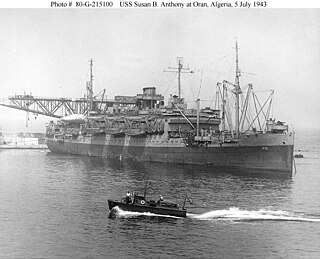 USS Susan B. Anthony (AP-72) was a turbo-electric ocean liner, Santa Clara, of the Grace Steamship Company that was built in 1930. Santa Clara was turned over to the War Shipping Administration (WSA) on 28 February 1942 and operated by Grace Lines as agent for WSA as a troop ship making voyages to the South Pacific. The ship was chartered to the Navy on 7 August 1942 for operation as a United States Navy transport ship. The ship was sunk 7 June 1944 off Normandy by a mine while cruising through a swept channel with all 2,689 people aboard being saved.

USS Admiral W. L. Capps (AP-121), an Admiral W. S. Benson-class transport, was the second ship of the United States Navy to be named for Rear Admiral Washington L. Capps (1864–1935). Unusually, the first — USS Capps (DD-550) — served concurrently with the Admiral W. L. Capps. Via a transfer to the United States Army and then back to the Navy, the ship was renamed USNS General Hugh J. Gaffey (T-AP-121), making her the only ship to be named for Hugh Joseph Gaffey.

USS Barnwell (APA-132/LPA-132) was a Haskell-class attack transport of the US Navy. She was built and used during World War II. She was of the VC2-S-AP5 Victory ship design type. Barnwell was named for Barnwell County, South Carolina.

The SS Conte Grande was a Lloyd Sabaudo Line ocean liner built in 1927 by Stabilimento Tecnico Triestino in Trieste, Italy, to service the transatlantic passenger line between Genoa, Italy, and New York City. Launched on 29 June 1927, her maiden voyage was from Genoa to Naples to New York City, which occurred on 13 April 1928. In 1932, after acquisition by the Italian Line, she was transferred to the South America service but was laid up in Santos, Brazil in 1940.

USS Hancock (AP-3) was a transport ship in the United States Navy. Acquired by the Navy in 1902, she participated in World War I and a number of US military and diplomatic ventures prior to that.

USS Thomas Jefferson (APA-30), serving from 1 May 1942 until 18 July 1955, was a transport and then reclassified on 1 February 1943 as an President Jackson-class attack transport. She was laid down under Maritime Commission contract as President Garfield on 5 February 1940 at Newport News, Virginia, by the Newport News Shipbuilding & Drydock Company for the American President Lines. The ship was launched on 20 November 1940, sponsored by Miss Eugenia Merrill. President Garfield was completed 26 March 1941 and acquired by the War Shipping Administration (WSA) 29 November 1941 with American President Lines, the WSA agent, operating the ship as a troop transport. On 1 May 1942 the United States Navy purchased the ship and commissioned her USS Thomas Jefferson on 31 August 1942, Commander Chauncey R. Crutcher in command.

USS Kittery (AK-2) was a German passenger liner of the Hamburg America Line that was built in 1905 as D/S Präsident. The United States Navy took her over in 1918, renamed and commissioned her as a troopship and military cargo transport in World War I. She was transferred to the United States Shipping Board in 1933 and scrapped in 1937.

USS General J. R. Brooke (AP-132) was a General G. O. Squier-class transport ship for the U.S. Navy in World War II. She was named in honor of U.S. Army general John Rutter Brooke. Decommissioned in 1946, she was sold privately in 1964 and renamed SS Marymar, and was scrapped in 1979.

SS President Roosevelt was an ocean liner in service in the 1920s and 1930s. Originally built as a Harris-class attack transport towards the end of World War I, she entered commercial service after her completion. Having been built as Peninsula State, she was soon renamed President Pierce and then President Roosevelt. Requisitioned for service as a troopship with the US Navy during World War II, she was renamed USS Joseph T. Dickman (APA-13) and served in the Atlantic and Pacific theaters, being scrapped postwar in 1948.

USS General A. E. Anderson (AP-111) was a troop transport that served with the United States Navy in World War II and the Korean War. 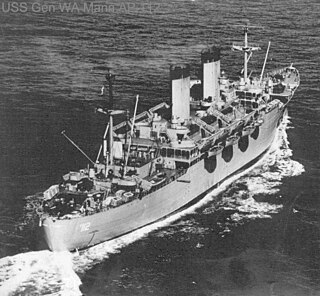 USS General W. A. Mann (AP-112) was a troop transport that served with the United States Navy in World War II, the Korean War and the Vietnam War.

USS General H. W. Butner (AP-113), named for Henry W. Butner, was a troopship that served with the United States Navy in World War II and the Korean War. She was redesignated T-AP-113 in October 1949. 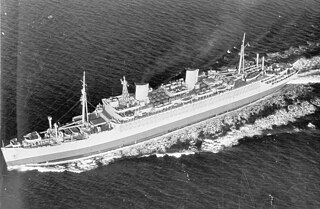 USS Wakefield (AP-21) was a troop transport that served with the US Navy during World War II. Before her war service, she was the luxury ocean liner SS Manhattan.

USS Mount Vernon (AP-22) was a troop transport that served with the United States Navy during World War II. Prior to her military service, she was a luxury ocean liner named SS Washington.

USS Thurston (AP-77) was a troop transport that served with the United States Navy during World War II. She was named after counties in Nebraska and Washington.

USS George F. Elliott (AP-105) was a cargo liner built for the Mississippi Shipping Company as SS Delbrasil for operation between New Orleans and the east coast of South America in 1939 by its operator, Delta Line. The ship entered that service and operated until taken over by the War Shipping Administration (WSA) on 28 April 1942 for operation by Delta Line acting as WSA's agent. On 25 August 1943 WSA allocated the ship to the Navy for conversion to a troop transport commissioned and operated by the Navy for the duration of the war. Ownership of the ship was transferred from Mississippi Shipping to WSA on 4 February 1944 while under Navy operation and was retained until sale to American South African Lines on 22 December 1948. The ship was renamed African Endeavor until returned as a trade in to the Maritime Commission on 22 September 1960 for layup in the James River reserve fleet and later sold to Boston Metals for scrapping.

USS Admiral E. W. Eberle (AP-123) was laid down on 15 February 1943 under a Maritime Commission contract by the Bethlehem Shipbuilding Corporation, Alameda, California; launched on 14 June 1944; sponsored by Mrs. Earl Warren, the wife of the Governor of California who later became Chief Justice of the United States Supreme Court; and acquired by the Navy and commissioned on 24 January 1945, Capt. G. C. Carlstedt, USCG, in command.