USS Plainview (AGEH–1) was, in its time, the world's largest hydrofoil. [1] Named for the cities of Plainview, New York and Plainview, Texas. [2] She was also the United States Navy's first hydrofoil research ship. Plainview was designed under project SCB 219; [3] laid down 8 May 1964 by the Lockheed Shipbuilding and Construction Company, Seattle, Washington; launched 28 June 1965; sponsored by Mrs. John T. Hayward; and placed in service on 3 March 1969. She cost $21 million to construct. [1]

Propulsion consisted of two General Electric LM1500 free-turbine turboshaft engines, derivatives of the J79 turbojets used in the F-4 Phantom aircraft, but during conventional operations she was driven by two diesel engines. Her homeport was Bremerton, Washington. Plainview carried out long range experimental programs to evaluate the design principles of hydrofoils and to develop and evaluate tactics and doctrine for hydrofoils, particularly in anti-submarine warfare, and helped to determine the feasibility of hydrofoil operations in high seas.

Plainview traveled on her foils for a total of 268 hours, over her entire lifetime. [2]

The Balao-class was a successful design of United States Navy submarine used during World War II, and with 120 boats completed, the largest class of submarines in the United States Navy. An improvement on the earlier Gato class, the boats had slight internal differences. The most significant improvement was the use of thicker, higher yield strength steel in the pressure hull skins and frames, which increased their test depth to 400 feet (120 m). Tang actually achieved a depth of 612 ft (187 m) during a test dive, and exceeded that test depth when taking on water in the forward torpedo room while evading a destroyer. 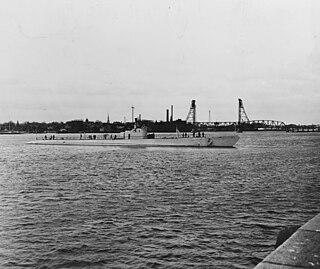 USS Cachalot (SC-4/SS-170), the lead ship of her class and one of the "V-boats", was the only ship of the United States Navy to be named for the sperm whale. Her keel was laid down by the Portsmouth Navy Yard. She was launched on 19 October 1933 as V-8 (SC-4) sponsored by Miss K. D. Kempff, and commissioned on 1 December 1933 with Lieutenant Commander Merril Comstock in command. Cachalot was the first submarine to have the Torpedo Data Computer, Arma Corporation's Mark 1, installed. 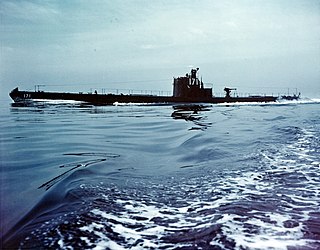 USS Cuttlefish (SC-5/SS-171), a Cachalot-class submarine and one of the "V-boats," was the second ship of the United States Navy to be named for the cuttlefish. Her keel was laid down by Electric Boat Company in Groton, Connecticut. She was launched on 21 November 1933 sponsored by Mrs. B. S. Bullard, and commissioned on 8 June 1934, Lieutenant Commander Charles W. "Gin" Styer in command. Cuttlefish was the first submarine built entirely at Electric Boat's facility in Groton, Connecticut; construction of previous Electric Boat designs had been subcontracted to other shipyards, notably Fore River Shipbuilding of Quincy, Massachusetts. Four Peruvian R-class submarines had previously been finished in Groton, using material from cancelled S-boats salvaged from Fore River.

The Pegasus-class hydrofoils were a series of fast attack patrol boats employed by the U.S. Navy. They were in service from 1977 through 1993. These hydrofoils carried the designation "PHM" for "Patrol, Hydrofoil, Missile." The Pegasus-class vessels were originally intended for NATO operations in the North Sea and Baltic Sea. Subsequently, participation by other NATO navies, including Germany and Italy, ceased and the U.S. Navy proceeded to procure six PHMs, which were highly successful in conducting coastal operations, such as narcotics interdiction and coastal patrol, in the Caribbean basin.

USS Cusk (SS/SSG/AGSS-348), a Balao-class submarine, was a ship of the United States Navy named for the cusk, a large food fish related to the cod.

USS Sablefish (SS/AGSS-303), a Balao-class submarine, was a ship of the United States Navy named for the sablefish, a large, dark fish found along North America's Pacific coast from California to Alaska.

The second USS Menhaden (SS-377) was United States Navy Balao-class submarine. Launched in 1944, she operated out of Pearl Harbor until 1946, then continued in use out of various ports in the Pacific until the 1970s. She was then decommissioned and re-fitted as a remotely controlled, unmanned acoustic test vehicle known as the "Yellow Submarine", until she was scrapped in 1988. 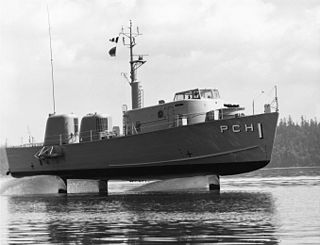 USS High Point (PCH-1) was a High Point-class patrol craft of the United States Navy. She was designed beginning in April 1958 under project SCB 202, and was launched 17 August 1962 by J.M. Martinac Shipbuilding Corp. in Tacoma, Washington as a sub-contractor to Boeing in Seattle, Washington at a cost of $2.08 million, together with Vickers, Inc. Marine and Ordnance Department in Waterbury, Connecticut, which provided hydraulic components and controls. Electronic equipment aboard, including automatic stabilization equipment, dead reckoning navigation system, was developed and manufactured by the United Aircraft Corp. Hamilton Standard Division. 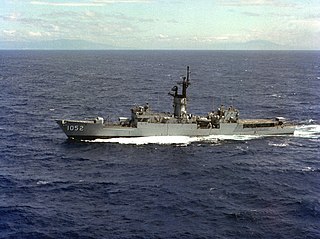 USS Knox (DE/FF-1052) was the lead ship of her class of destroyer escorts in the United States Navy. Knox was named for Commodore Dudley Wright Knox, and was the second US Navy ship named Knox. In 1975, she was redesignated a frigate. She served from 1969 to 1992, and was sunk as a target in 2007. 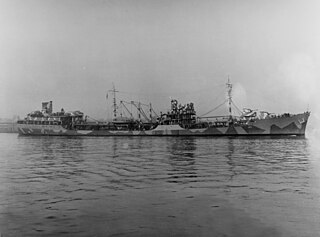 The Tucumcari (PGH-2) was a Boeing-built hydrofoil. Named after Tucumcari, New Mexico, it was the basis for the technology used in the subsequent Pegasus-class patrol boats and the Jetfoil ferries. Its unique feature was a waterjet propulsion and a computer-controlled fully submerged foil configuration of one foil at the bow and foils on the port and starboard sides. The Tucumcari was one of two prototype boats contracted by the Navy under project SCB 252 for the purpose of evaluating the latest hydrofoil technology. The second boat was the rival Grumman built USS Flagstaff (PGH-1).

USS Flagstaff (PGH-1) was the only Flagstaff-class patrol gunboat (hydrofoil) and was acquired by the United States Navy because of her relatively low cost and very high speed. She was later loaned by the Navy to the U.S. Coast Guard, as USCGC Flagstaff (WPBH-1). The Coast Guard’s interest in the craft was the craft’s speed and its ability to interdict smugglers and other suspicious craft approaching the U.S. coast.

USS Koiner (DE-331) was an Edsall-class destroyer escort built for the U.S. Navy during World War II. She served in the Atlantic Ocean and the Pacific Ocean and provided destroyer escort protection against submarine and air attack for Navy vessels and convoys. Post-war, she was loaned to the U.S. Coast Guard, and also reclassified as a radar picket ship.

The second USS Grand Rapids (PGM-98/PG-98) was an Asheville-class gunboat in the United States Navy during the Vietnam War.

HMS Sarawak (K591) was a Colony-class frigate of the United Kingdom that served during World War II. She originally was ordered by the United States Navy as the Tacoma-class patrol frigateUSS Patton (PF-87) and was transferred to the Royal Navy prior to completion.