USS Samaritan (AH-10) was a hospital ship that served with the US Navy in World War II. Prior to that, she served as a US Navy transport ship under the name USS Chaumont (AP-5).

USS Chaumont, one of twelve 13,400-ton (displacement) Hog Island Type B (Design 1024) transports laid down in November 1918 as SS Shope for the U.S. Shipping Board, launched in March 1920[ citation needed ] at Hog Island, Pennsylvania by the American International Shipbuilding Corporation. [2] [3] In November 1920 the ship was delivered to the Shipping Board and transferred to the War Department on 15 December 1920 with assignment to the U.S. Army Transport Service. Redundant to Army needs, she was transferred “on loan” to the Navy on 3 November 1921 and commissioned on the 22nd, Lieutenant Commander G. H. Emmerson in temporary command. On 1 December 1921, Commander C.L. Arnold assumed command. [1] [3] Permanent transfer to the Navy by Executive order was effective 6 August 1924. [1]

Assigned to transport duty, Chaumont sailed the Atlantic, Pacific, and Caribbean throughout the 1920s and 1930s. From her home port at San Francisco, she commenced a career of trans-Pacific troop service that initially consisted of voyages between California and Manila via Honolulu. Two or three voyages in 1925-26 took her to Shanghai instead of Manila, and she continued to stop at Shanghai at least once during most subsequent years. One of her most important contributions, when in the Pacific, was aiding in the collection of meteorological information used by the Weather Map Service of the Asiatic Fleet. She also carried military supplies, Marine expeditionary forces, sailors and their dependents, and occasionally members of congressional committees on inspection tours, calling at ports from Shanghai to Bermuda.

In August 1926 she sailed from San Francisco through the Panama Canal to Annapolis. The return trip took her to Norfolk, Virginia, where she was drydocked for routine maintenance, and then to Guantanamo Bay. Such voyages between the East and West Coasts also became near-annual events.

Chaumont's voyages to Shanghai provided important assistance to U.S. Far Eastern diplomacy during the 1920s and 1930s by supporting the Marine Corps units deployed to the International Settlement in that city to protect U.S. nationals there. At the end of January 1932 Japanese forces in the Settlement attacked nearby Chinese forces, leading to intensive fighting in the city.

Chaumont was in Manila at the time, and on 31 January the Navy Department ordered her to embark the 1,000 men of the Army's 31st Infantry Regiment and sail for Shanghai. Responding rapidly, Chaumont cleared Manila with the troops on board on 2 February and arrived at Shanghai on the 5th.

Five years later, in mid-September 1937, Chaumont rushed the 6th Marine Regiment to Shanghai to reinforce the 4th Regiment that was protecting the Settlement during the all-out Japanese effort to seize the city from tenacious Chinese defenders. Chaumont suffered two mishaps during her China service in 1936-37, a week-long period aground at Chingwangtao and a collision at Shanghai with the Italian cruiser Raimondo Montecuccoli.

When the Japanese attacked Pearl Harbor in December 1941, Chaumont was on one of her regular voyages from Hawaii to Manila, carrying sailors, civilian workmen, and cargo that included munitions. [3] [4] [5] She was diverted as part of the "Pensacola Convoy" to Brisbane then, after a period of reloading the convoy's men and cargo, she proceeded to Darwin, Australia with Navy supplies where she discharged her passengers and cargo on 5 January 1942. [3] [6] [7] [5] After returning to Brisbane she went to Sydney then Wellington, New Zealand and Balboa before returning to San Francisco on 29 March 1942. [3] After two runs to Pearl Harbor, the now elderly transport was assigned to service between Seattle and Alaska, bringing men and supplies to assist in the defense of the Aleutians. Selected in March 1943 for conversion to a hospital ship, Chaumont was decommissioned in August for conversion at Seattle.

Renamed Samaritan (AH-10), she was recommissioned in March 1944. Between 25 March and 11 May, she made two voyages from San Francisco to Hawaii, with passengers outward bound and patients homeward bound. Arriving in Honolulu a third time 11 May, she continued to Kwajalein, where from 17 June to 1 July, she treated casualties from the Saipan invasion. On 8 July she arrived off Saipan itself to embark patients for evacuation to Noumea, New Caledonia, from which she returned to Saipan 1 August for two weeks of duty as a receiving hospital.

Samaritan evacuated patients from Guam to Guadalcanal, and from Peleliu to the Russell Islands in August and September 1944. After a brief overhaul at Espiritu Santo, she served as base hospital at Ulithi until 16 February 1945, when she sailed for Iwo Jima. She arrived off the bitterly engaged island 20 February, and sailed 2 days later with 606 patients on board for Saipan. On the second day out, eight men were buried at sea. The hospital ship returned to Iwo Jima 25 February 1945 to embark patients for transportation to Guam on the first of two such voyages. She arrived at Ulithi 2 April, and a week later got underway for embattled Okinawa. Arriving 13 April, she received casualties at the beach during the daytime and withdrew at night to the transport areas offshore, alternating her stays at Okinawa with evacuation voyages to Saipan until 1 July, when she sailed from Saipan for Pearl Harbor. Here she took patients from several island hospitals on board, sailed to San Francisco, and on 10 September back to Pearl Harbor thence Sasebo, where she provided hospital facilities to occupation forces until 15 March 1946.

She returned to San Francisco 23 April, and was decommissioned there 25 June 1946. On 29 August 1946 she was transferred to the Maritime Commission for disposal, and was delivered to a scrapping firm in January 1948.[ citation needed ]

The second USS Mercy (AH-8) was a Comfort-class hospital ship laid down under Maritime Commission contract by Consolidated Steel Corporation at the Wilmington Yard, Wilmington, California, on 4 February 1943. She was acquired by the US Navy from the Maritime Commission on 25 March 1943 and launched the same day, sponsored by Lieutenant Doris M. Yetter, NC, USN, who had been a prisoner of war on Guam in 1941. She was converted from a cargo ship to a hospital ship by Los Angeles Shipbuilding & Drydock Company, San Pedro, California and commissioned 7 August 1944, with Captain Thomas A. Esling, USNR, in command.

The second USS Solace (AH-5) was built in 1927 as the passenger ship SS Iroquois by the Newport News Shipbuilding and Drydock Co., Newport News, Virginia. The liner was acquired by the Navy from the Clyde Mallory Steamship Line on 22 July 1940, renamed Solace (AH-5); converted into a hospital ship at the Atlantic Basin Iron Works, Brooklyn, N.Y., and was commissioned on 9 August 1941, Captain Benjamin Perlman in command. 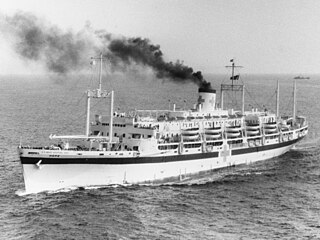 USS Haven (AH-12) was the lead ship of her class of hospital ships built for the U.S. Navy during World War II. Laid down as SS Marine Hawk, she was transferred from the Maritime Commission for conversion to a hospital ship, and served in that capacity through the end of the war. She was redesignated APH-112 in June 1946 for participation in Operation Crossroads, returning to her original AP-12 designation in October 1946. Haven participated in the Korean War and eventually ending her military career acting as a floating hospital in Long Beach, California. She was later converted to a chemical carrier and scrapped in 1987.

The first USS Henderson (AP-1) was a transport in the United States Navy during World War I and World War II. In 1943, she was converted to a hospital ship and commissioned as USS Bountiful (AH-9).

USS Leo (AKA-60), an Andromeda-class attack cargo ship, was named for the constellation Leo. She is the only ship of the United States Navy to hold this name. USS Leo served as a commissioned ship for 10 years and 5 months.

USS Shoshone (AKA-65) was a Tolland-class attack cargo ship of the United States Navy, named after a river in Wyoming. She was designed to carry military cargo and landing craft, and to use the latter to land weapons, supplies, and Marines on enemy shores during amphibious operations. USS Shoshone served as a commissioned ship for 21 months.

USS Haskell (APA-117) was the lead ship of her class of attack transports, built for the United States Navy during World War II. She was of the VC2-S-AP5 Victory ship design type. Haskell was named for the Haskell Counties of Kansas, Oklahoma, and Texas. 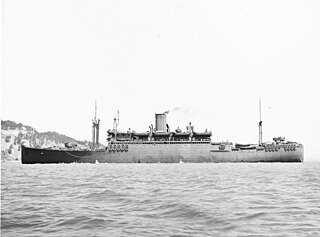 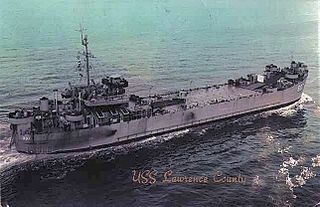 USS Lawrence County (LST-887) was a LST-542-class tank landing ship built for the United States Navy during World War II. Named after counties in eleven U.S. states, she was the only U.S. Naval vessel to bear the name.

USS Talamanca (AF-15) was a United Fruit Company cargo and passenger liner that served as a United States Navy Mizar-class stores ship in World War II. In peacetime before and after the war she carried fruit and passengers; in US Navy service she supplied troops and ships in the Pacific Ocean theatre of World War II.

USS Kerstin (AF-34) was an Adria stores ship acquired by the U.S. Navy for service in World War II. Her task was to carry stores, refrigerated items, and equipment to ships in the fleet, and to remote stations and staging areas.

USS Lycoming (APA-155) was a Haskell-class attack transport acquired by the U.S. Navy during World War II for the task of transporting troops to and from combat areas.

USS Gosper (APA-170) was a Haskell-class attack transport acquired by the U.S. Navy during World War II for the task of transporting troops to and from combat areas.

USS Jerauld (APA-174) was a Haskell-class attack transport acquired by the U.S. Navy during World War II for the task of transporting troops to and from combat areas.

USS Karnes (APA-175) was a Haskell-class attack transport acquired by the U.S. Navy during World War II for the task of transporting troops to and from combat areas.

The third USS Comet (AP-166) was a United States Navy La Salle-class transport in commission from 1944 to 1946. She saw service in the Pacific Theater of Operations during the latter stages of World War II and the immediate postwar period.