Last updated December 15, 2020
For other ships with the same name, see USS Wasp.

USS Wasp of the United States Navy was a sailing sloop-of-war captured by the British in the early months of the War of 1812. She was constructed in 1806 at the Washington Navy Yard, was commissioned sometime in 1807, Master Commandant John Smith in command. In 1812 she captured HMS Frolic, but was immediately herself captured. The British took her into service first as HMS Loup Cervier and then as HMS Peacock. She was lost, presumed foundered with all hands, in mid-1814.

In 1808 Wasp was heavily involved in supporting Jefferson's Embargo, including delivering an army garrison from New York City to Passamaquoddy in June, patrolling Casco Bay, Maine, in the winter of 1808-1809, and remaining at Portland until May, 1809. Until 1809 she was commanded by Master Commandant John Smith. [2] In the final weeks of 1810, she was operating from the ports of Charleston, South Carolina, and Savannah, Georgia, presumably patrolling the waters along southern Atlantic coast. In 1811, she sailed to Hampton Roads, Virginia, where she and the brig Nautilus joined frigates United States and Congress in forming a squadron commanded by Commodore Stephen Decatur. [3]

On 9 March 1812 Wasp sailed from New York for France to deliver an adventurer named John Henry who had sold correspondence to President Madison indicating Britain's interest in determining if the New England states wished to secede from the union. The correspondence, known as the Henry Papers, helped build outrage in Congress against Britain that led to the declaration of war.

Wasp, under the command of Master Commandant Jacob Jones continued to operate along the coast of the middle states after the United States went to war with Britain in June 1812. [4] Her single action came in October. On 13 October, she sailed from the Delaware River and two days later encountered a heavy gale that tore away her jib boom and also washed two crewmen overboard. The following evening, Wasp encountered a squadron of ships and, in spite of the fact that two of their number appeared to be large men-of-war, made for them straight away. She finally caught the enemy convoy the following morning and discovered six merchantmen under the protection of a 22-gun sloop-of-war, HMS Frolic. [5] [6]

At half past eleven in the morning of 18 October, Wasp and Frolic closed to do battle, commencing fire at a distance of 50 to 60 yards (46 to 55 m). In a short, sharp, fight, both ships sustained heavy damage to masts and rigging, but Wasp prevailed over her adversary by boarding her. Unfortunately for Wasp, a British 74-gun ship-of-the-line, HMS Poictiers, appeared on the scene. Frolic was crippled and Wasp's rigging and sails were badly damaged. At 4:00 PM Jones had no choice but to surrender Wasp; he could neither run nor fight such an overwhelming opponent. [5] [7]

Wasp was briefly given the name Loup Cervier on her capture. [1] [Note 1] She was commissioned in 1813 on the Halifax station under Captain Charles Gill. [1] Captain William William Mends succeeded Gill, [8] taking command on 26 February 1813.

In June Loup Cervier was off New London, where she helped blockade the squadron under Commodore Stephen Decatur. James Biddle, who had been first lieutenant of Wasp, had become captain of USS Hornet. He issued a challenge to Mends that their two vessels meet in an engagement. Decatur forbade the engagement until he was sure that it would be an even match. The day after he gave his assent Loup Cervier left New London to patrol elsewhere. [9]

Thereafter Loup Cervier captured or recaptured four vessels. On 27 June she captured the schooner Little Bill, John Roach master, which had been sailing from St Bartholomew to North Carolina. She was carrying a cargo of sugar and molasses. Little Bill was restored. [10] Another report gives the vessel's name as Little Bell. [11]

Then on 28 August Loup Cervier captured the ship Hope, of 468 tons (bm), J. Emery master. Hope was sailing from Lisbon to Newport, Rhode Island with a cargo of salt. She too was restored. [12]

On 29 October Loup Cervier recaptured the brig John and Mary, T. Collins, master. [13] Lastly, Loup Cervier was one of four British warships that shared in the capture of the sloop Emeline, of 44 tons (bm), O. Adams, master. Emeline was sailing from New York to Rhode Island with a cargo of 240 barrels of flour. [14]

At some point Loup Cervier was renamed Peacock, Hornet having captured and sunk the Cruizer-class brig-sloop Peacock in February 1813. Mends was appointed to command of Terpsichore on 23 March 1814. [15] Peacock may then have been briefly under the command of Captain G. Donnett. [16] In April or shortly thereafter Commander Richard Coote of Borer was promoted to post captain and transferred to Peacock. [17]

Peacock was under Coote's command when she disappeared off the Virginia Capes. [20] She apparently had foundered on 23 July 1814. [21]

USS Eagle, was a ship which served in the United States Navy in 1813-1815. Originally a merchant sloop, she was purchased at Vergennes, Vermont on Lake Champlain in 1812 and fitted as either sloop of war or brig for naval service. The British captured her in 1813 and renamed her HMS Finch, only to lose her back to the Americans at the Battle of Lake Champlain in 1814. She was sold in 1815.

The capture of HMS Frolic was a naval action fought in the Atlantic on 18 October 1812, between the sloop-of-war USS Wasp, commanded by Master Commandant Jacob Jones, and the Cruizer-class brig-sloopHM Brig Frolic, under Commander Thomas Whinyates. The Americans captured the British vessel, but both vessels shortly thereafter captured by a British ship of the line which happened upon the scene of the battle.

Seven ships of the Royal Navy have borne the name HMS Peacock:

HMS Poictiers was a 74-gun Royal Navy third rate. This ship of the line was launched on 9 December 1809 at Upnor. During the War of 1812 she was part of blockade of the United States. She was broken up in 1857. 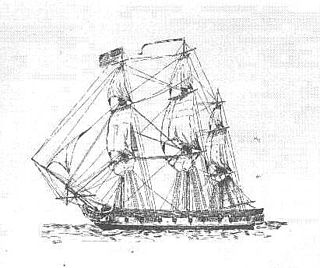 USS Wasp was a sloop-of-war that served in the United States Navy in 1814 during the War of 1812. She was the fifth United States Navy ship to carry that name. She carried out two successful raiding voyages against British trade during the summer of 1814, in the course of which she fought and defeated three British warships. Wasp was lost, cause unknown, in the Atlantic in early autumn, 1814.

HMS Avon was a Royal Navy Cruizer-class brig-sloop built at Falmouth and launched in 1805. In the War of 1812 she fought a desperate action with USS Wasp that resulted in Avon sinking on 27 August 1814.

HMS Niemen was a Royal Navy 38-gun fifth-rate frigate. She began her career as the Niémen, a 44-gun French Navy Armide-class frigate, designed by Pierre Rolland. She was only in French service for a few months when in 1809 she encountered some British frigates. The British captured her and she continued in British service as Niemen. In British service she cruised in the Atlantic and North American waters, taking numerous small American prizes, some privateers but mostly merchantmen. She was broken up in 1815, at the end of the Napoleonic Wars and the War of 1812.

USS Rattlesnake was the brig Rambler built in Medford, Massachusetts, in 1812 that the United States Navy purchased in July 1813. Rattlesnake captured numerous British merchant vessels before HMS Leander captured her in mid-1814. The Royal Navy apparently purchased her at Nova Scotia, but there is no record of her subsequent career. 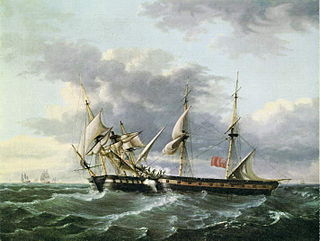 HMS Frolic was an 18-gun Cruizer-class brig-sloop of the Royal Navy. She was built by Boole, of Bridport and was launched on 9 February 1806. Although she took part in the capture of Martinique, Guadaloupe, and Saint Martin, she appears to have had an uneventful career until 8 October 1812, when the American sloop-of-war USS Wasp captured her after a fierce fight. Later that day the British recaptured Frolic and captured Wasp. Frolic was broken up in 1813.

USS Frolic was a sloop-of-war that served in the United States Navy in 1814. The British captured her later that year and she served in the Royal Navy in the Channel and the North Sea until she was broken up in 1819. 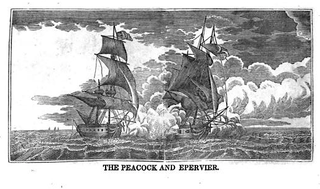 HMS Epervier was an 18-gun Cruizer-class brig-sloop of the Royal Navy, built by Ross at Rochester, England, and launched on 2 December 1812. USS Peacock captured her in 1814 and took her into service. USS Epervier disappeared in 1815 while carrying dispatches reporting the signing of a treaty with the Dey of Algiers.

HMS Landrail was a Cuckoo-class schooner built by Thomas Sutton at Ringmore, Teignmouth. Like all her class she carried four 12-pounder carronades and had a crew of 20. She had a relatively uneventful career during the Napoleonic Wars and the War of 1812 until 1814 when she was taken in a notable action, and then retaken. She was sold in approximately 1818.

HMS Shelburne was the American letter of marque schooner Racer, built in Baltimore in 1811 and captured by the British in 1813. She served on the American coast, capturing the American brig Frolic. She also captured some merchantmen and was sold in Britain in 1817.

HDMS Lolland was launched in March 1810. She served in at least four major engagements during the Gunboat War before she was transferred to the Norwegian navy after the Treaty of Kiel brought about the separation of Norway from Denmark in 1814. Lolland continued to serve with the Norwegian Navy until sold in 1847.

HMS Canso was the American letter of marque schooner Lottery, launched in 1811, which a British squadron captured in 1813. The Royal Navy took Lottery into service as HMS Canso and she served during the War of 1812 and briefly thereafter. The navy sold her in 1816.

HMS Rover was a Royal Navy Cruizer-class brig-sloop laid down in 1804 but not launched until 1808. She served in the North Sea, off the north coast of Spain, in the Channel, and on the North American station. She captured two letters-of-marque and numerous merchant vessels before being laid-up in 1815. She then sat unused until she was sold in 1828. 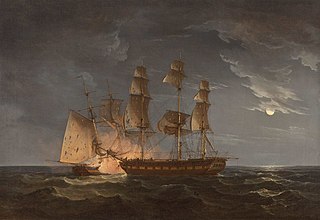 Comet, an American schooner, was built in 1810 at Baltimore, Maryland. She was owned by "a group of wealthy Baltimore investors." Under Captain Thomas Boyle, who was a part owner of the schooner, Comet sailed from July 1812 to March 1814 as a privateer, which was a type of ships licensed by the United States during the War of 1812 to harass the British merchant vessels and divest their cargoes.