USS Zafiro was a collier, a bulk cargo ship, that served in the United States Navy from 1898 until 1904.

Zafiro was constructed in 1884 in the United Kingdom of Great Britain and Ireland by Hall, Russell & Company at Aberdeen, Scotland. Admiral George Dewey purchased her for the U.S. Navy at Hong Kong, China on 9 April 1898 just before his Asiatic Squadron sailed for the Philippine Islands at the beginning of the Spanish–American War.

Hall, Russell & Company, Limited was a shipbuilder based in Aberdeen, Scotland. 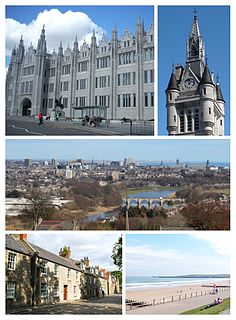 Aberdeen is a city in northeast Scotland. It is Scotland's third most populous city, one of Scotland's 32 local government council areas and the United Kingdom's 37th most populous built-up area, with an official population estimate of 196,670 for the city of Aberdeen and 228,800 for the local council area.

Though the Secretary of the Navy's Report for 1900 indicates that Zafiro was placed in commission on 10 April 1898, her role as a commissioned ship must have been unique indeed for her complement showed only one U.S. Navy man, her commanding officer, aboard. Her status in the Navy from 1898–1900 is further complicated by the fact that there are no deck logs extant for her during the period; her first log begins on 20 September 1900. Finally, after her service in the Spanish–American War, which ended in August 1898, she had no naval complement on board until Ensign L. A. Gotten reported on board to assume command on 10 May 1900. Thus, the date upon which she was placed in commission cannot be established with any precision. 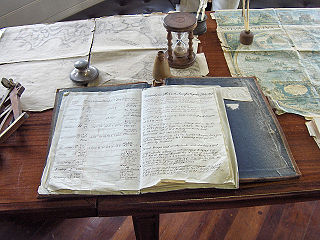 A logbook is a record of important events in the management, operation, and navigation of a ship. It is essential to traditional navigation, and must be filled in at least daily.

In any event, Zafiro departed Hong Kong with Dewey's squadron in April 1898 and served with it as a collier and supply ship during the Battle of Manila Bay and the ensuing Philippines campaign. The lack of documents covering her activities in 1898 and the first half of 1899 precludes any detailed narrative for that period. Presumably, she plied the waters of the Philippine Islands carrying troops, supplies, and dispatches between points in the archipelago. Based at Cavite on Luzon, she is known to have performed such missions during the period from July 1899 – June 1904. Those movements—in support of the United States Army's suppression of the Philippine insurrection and campaigns against the Moslem Moro tribesmen—took her to a host of exotic places, and the length and breadth of the islands.

The Battle of Manila Bay, also known as the Battle of Cavite, took place on 1 May 1898, during the Spanish–American War. The American Asiatic Squadron under Commodore George Dewey engaged and destroyed the Spanish Pacific Squadron under Contraalmirante Patricio Montojo. The battle took place in Manila Bay in the Philippines, and was the first major engagement of the Spanish–American War. The battle was one of the most decisive naval battles in history and marked the end of the Spanish colonial period in Philippine history. 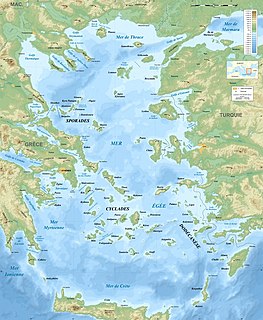 An archipelago, sometimes called an island group or island chain, is a chain, cluster or collection of islands, or sometimes a sea containing a small number of scattered islands.

A Navy List or Naval Register is an official list of naval officers, their ranks and seniority, the ships which they command or to which they are appointed, etc., that is published by the government or naval authorities of a country.

Soon afterwards, on 20 Oct 1910, Zeeve sold her to the Government of Mexico. In 1917, the vessel reappeared as the French-owned sailing vessel Bowler in a British Columbia shipyard, and refitted with wood planking. As such, this change made it hard for the owner to getting a marine rating from Bureau Veritas or Lloyd's of London, and - in 1918 - it was suggested that she be re-rigged into a coastal vessel.

Bureau Veritas S. A. is an international certification agency. In addition to certifications, they provide HSE expertise. Today the headquarters are in Neuilly-sur-Seine, nearby La Défense. The company went public on the Paris Bourse in October 2007.

Lloyd's of London, generally known simply as Lloyd's, is an insurance and reinsurance market located in London, United Kingdom. Unlike most of its competitors in the industry, it is not an insurance company; rather, Lloyd's is a corporate body governed by the Lloyd's Act 1871 and subsequent Acts of Parliament and operates as a partially-mutualised marketplace within which multiple financial backers, grouped in syndicates, come together to pool and spread risk. These underwriters, or "members", are a collection of both corporations and private individuals, the latter being traditionally known as "Names".

On 20 August 1919, it was re-registered in Panama, as the Belen Quezada, as the first international "flag of convenience" vessel, to run alcohol between Canada and the United States during Prohibition.

The vessel was deleted from the Panamanian ship registry in 1931. 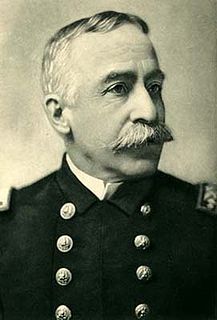 George Dewey was Admiral of the Navy, the only person in United States history to have attained the rank. He is best known for his victory at the Battle of Manila Bay during the Spanish–American War.

USS Culgoa (AF-3) was a refrigerated supply ship in the United States Navy. 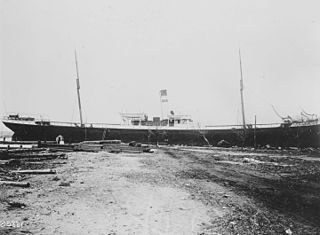 The first USS Abarenda (AC-13/AG-14) was a collier in the service of the United States Navy during World War I. 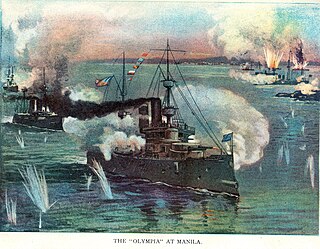 The Dewey Medal was a military decoration of the United States Navy which was established by the United States Congress on June 3, 1898. The medal recognizes the leadership of Admiral of the Navy George Dewey, during the Spanish–American War, and the Sailors and Marines under his command. 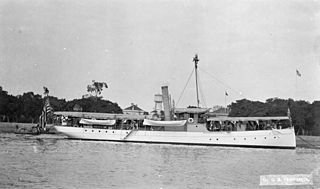 USS Pampanga (PG-39) was a schooner-rigged iron gunboat in the United States Navy during the Philippine-American War. She retained her Spanish name.

USS Nanshan (AG-3) was a collier in the service of the United States Navy. 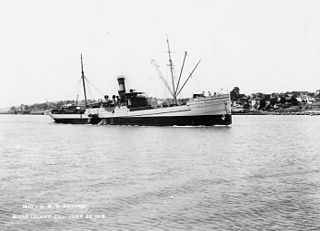 The first USS Saturn (AG-4) was an iron collier in the United States Navy.

The second USS Monterey (BM‑6) was the sole Monterey-class monitor. Laid down by Union Iron Works, San Francisco, California, 20 December 1889, she was launched 28 April 1891, sponsored by Miss Kate C. Gunn. She was commissioned 13 February 1893, with Captain Lewis Kempff in command. 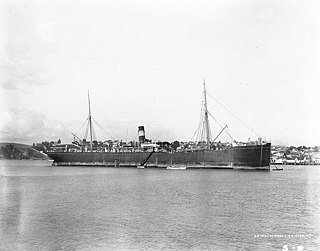 USS Ajax (AC-14/AG-15) was a collier in the United States Navy. Originally she retained her previous name of Scindia, and was renamed for the mythical Ajax in 1901. In 1921, she became a receiving ship and was redesignated AC-14. She was reclassified as a seaplane tender and given the hull designator AG-15 in 1924. 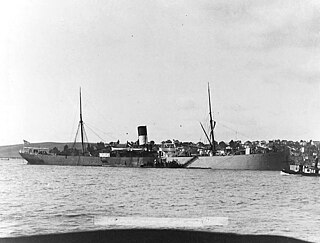 USS Brutus, formerly the steamer Peter Jebsen, was a collier in the United States Navy. She was built in 1894 at South Shields-on-Tyne, England, by John Readhead & Sons and was acquired by the U.S. Navy early in 1898 from L. F. Chapman & Company. She was renamed Brutus and commissioned at the Mare Island Navy Yard on 27 May 1898, with Lieutenant Vincendon L. Cottman, commanding officer and Lieutenant Randolph H. Miner, executive officer. 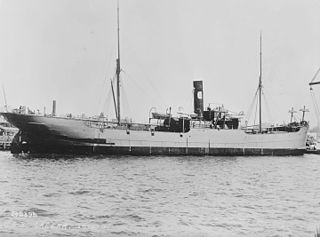 USS Caesar (AC-16) was a collier built in 1896 by Ropner and Sons, Stockton-on-Tees, England, as Kingtor; purchased by the United States Navy on 21 April 1898; fitted out by New York Navy Yard; and commissioned on 13 May 1898, Lieutenant Commander A. B. Speyers in command. 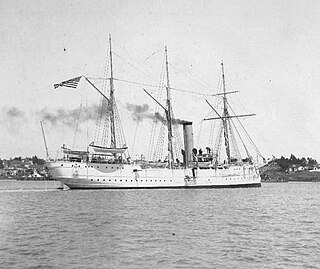 USS Quiros (PG-40), previously designated Gunboat No. 40, was a United States Navy gunboat in commission from 1900 to 1904, from 1904 to 1908, and from 1910 to 1923, seeing service in the Philippines and China. Prior to her U.S. Navy service, she was in commission in the Spanish Navy from 1896 to 1898 as Quirós, seeing service during the Philippine Revolution and the Spanish-American War. 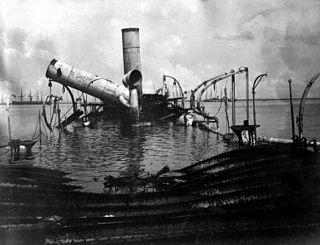 Reina Cristina was an Alfonso XII-class unprotected cruiser of the Spanish Navy which fought in the Battle of Manila Bay. 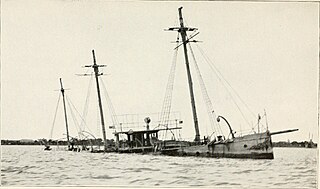 Don Antonio de Ulloa was a Velasco-class unprotected cruiser of the Spanish Navy that fought in the Battle of Manila Bay during the Spanish–American War.

USS Nero (AC–17), a steel steam collier, was built in 1895 as steamer Whitgift by J.L. Thompson and Sons, Sunderland, England; purchased on 30 June 1898 from McCondray and Co. at San Francisco; and commissioned on 8 June 1898, Commander Charles Belknap in command. 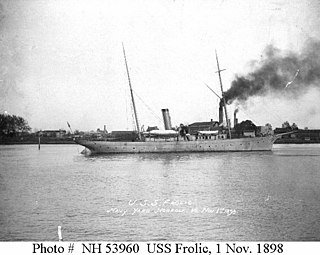 The Battle of Olongapo was fought September 18–23, 1899, during the Philippine–American War. The battle featured both land and sea fighting, of which the objective was the destruction of the single Filipino artillery gun in Olongapo, a menace to American ships crossing the nearby sea.