Union Sportive de Boulogne-sur-Mer Côte d'Opale (commonly referred to as US Boulogne or frequently, simply Boulogne) is a French association football club based in the commune of Boulogne-sur-Mer. The club was founded in 1898 and currently plays in Championnat National 2, the fourth level of French football, having been relegated from the Championnat National at the end of the 2021–22 season.

The club was formed in 1898 and its achievements are comparatively minor, with their biggest feat to date consisting of reaching the semi-finals during the 1936–37 edition of the Coupe de France. Boulogne play their home matches at the Stade de la Libération, which seats 15,004 having previously seated only 7,000 prior to its renovation in 2007.

US Boulogne were originally founded in December 1898 by a group of young local athletes. While they mainly focused originally on athletic events, they created a football team to provide themselves with sporting competition in the winter months, and made a decent job in their first few years as a football club. Boulogne won the Maritime Championship three years running between 1904 and 1906. They next won the Championship in 1909 and their final victory of this division was in 1922. In 1924, Boulogne moved to the Northern Championship and fared well. The team also did well in the Coupe de France  – reaching the quarter-finals in 1929 and the last 16 three times.

In 1926, Boulogne won the Northern League and only six years later, they decided to become a professional club. In 1935, under chairman Marcel Lacroix, the team joined the professional leagues. However, they played averagely in Division Two but there were a few bright sparks in the team. The Coupe de France 1937 competition saw Boulogne reach the semi-finals, but they were convincingly beaten by FC Sochaux 6–0. After the war, Boulogne, reverted to amateur status – and only decided to become a professional team again in 1957, when they were re-elected into Division Two. They stayed comfortably in Division Two for 22 years but then plummeted through the divisions – suffering consecutive relegations. The Coupe de France competition only provided little respite, as the team made the last 16 three times.

Robert Senechal arrived in 1983 and stabilised the club in Division Four. They missed out on promotion by a narrow margin in 1984 – but were finally promoted in 1991. However, it was short-lived and they were relegated the following season. In June 1994, it was announced that Boulogne were in serious debt – owing ₣3 million. However, mayor of Boulougne and billionaire John Muselet intervened to save the club and appointed Jacques Wattez as chairman. Under the leadership of Wattez, the club adopted a new official name – Union Sportive Boulogne Côte d'Opale – in July 1994. as a new company, the debts of the club were wiped and Boulogne – although still struggling in Division Four – reached the last sixteen of the Coupe de France again in 1997. They earned a home tie against Ligue 1 side Olympique de Marseille. Although Boulogne battled bravely through the match, they narrowly lost to their illustrious opponents 0–1.

Boulogne were slowly building their team in the Championnat National and under manager Philippe Montanier, the club clinched promotion to Ligue 2 with a tense 2–1 victory over SC Toulon. However, Boulogne were initially blocked from playing in Ligue 2 due to financial problems but after hard work, they were given the green light to play in that league for the 2007–08 season. They struggled that season and on the final day, they were occupying the final relegation spot, one point from safety. Boulogne played at home to Chamois Niortais FC, who were one place above Boulogne. A tense game saw Boulogne win the match in the 95th minute through defender Damien Perrinelle and it kept Boulogne up whilst sending Niort down to the Championnat National.

The 2008–09 season saw Boulogne do the opposite from last season and win promotion on the final day of the season after beating SC Amiens 4–0, replacing Strasbourg in the final promotion place by a single point. Striker Grégory Thil finished top scorer with 18 goals as the side made their first-ever appearance in the Ligue 1. They stayed just one season, being relegated in 2010. Two seasons later they suffered a further relegation back to Championnat National. [1]

Below are the notable players who have represented Boulogne in league and international competition since the club's foundation in 1919.

En Avant Guingamp, commonly referred to as EA Guingamp, EAG, or simply Guingamp, is a professional football club based in the commune of Guingamp in France's Brittany region. The club was founded in 1912 and play in Ligue 2, the second tier of French football. The club has appeared in the Ligue 1, the top flight of French football, for 13 seasons, and is known for its relative success given Guingamp's small population of only 7,000 people. 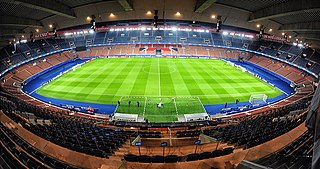 Association football is the most popular sport in France. The French Football Federation is the national governing body and is responsible for overseeing all aspects of association football in the country, both professional and amateur. The federation organizes the Coupe de France and is responsible for appointing the management of the men's, women's and youth national football teams in France. The federation gives responsibility of Ligue 1 and Ligue 2 to the Ligue de Football Professionnel who oversee, organize, and manage the country's top two leagues. The LFP is also responsible for organizing the Coupe de la Ligue, the country's league cup competition. The French Football Federation also supervises the overseas departments and territories leagues and hosts football club AS Monaco, a club based in the independent sovereign state of Monaco. In 2022, the FFF has 2.1 million licensees, 1.8 million players and 14,000 registered clubs.

Football Club Lorient Bretagne Sud is a French association football club based in Lorient, Brittany. The club was founded in 1926 and currently competes in Ligue 1, the top flight of French football, following promotion from Ligue 2 in the 2019–20 season. Lorient plays its home matches at the Stade Yves Allainmat, named after the former mayor of Lorient. The stadium is surnamed Stade du Moustoir because of its location within the city. The team is managed by Régis Le Bris.

Football Club Gueugnonnais is a French association football club based in Gueugnon, Burgundy. The club was formed in 1940 and plays its home matches at the Stade Jean Laville located within the city. 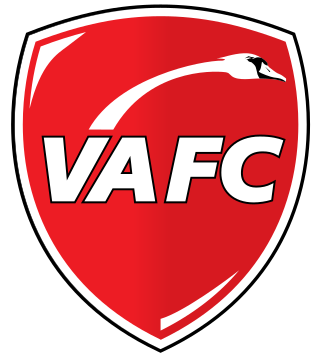 Valenciennes Football Club is a French association football club based in Valenciennes. The club was founded in 1913 and currently play in Ligue 2, the second tier of French football. Valenciennes plays its home matches at the recently built Stade du Hainaut located within the city.

Union Sportive Créteil-Lusitanos is a French football club based in Créteil, a southeastern suburb of Paris. The club was founded in 1936 and currently play in the Championnat National 2, the fourth level of French football. The football club forms part of an omnisports club that is also known for its handball team.

Tours Football Club, commonly referred to as simply Tours, is a French association football club based in Tours, the capital city of the Indre-et-Loire department. The club was formed in 1919 and currently play at the fifth level of French football. Tours plays its home matches at the Stade de la Vallée du Cher located within the city. 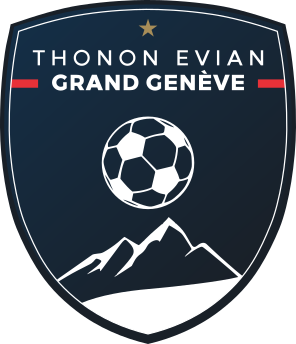 Thonon Evian Grand Genève Football Club, formerly Evian Thonon Gaillard FC, commonly referred to as Thonon Evian or just Evian, is a French association football club based in Thonon-les-Bains that was founded on 1 July 2007. It competes in the Championnat National 2, the fourth tier of the French football league system.

Union Sportive Quevillaise-Rouen Métropole, known as US Quevilly-Rouen, US Quevilly, QRM, Quevilly-Rouen, or simply Quevilly, is a football club based in Le Petit-Quevilly, France. The club plays in Ligue 2 and hosts its home matches at the Stade Robert Diochon, which has a capacity of 12,018. 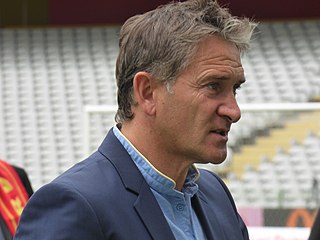 Philippe Jacques William Montanier is French professional football manager and former player who is the head coach of Ligue 1 club Toulouse. As a player, he was as a goalkeeper.

Laurent Guyot is a French professional football manager and former player who is the head coach of Ligue 2 club Annecy. Football Club d'Annecy is a French football club based in the town of Annecy in Haute-Savoie. The team plays its home matches at the Parc des Sports, where the club and its predecessor have been based since 1964. It currently competes in the Ligue 2. 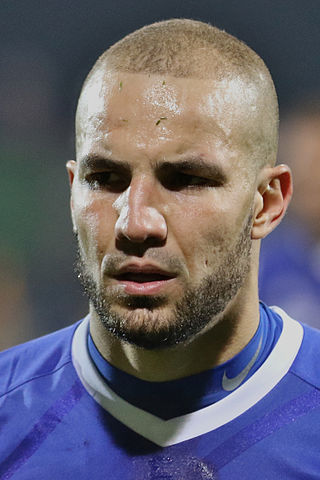 Lakdar Boussaha is a French-Algerian professional footballer who plays as a forward.

The 2010–11 Ligue 2 season was the 72nd since its establishment. Caen were the defending champions. The fixtures were announced on 22 May 2010 and the season began on 6 August and ended on 27 May 2011. The winter break would be in effect between 22 December and 14 January 2011. There were three promoted teams from the Championnat National, replacing the three teams that were relegated from Ligue 2 following the 2009–10 season. A total of 20 teams currently competes in the league with three clubs suffering relegation to the third division, the Championnat National. All clubs that secured Ligue 2 status for the season were subject to approval by the DNCG before becoming eligible to participate. In addition, German sportswear company Puma, whom the Ligue de Football Professionnel share a partnership with, provided a brand new match ball for the new season.

Football Club Chambly Oise, commonly known as Chambly, is a French football club based in Chambly in the Hauts-de-France region. Their home stadium is the Stade des Marais in the town, and they compete in the Championnat National 2, the fourth tier of French football, as of the 2022–23 season.

Kévin Dupuis is a French professional footballer who currently plays as a striker for US Créteil. He is a former French youth international, having earned a solitary cap for the under-17 team.

The 2011–12 Coupe de la Ligue was the 18th edition of the French league cup competition. The defending champions were Marseille, who defeated Montpellier 1–0 in the 2010–11 edition of the final. The competition was organized by the Ligue de Football Professionnel and open to the 42 professional clubs in France that are managed by the organization. The final was contested on 14 April 2012 at the Stade de France. The winner of the competition will qualify for the 2012–13 UEFA Europa League and be inserted into the third qualifying round.

The 2012–13 Championnat National season was the 15th season since its establishment. The previous season's champions were Nîmes. The league schedule was announced in May 2012 and the fixtures were determined on 7 July. The season began on 3 August and ended on 24 May 2013. The winter break took place from 23 December to 12 January 2013.

Wikimedia Commons has media related to US Boulogne .
This page is based on this Wikipedia article
Text is available under the CC BY-SA 4.0 license; additional terms may apply.
Images, videos and audio are available under their respective licenses.