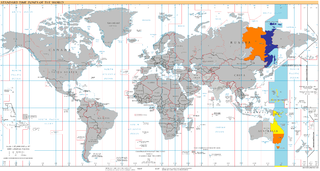 UTC+13:00 is an identifier for a time offset from UTC of +13:00. Because it does not contain any land in the Northern Hemisphere, this time zone is exclusive to the Southern Hemisphere.

The Indonesian archipelago geographically stretches across four time zones from UTC+07:00 in Aceh to UTC+09:00 in Papua. Therefore, the Indonesian government recognizes three time zones in its territory: