Obaidul Haq was born on 2 May 1928 into a traditional Bengali Muslim family in Barothakuri, Zakiganj, Sylhet District. His father, Maulana Zahurul Haq was a notable Sylheti student of Ashraf Ali Thanwi and graduated in Hadith studies from the Darul Uloom Deoband in 1335. His mother was Musammat Aisha Begum. Haq was the second son out of three sons. His elder brother, Ahmadul Haq, collected old books and was the owner of a store known as the Ashrafiyyah Kutubkhana, which opened in Zindabazar, Sylhet not long after the Independence of Bangladesh in 1971. His younger brother, Mawlana Abdul Haq, was a graduate of the Government Madrasah-e-Alia in Dhaka and is a teacher of Hadith at a Qaumi Madrasa. [2]

Haq first studied at the Ghungadi Madrasah where he was taught Persian books such as Mizan Munshaib by Maulana Shamsul Haq. Two years later, he studied at a madrasa in Habiganj under Mawlana Muddathir Ahmad and Mawlana Musir Ali - both graduates of the Darul Uloom Deoband. Haq then studied at Munshibazar Ayargaon Madrasa, founded by his father. In 1942, he enrolled in Darul Uloom Deoband and received his vocation in Tafsir and Hadith from Husain Ahmad Madani and Muhammad Ilyas Kandhlawi. [2]

Obaidul Haq started his career as a teacher in joined Dhaka's Hossainya Ashraful Ulum Madrasa near Bara Katra from 1949, teaching hadith studies. In 1953, he began teaching at the Nanak Wara Madrasa in Karachi. He returned to Bengal in 1954, joining as a teacher at the Dhaka Alia Madrasa, where he taught hadith studies between until 1971 and served as the additional vice principal from 1973 through 1979. He was the Shaikhul Hadith at Chittagong's Patia Madrasa between 1986 and 1987, and held the same position at Sylhet's Jamia Qasimul Uloom Dargah Madrasa from 1987 until his death. [2]

He was also a professor at Faizul Uloom Madrasa at Azimpur in the Dhaka. [2]

He was the longest serving khatib of Baitul Mukarram, the national mosque of Bangladesh. In 2001, he was forced into retirement by the then Awami League government. [3] He then sought a writ petition which overturned the government's decision.

At a conference in 1 April 2005, organised in Paltan Maidan, Dhaka by the Jamiat-e-Ulema-e-Islam he along with the leading ulema of India, Pakistan and Bangladesh declared a fatwa denouncing terrorism. [1]

Later that year, after a series of bombings in Bangladesh he led thousands of worshipers and political activists in a prayer and massive demonstration denouncing terrorism. [4] He remarked that those who were killing people with bombs, were the enemies of Islam and people as well. [5]

In 1994, he expressed concern over the growing support for the unfair practices of Christian proselytizers by non-governmental organisations and the sympathy for them by Bangladeshi left-wing political parties. [6]

On March 21, 2003, he led a large anti-war rally in protest of the invasion of Iraq with Fazlul Haque Amini, where he remarked that:

The US will occupy all the oil-rich Middle East and Muslim countries, including Saudi Arabia and Kuwait, gradually. [7]

In 2005, following the series of bombings by the banned outfit Jama'atul Mujahideen Bangladesh (JMB) while leading the protest denouncing terrorism he remarked: [4]

Islam prohibits suicide bombings. These bombers are enemies of Islam. It is a duty for all Muslims to stand up against those who are killing people in the name of Islam. [4]

Deobandi is an Islamic revivalist movement within Sunni Islam that formed around the Darul Uloom Islamic seminary in the town of Deoband, India, where the name derives from, during the late 19th century. The seminary was founded by Muhammad Qasim Nanautavi, Rashid Ahmad Gangohi, and several other figures in 1866, eight years after the Indian Rebellion of 1857-58; the Deobandi movement's political wing, Jamiat Ulema-e-Hind, was founded in 1919 and played a major role in the Indian independence movement through its propagation of the doctrine of composite nationalism.

The Darul Uloom Deoband is an Islamic seminary in India at which the Sunni Deobandi Islamic movement began. It is located in Deoband, a town in Saharanpur district, Uttar Pradesh. The seminary was established by Muhammad Qasim Nanautavi, Fazlur Rahman Usmani, Sayyid Muhammad Abid and others in 1866. Mahmud Deobandi was the first teacher and Mahmud Hasan Deobandi was the first student.

Allama Muḥammad Anwar Shāh ibn Mu‘az̤z̤am Shāh Kashmīrī was a Kashmiri Islamic scholar. He taught at several institutions, including the Darul Uloom Deoband, which contains a gate named in his honor. He authored books on Islam published in Arabic and Persian. He was first Principal at Madrasa Aminia and served Darul Uloom Deoband as Principal for twelve years.

Azizul Haque also known by his title Shaikhul Hadith was a Bangladeshi Islamic scholar, politician, writer, translator and Islamic lecturer. He is the founder of Khelafat Majlish and first Bangali translator of Sahih al-Bukhari. He was Vice Chancellor of Jamia Rahmania Arabia Dhaka. On an interview published on 1997 September 5 at 'Shaptahik (Weekly) Bichitra' Year 26 he said that the title of 'Shaikhul Hadith' is never given by anyone, rather it is self proclaimed and then other people either support it or don't. 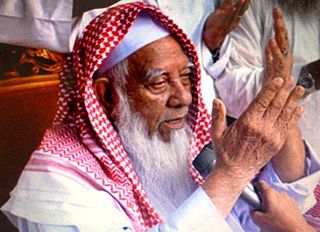 Shah Ahmad Shafi was a Bangladeshi Islamic scholar, the chief of Hefajat-e-Islam Bangladesh, Rector of Al-Jamiatul Ahlia Darul Ulum Moinul Islam Hathazari and also the chairman of Bangladesh Qawmi Madrasah Education Board. He was born in 1916 in Rangunia, Chittagong and was educated at Hathazari Madrasah and Darul Uloom Deoband.

Abdul Haq of Akora Khattak, sometimes referred to as Abdul Haq Akorwi was a Pakistani Islamic scholar and the founder, chancellor, and Shaykh al-Hadith of the Islamic seminary Darul Uloom Haqqania. He was involved in politics as a member of the political party Jamiat Ulema-e-Islam. He served three times in the National Assembly of Pakistan and was an active proponent of the Khatme Nabuwwat movement.

Fuzail Ahmad Nāsiri is an Indian Islamic scholar, Urdu writer and poet. He is professor of hadith and vice-administrator of education at Jamia Imam Muhammad Anwar Shah.

Obaidul Haque was a politician, teacher and the former Member of Parliament of Sylhet-5.

Athar Ali was a Bangladeshi Islamic activist, author, teacher and politician. He participated in the Indian independence movement, and was former president of the Nizam-e-Islam Party. Ali was also a khalifah of Ashraf Ali Thanvi, one of the founders of the Deobandi movement.

Nur Uddin Ahmed Gohorpuri was a Bengali Muslim religious scholar and teacher. He was notable for his association with Qawmi Madrasahs in Bangladesh as well as for having been the founder of Gohorpur Hussainia Madrasa.

Wajihullah Sandwipi was an Islamic public speaker and muhaddith of Bengal. He is noted as the first person from Sandwip to study in Darul Uloom Deoband in Saharanpur district, India.

Nurul Islam Jihadi is a Bangladeshi Deobandi Islamic scholar, educator and spiritual figure. He is the Secretary General of Hefazat-e-Islam Bangladesh and International Majlis-e Tahaffuj-e Khatme Nabuwat Bangladesh, Chancellor and Shaykh al-Hadith of Al Jamiatul Islamia Makhjanul Uloom. He is also a member of the Majlis-e-Shura of Darul Uloom Hathazari and Befaqul Madarisil Arabia Bangladesh, founder and patron of many mosques and madrasas, including Jamia Khatamunnabiyyin in United Kingdom.

Muḥammad Usmān Mansoorpuri was an Indian Muslim scholar who served as the National President of Jamiat Ulama-e-Hind. He taught hadith at the Darul Uloom Deoband and served the seminary as a working rector.

Habībur Rahmān Khairābadi is an Indian Muslim scholar and jurist who serves as the Grand Mufti of Darul Uloom Deoband. He is an alumnus of Darul Uloom Mau, Mazahir Uloom and Aligarh Muslim University and has authored books including The Rules of Slaughter and The Importance of Zakat. He signed the Darul Uloom Deoband's first ever religious edict against terrorism in 2008.