The Hanwa Line is a commuter rail line in the Osaka-Kobe-Kyoto Metropolitan Area, owned and operated by West Japan Railway Company. The 61.3-kilometre (38.1 mi) line runs between Osaka and Wakayama, Japan and has a 1.7-kilometre branchline in a southern Osaka suburb. The name is taken from the first syllables of Osaka and Wakayama.

Naga was a district located in Wakayama, Japan.

Kinokawa is a city in Wakayama Prefecture, Japan.

This page lists Japan-related articles with romanized titles beginning with the letters U and V. For names of people, please list by surname. Please also ignore particles when listing articles. 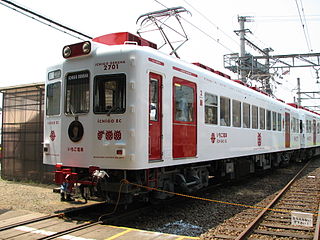 The Kishigawa Line is a railway line in Wakayama Prefecture, Japan. It is the sole line of the Wakayama Electric Railway Co., Ltd. The 14.3 km route extends from Wakayama Station in the city of Wakayama to Kishi Station in neighboring Kinokawa. Including the terminals, the Kishigawa Line has 14 stations. Its gauge is 1,067 mm. The line is single-track and is electrified at 1,500 V DC. Prior to April 1, 2006, the line was part of the Nankai Electric Railway system. 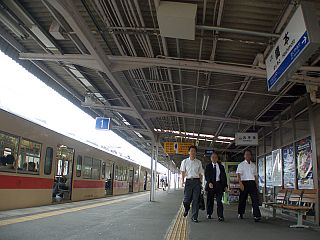 Wakayamashi Station is a railway station in Wakayama, Wakayama Prefecture, Japan. To distinguish it from Wakayama Station, the station is called "City Station".

Wakayama may refer to: