Rana was born in Lalitpur, Bagmati Province, to Sagar SJB Rana and Brinda Rana. [7] He has spent most of his formative life in both Nepal and India. [8] He is married to Urvashi Singh Rana and they have two sons Ayush and Samar.

He received his primary education from St. Xavier's School Jawalakhel, Lalitpur. [7] For his secondary education he was sent to St Joseph's College (North Point) in Darjeeling [7] and completed his high school from Lawrence School, Sanawar, India. [8] [7] He received his undergraduate (Bachelors in Arts) from St Stephen's College, [7] University of Delhi and holds a master's degree from Cornell University, Ithaca, New York (USA). [8] [7] He wrote his thesis on Nepal's foreign policy vis-à-vis India and China, which was titled “Foreign Policy of Nepal: Emphasis on relations with India and China”. [9]

Rana has various publications in both Nepali and English in leading Nepali news media [10] [7] and has worked as a consultant to various NGO/INGOs including The Asia Foundation, SNV Nepal, ESPS/DANIDA and others. [7] He is currently the Advisor to the Nepal Shooting Association. [11] [7]

Just like many Nepali Congress leaders, his political activism commenced in India. [7] During his educational sojourn in Delhi, he established and became the first President of Nepal Students Union, Delhi (Student organization of Nepali Congress Party). [7] [8] In Delhi, he instigated protests and took out rallies in support of the ‘First People's Movement of 1989’ against the autocratic Panchayat System. His interest in global politics and economics led him to join the International Union of Socialist Youth (IUSY) and later was elected as the Vice President. [7]

Upon returning to Nepal he devoted majority of his young days in grassroots politics. [8] [7] By 1998, he was already affiliated to Nepal Tarun Dal and was serving as the district president. [7] [6] While being a member of NTD, he fought his first Constitutional Assembly (CA) elections from Lalitpur Constituency #1 in 2008. [6] [7] He lost by a narrow margin of thousand votes. Unfazed by his early loss, he redeemed himself in the Second CA elections in 2013 by defeating by opponent by a little more than 8000 votes. [6] His victory in 2013 started his legislative career. [6] [7]

As a Member of Parliament, he was a member of the Finance Committee 2014-17 and was also a member of three sub-committees that finalized bills that was passed by the parliament as an Act, which are as follows: [5] [7]

The politics of Nepal functions within the framework of a parliamentary republic with a multi-party system. Executive power is exercised by the Prime Minister and their cabinet, while legislative power is vested in the Parliament. 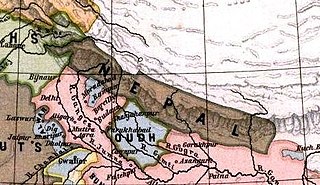 Rana dynasty is a Chhetri dynasty that ruled the Kingdom of Nepal from 1846 until 1951, reducing the Shah monarch to a figurehead and making Prime Minister and other government positions held by the Ranas hereditary. They claimed Kshatriya status themselves. Rana dynasty is historically known for the iron-fisted rule. This changed after the Revolution of 1951 with the promulgation of a new constitution, when power shifted back to the monarchy of King Tribhuvan.

Subarna Shamsher Rana was a leading figure in the movement to overthrow the ruling Rana oligarchy and to establish democracy in Nepal. He was one of the three leaders of the Nepali Congress in the late 1940s, opposing his relatives, the Rana family, who held power in Nepal at the time. He is one of the most revered leaders of Nepali Congress. He died in Calcutta on 9 November 1977. Sashi Sumsher and Yog Prasad Upadhyay brought his ashes back to Nepal.

Field-Marshal Maharaja Sri Teen Chandra Shumsher Junga Bahadur Rana was the Prime Minister of Nepal from the Rana dynasty. He served in this capacity from 27 June 1901 to his death in 1929, after he successfully deposed his liberal and reformist brother Dev Shamsher. Although generally perceived as despotic and conservative, he is credited with several reforms including the abolition of slavery and the Nepal-Britain Treaty of 1923, which recognized Nepal as an independent nation and an ally of Britain.

Rana in Arabic ; the name means "glittering object", "noticeable", stemming from the word yarnū, meaning "to gaze at longingly". It is a given name for females in Arabic-speaking countries.

Nepal Tarun Dal is the youth wing of Nepali Congress Party. The organization is one of the most influential and largest youth organizations in Nepal with working level committees in all districts. The organization has a publication by the name of Tarun. 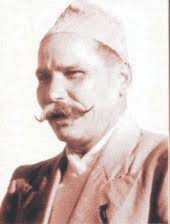 Kunwar Indrajit Singh, popularly known as Dr. K.I. Singh or just K.I. Singh was a Nepali politician and revolutionary who served as the 20th Prime Minister of Nepal in 1957. He was key Nepali Congress in organizing the 1951 Nepali Revolution, and was a leader in its militant wing, the Muktisena, who later refused to recognize the Delhi Accord and was forced to flee the country following a revolt he took part in. In 1955 he returned and formed the United Democratic Party, and following the installation of the Panchayat system he agitated for its end, for which he was jailed. Following his release, he went into self-imposed exile, and much later returned to Nepal and was elected a member to the Rastriya Panchayat. He was known as the "Robin Hood of the Himalayas", and was very popular throughout the country.

Diamond Shumsher Rana was a Nepali writer and political activist known for his acclaimed novels Basanti and Seto Bagh.

Field Marshal Shree Shree Shree Maharaja Sir Juddha Shumsher Jang Bahadur Rana was the Prime Minister of Nepal from 1 September 1932 to 29 November 1945 as the head of the Rana Dynasty. 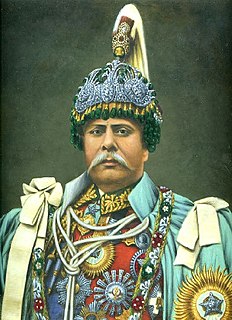 Field Marshal His Highness Shree Shree Shree Maharaja Sir Padma Shumsher Jung Bahadur Rana was the hereditary prime minister of Nepal from 29 November 1945 to 30 April 1948 as the head of the Rana dynasty. 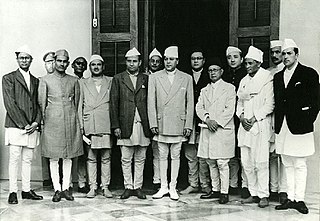 The revolution of 1951 in Nepal, also referred to as Sat Salko Kranti, was a political movement against the direct rule by the Rana dynasty of Nepal which had lasted for 104 years. It marks the beginning of the political awakening and democratic movements in Nepal, and resulted in immediate abolition of the institutionalized hereditary Prime Minister system in Nepal. 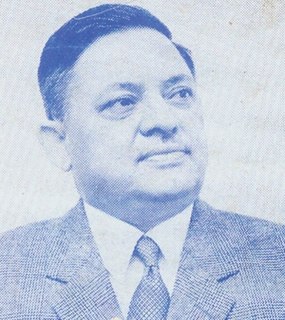 Bhim Bahadur Pande was Nepalese diplomat, bureaucrat and historian. He served as Nepalese Ambassador to India from May 21, 1969 to May 24, 1972. Sardar Bhim Bahadur also served to Juddha Shumsher Jang Bahadur Rana during his youth. He helped out to industrialize the Nepalese Tarai. He later wrote a book about challenges of industrialization in Terai called Tyas Bela Ko Nepal. He was a member of representative group of Nepal in the 1950 Indo-Nepal Treaty of Peace and Friendship. He wrote in the same book about the prejudiced and dominant behaviour of Indian authority on signing the Treaty. He also wrote about tyranny of Rana dynasty in the Nepalese literature and education sector.

Cholendra Shumsher JBR is a Nepali jurist. He is the 29th Chief Justice of the Supreme Court of Nepal. He has been appointed by President on the recommendation of Constitutional Council of Nepal and oathed by Bidhya Devi Bhandari, President of Nepal on 2 January 2019.

Satchit Shamsher Jung Bahadur Rana was the 34th Chief of Army Staff of the Royal Nepalese Army. He was a member of the Rana Dynasty of Nepal.

Pranaya SJB Rana is a writer, editor and journalist based in Kathmandu, Nepal. He is currently editor of The Record, a digital-native news publication focusing on long form reporting, essays, and explainers. Rana was previously Features Editor and Op-Ed editor of The Kathmandu Post and a reporter for Nepali Times. Rana is also the author of a collection of short stories, City of Dreams: Stories, published by Rupa Publications, India.