Udayraj Hindu Inter College is one of the oldest inter colleges of Kashipur, Uttarakhand, India. It is located near Nagnath Temple on the Manpur Road.

The College was established by Raja Udai raj Pratap singh, from Chand Dynasty of Kumaon through one trust named after his mother. K. C. Singh Baba, who is the decedent of the Chand Kings is the Chairman of the trust. The first secretary of that trust was Pt. Govind Ballabh Pant, first chief minister of Uttar Pradesh. The land was donated by raja udai pratap raj singh. In its early days it was a co-ed college, however after the opening of one Government Girls Inter college at Kashipur, it was converted to a boys' college. It was affiliated to UP board and on constitution of Uttrakhand it is now affiliated to Uttrakhand Board. udayraj Hindu inter college kashipur has labs such as Biology lab, Physics lab, Chemistry lab, social science lab, with qualified teachers.

Vishwanath Pratap Singh, also known as V. P. Singh was an Indian politician who was the 7th Prime Minister of India from 1989 to 1990.

Pratap Singh I, popularly known as Maharana Pratap, was a king of Mewar, a region in north-western India in the present-day state of Rajasthan. He was titled as "Mewari Rana" and was notable for his military resistance against the expansionism of the Mughal Empire and was known for his participation in the Battle of Haldighati and Battle of Dewair.

Gogunda is a town and tehsil headquarters of Gogunda tehsil in Udaipur district, located about 35 km in north-west from Udaipur city in the Indian state of Rajasthan. It is situated on a high mountain in Aravalli hills and is reached by crossing a difficult mountain pass. 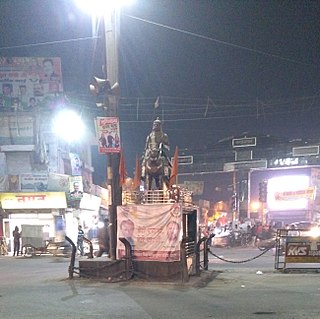 Kashipur[kaːʃiːpʊr] is a city of Udham Singh Nagar district in the Indian state of Uttarakhand, and one of its seven subdivisions. Located in the western part of Udham Singh Nagar district, it is Kumaun's third most populous city and the sixth most populous in Uttarakhand. According to the 2011 Census of India, the population is 121,623 for the city of Kashipur and 283,136 for Kashipur Tehsil.

Udai Singh II was the Maharana of Mewar and the founder of the city of Udaipur in the present-day Rajasthan state of India. He was the 12th ruler of the Mewar dynasty. He was the fourth son of Rana Sanga and Rani Karnavati, a princess of Bundi.

Darbhanga Raj, also known as Raj Darbhanga and the Khandwala dynasty, was a Maithil Brahmin dynasty and the rulers of territories, not all contiguous, that were part of the Mithila region, now divided between India and Nepal.

Devi Garh Palace is a heritage hotel and resort, housed in the 18th-century Devi Garh palace in the village of Delwara. It was the royal residence of the rulers of Delwara principality, from mid-18th century till mid-20th century. Situated amidst in the Aravalli hills, 28 km northeast of Udaipur, Rajasthan, Devigarh forms one of the three main passes into the valley of Udaipur.

Manda was a zamindari, with lands located near Allahabad, Uttar Pradesh, in northern India.

Bija or Beeja is a village and former princely state in the Punjab Hills, in District Ludhiana in India.

Bikaner State was a princely state in the Bikaner region from 1465 to 1947. The founder of the state, Rao Bika, was the eldest son of Rao Jodha, ruler of Jodhpur. Rao Bika chose to found his own kingdom instead of inheriting his father's. Bika defeated the Jat clans of Jangladesh along with his uncle Rao Kandhal and his adviser Kanhaddev Rajpurohit and founded his own kingdom.Battle have been fought in the village of Jangloo, Near which Kanhaddev's son-Harnath Singh Rajpurohit is honoured with a village of Desalsar Purohitan as a jagiri. Its capital was the city of Bikaner in the northern area of present-day Rajasthan State in India.Karni Mata has been designated as the kuldevi of the Royal family of Bikaner.

Kashipur is a village, with a police station, in the Kashipur CD block in the Raghunathpur subdivision of the Purulia district in West Bengal, India. Kalloli, where the CD Block headquarters are located, is close to Kashipur. 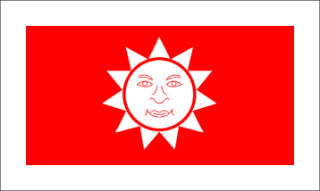 Pratapgarh State, also known as 'Partabgarh', was one of the princely states of India during the period of the British Raj. The state was founded in 1425 as Kanthal state and was later renamed after its capital located in Pratapgarh, Rajasthan.

Datarpur is the village situated in the district Hoshiarpur, Tehsil Mukerian, Punjab (India). Datarpur State was a small precolonial Indian hill state in the Lower Himalayas. The state was founded around 1550 and was annexed by the British in 1849.

Raja Uday Pratap Singh, Raja of Bhinga, C.S.I. was a noted zamindar and philanthropist from Bhinga.