Uel Key was the pseudonym of British author Samuel Whittell Key (1874–1948), [1] who wrote short stories regarding Prof. Arnold Rhymer, the Spook Specialist. These tales appeared in Pearson's Magazine in 1917 and 1918 and were later collected in The Broken Fang and Other Experiences of a Specialist in Spooks (1920). A novel concerning Prof. Rhymer, entitled The Yellow Death, was published the following year.

Key's recurring occult detective, Prof. Arnold Rhymer, is an English medical doctor and lecturer who works closely with Scotland Yard on various cases involving the unusual, weird and/or exotic. Portrayed as a tall, lean, agile and young man, Rhymer is a ghostbuster who depends on his Holmes-like deductive mind and cunning wits to defeat supernatural opponents.

In folklore, a ghost is the soul or spirit of a dead person or animal that can appear to the living. In ghostlore, descriptions of ghosts vary widely from an invisible presence to translucent or barely visible wispy shapes, to realistic, lifelike forms. The deliberate attempt to contact the spirit of a deceased person is known as necromancy, or in spiritism as a séance. Other terms associated with it are apparition, haunt, phantom, poltergeist, shade, specter or spectre, spirit, spook, and wraith.

Joseph Thomas Sheridan Le Fanu was an Irish writer of Gothic tales, mystery novels, and horror fiction. He was a leading ghost story writer of his time, central to the development of the genre in the Victorian era. M. R. James described Le Fanu as "absolutely in the first rank as a writer of ghost stories". Three of his best-known works are the locked-room mystery Uncle Silas, the lesbian vampire novella Carmilla, and the historical novel The House by the Churchyard.

Arthur Machen was the pen-name of Arthur Llewellyn Jones, a Welsh author and mystic of the 1890s and early 20th century. He is best known for his influential supernatural, fantasy, and horror fiction. His novella The Great God Pan has garnered a reputation as a classic of horror, with Stephen King describing it as "Maybe the best [horror story] in the English language." He is also well known for "The Bowmen", a short story that was widely read as fact, creating the legend of the Angels of Mons. 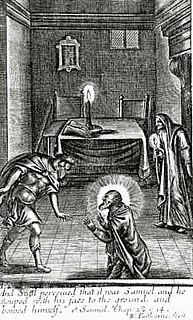 Necromancy is the practice of magic involving communication with the dead – either by summoning their spirits as apparitions, visions or raising them bodily – for the purpose of divination, imparting the means to foretell future events, discover hidden knowledge, to bring someone back from the dead, or to use the dead as a weapon. Sometimes referred to as "Death Magic", the term may also sometimes be used in a more general sense to refer to black magic or witchcraft. 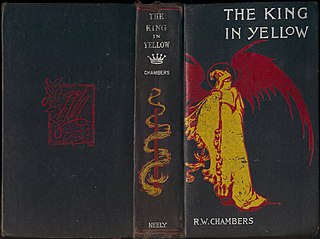 The King in Yellow is a book of short stories by the American writer Robert W. Chambers, first published by F. Tennyson Neely in 1895. The book is named after a play with the same title which recurs as a motif through some of the stories. The first half of the book features highly esteemed horror stories, and the book has been described by critics such as E. F. Bleiler, S. T. Joshi and T. E. D. Klein as a classic in the field of the supernatural. There are ten stories, the first four of which mention The King in Yellow, a forbidden play which induces despair or madness in those who read it. "The Yellow Sign" inspired a film of the same name released in 2001. 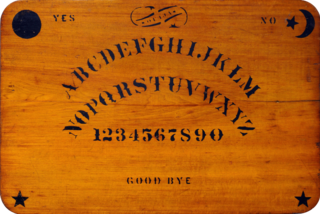 The ouija, also known as a spirit board or talking board, is a flat board marked with the letters of the alphabet, the numbers 0–9, the words "yes", "no", occasionally "hello" and "goodbye", along with various symbols and graphics. It uses a planchette as a movable indicator to spell out messages during a séance. Participants place their fingers on the planchette, and it is moved about the board to spell out words. "Ouija" is a trademark of Hasbro, but is often used generically to refer to any talking board.

The Astral body is a subtle body posited by many philosophers, intermediate between the intelligent soul and the mental body, composed of a subtle material. In many recensions the concept ultimately derives from the philosophy of Plato though the same or similar ideas have existed all over the world well before Plato’s time: it is related to an astral plane, which consists of the planetary heavens of astrology. The term was adopted by nineteenth-century Theosophists and neo-Rosicrucians.

Dark fantasy is a subgenre of fantasy literary, artistic, and cinematic works that incorporate darker and frightening themes of fantasy. It often combines fantasy with elements of horror or has a gloomy dark tone or a sense of horror and dread.

Arnold Drake was an American comic book writer and screenwriter best known for co-creating the DC Comics characters Deadman and the Doom Patrol, and the Marvel Comics characters the Guardians of the Galaxy, among others. 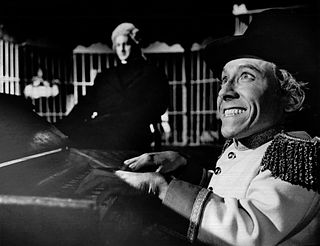 Weird West is a subgenre that combines elements of the Western with another genre, usually horror, occult, fantasy, or science fiction. 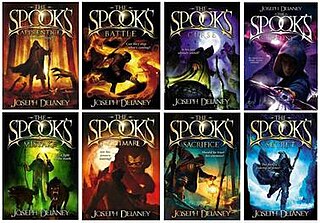 Spook's, published as The Last Apprentice series in the U.S., is a dark fantasy series of books written by British author Joseph Delaney and published in the UK by The Bodley Head division of Random House Publishing. The series consists of four arcs, titled The Wardstone Chronicles, The Starblade Chronicles, Aberrations and Brother Wulf.

John Nevil Maskelyne was an English stage magician and inventor of the pay toilet, along with other Victorian-era devices. He worked with magicians George Alfred Cooke and David Devant, and many of his illusions are still performed today. His book Sharps and Flats: A Complete Revelation of the Secrets of Cheating at Games of Chance and Skill is considered a classic overview of card sharp practices, and in 1914 he founded the Occult Committee, a group whose remit was to "investigate claims to supernatural power and to expose fraud".