Ugamak Island (Aleut : Ugangax̂ [1] ) is one of the Krenitzin Islands, a subgroup of the Fox Islands group of the eastern Aleutian Islands, Alaska. Ugamak is an Aleut word transcribed by Father Veniaminov (1840) which, according to R. H. Geoghegan, may mean "ceremony island". It is 5.9 miles (9.5 km) long and is located 32 miles (51 km) east of Akutan Island. Ugamak Bay is situated on the southeast coast of Ugamak, and Ugamak Strait is a three-mile-wide channel that separates Ugamak from Kaligagan Island [2] to the west. 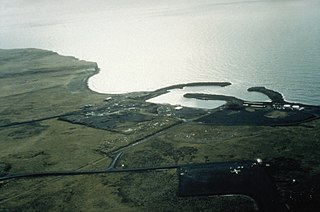 St. George is a city in Aleutians West Census Area, Alaska, United States. At the 2010 census the population was 102, down from 152 in 2000. It is the main settlement of St. George Island in the Pribilofs, a small island group in the Bering Sea.

Unimak Island is the largest island in the Aleutian Islands chain of the U.S. state of Alaska.

Amaknak Island or Umaknak Island is the most populated island in the Aleutian Islands, an archipelago which is part of the U.S. state of Alaska.

Amatignak Island is a member of the Delarof Islands, in Alaska's Aleutian archipelago. The southernmost point of Alaska is on this island, as well as the westernmost longitude of Alaska, the United States, and North America.

The Krenitzin Islands are a group of small islands located in the eastern portion of the Fox Islands group of the eastern Aleutian Islands, Alaska. The Krenitizins are situated between Unalaska Island to the southwest and Unimak Island to the northeast. Named islands in the Krenitzins group include Aiktak, Avatanak, Derbin, Kaligagan Island (Qisĝagan), Rootok (Aayux̂tax̂), Round, Tigalda, and Ugamak. All of these islands are managed as part of the Aleutian Islands Unit of the Alaska Maritime National Wildlife Refuge. The Krenitzins have a total land area of 61.596 sq.mi. (159.533 km²) and have no population.

Aiktak Island is one of the Krenitzin Islands, a subgroup of the Fox Islands in the eastern Aleutian Islands in the U.S. state of Alaska. It is 1.3 miles (2.1 km) long and is located 38 miles (61 km) east of Akutan Island. Aiktak is an Aleut name transcribed by Captain Tebenkov in 1852 as "Ostrov Aikhtak." R. H. Geoghegan suggested that the name is derived from the Aleut "aikhag", meaning "travel or going on a voyage." It is also known as Ashmiak.

Tigalda Island is one of the Krenitzin Islands, a subgroup of the Fox Islands in the eastern Aleutian Islands, Alaska. Tigalda is located about 19 miles (31 km) east of Akutan Island, is 12 miles (19 km) long and has an area of about 35 square miles (91 km2). Tigalda is an Aleut name published by Captain Lutke (1836). It was called "Kagalga" by Captain Lt. Krenitzin and Lt. Levashev (1768). Tigalda Bay is situated on the north side of Tigalda. Father Veniaminov (1840) reported the existence of an Aleut village, which he called "Tigaldinskoe", of 91 people in 1833. Tigalda is uninhabited.

Poa Island is an islet located about 0.99 miles (1.59 km) off the south coast of Akun Island in the Fox Islands group of the eastern Aleutian Islands, Alaska. The island is 0.62 miles (1.00 km) long and reaches a maximum elevation of about 200 feet (61 m) above sea level. It was named for a genus of grasses in 1888 by the U.S. Bureau of Fisheries. Captain Tebenkov (1852) called it "Ostrov Tumannyi," meaning "foggy island."

Samalga Island is the westernmost island in the Fox Islands group of the eastern Aleutian Islands, Alaska. It is 5.36 miles (8.63 km) long and is situated at the southwestern tip of Umnak Island. It has a land area of 1.589 square miles (4.12 km2) and is uninhabited. It is separated from the Islands of Four Mountains group to the west by the Samalga Pass. Samalga is the farthest point west on the Aleutian Island chain that still keeps the Alaska UTC−9 time zone. It is also the closest Alaskan island to Hawaii.

Kagalaska Island is an island in the Andreanof Islands of the Aleutian Islands of Alaska.

Chuginadak Island is the largest island in the Islands of Four Mountains subgroup of the Aleutian archipelago. Chuginadak is an Aleutian name published by Captain Tebenkov in an 1852 map. According to Knut Bergsland's Aleut Dictionary, the Aleutian word "chugida-lix" means "to fry, to make sizzle." The Western half of the island is called Chuginadax in Aleut, meaning 'simmering'.

Akun Island is one of the Fox Islands subgroup of the Aleutian Islands in the Aleutians East Borough of southwestern Alaska.

Carlisle Island is an island in the Islands of Four Mountains subgroup of the Aleutian archipelago. It is 1.9 miles (3.1 km) across the Carlisle Pass from Chuginadak Island and is 5.6 miles (9.0 km) northeast of Herbert Island. Carlisle Island has as diameter of 4.3 miles (6.9 km) and is dominated by the 5,280-foot (1,610 m) conical stratovolcano of the same name.

The Aleutian Islands, also called the Aleut Islands or Aleutic Islands and known before 1867 as the Catherine Archipelago, are a chain of 14 large volcanic islands and 55 smaller islands. Most of the Aleutian Islands belong to the U.S. state of Alaska, but some belong to the Russian federal subject of Kamchatka Krai. They form part of the Aleutian Arc in the Northern Pacific Ocean, occupying an area of 6,821 sq mi (17,666 km2) and extending about 1,200 mi (1,900 km) westward from the Alaska Peninsula toward the Kamchatka Peninsula in Russia, and act as a border between the Bering Sea to the north and the Pacific Ocean to the south. Crossing longitude 180°, at which point east and west longitude end, the archipelago contains both the westernmost part of the United States by longitude and the easternmost by longitude. The westernmost U.S. island in real terms, however, is Attu Island, west of which runs the International Date Line. While nearly all the archipelago is part of Alaska and is usually considered as being in the "Alaskan Bush", at the extreme western end, the small, geologically related Commander Islands belong to Russia.