Born as Park Gu-ma (박구마, 朴丘麻), Uhwudong was from was a noble family of the Joseon Dynasty. She married Yi Dong, prince Taegang (태강수 이동, 泰江守 李仝 [1] ), the great grandson of King Taejong. [2] She was forced to divorce him on account of adultery charges and subsequently she became an active poet, writer, artist, and dancer.

She was noted for her exceptional beauty, dancing, singing talent, poetry, quick wit and charm, and extraordinary intellect.

In 1480, she was put on trial for adultery. She was charged with having committed adultery with multiple male partners, including royal relatives, court officials and slaves. [3]

During this time period, the position of women deteriorated in Korea with the introduction of Confucian gender segregation, and there was an increasing severity in the persecution of women who committed adultery, and particularly noblewomen. Several such cases are known, such as those of Yu Gam-dong, who was sentenced to become a slave kisaeng, and Geumeumdong and Dongja, both noblewomen who were punished for having committed adultery with male relatives. Yi Gu-ji was also an example of committing adultery. The case of Uhwudong was however the perhaps most infamous of all, and became a famous scandal involving many men of high standing. The case ended with her conviction and execution. The death penalty for female adultery was formally introduced by king Jungjong of Joseon in 1513. [3]

Although only a handful of sijo (formatted verse used in Korea, as in English sonnet) and geomungo pieces exist today, they nonetheless show skilled craftsmanship of words and musical arrangement. These verses hint at the tragedy of her lost loves. Some are also responses to numerous famous classic Chinese poems and literature.

[玉淚丁東夜氣淸 / The beads flow and illuminate the night] [7]

玉淚丁東夜氣淸 / The beads flow like tears, illuminate the night

白雲高捲月分明 / The white clouds flow high, the moonlight is brighter.

間房叔謐餘香在 / Your scent remains in one small room.

可寫如今夢裏情 / I will be able to picture a dreamlike affection.

白馬臺空經幾歲 / How many years passed the house been empty?

千古興亡問可知 / I would have been able to find out about the rising and falling of long time.

Her personal life has become almost myth-like, having inspired novels, movies, TV series, operas, and numerous poets. After the destruction of the Joseon Dynasty in 1910, due to her renowned assertive and independent nature, she has become a modern popular cultural icon of Korea.

The Samjeondo Monument is a Manchu–Mongolian–Chinese trilingual monument marking the submission of the Korean Joseon dynasty to the Manchu-led Chinese Qing dynasty in 1636 after the latter's invasion of the former. Its original name was Daecheong Hwangje Gongdeok Bi (大淸皇帝功德碑), which means the stele to the merits and virtues of the Emperor of the Great Qing. Initially erected at Samjeondo, near the Sambatnaru crossing point of the Han River in modern-day Seoul, it was thereafter buried and erected again several times. It is designated as the 101st historic site of South Korea. 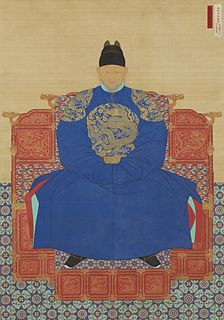 Taejo of Joseon, born Yi Seong-gye was the founder and first ruler of the Joseon Dynasty of Korea. After ascending to the throne, he changed his name to Yi Dan. He reigned from 1392 to 1398, and was the main figure in the overthrowing of the Goryeo Dynasty. Taejo joined the Goryeo army and rose through the ranks before finally seizing the throne in 1392. He abdicated in 1398 during a strife between his sons and died in 1408. 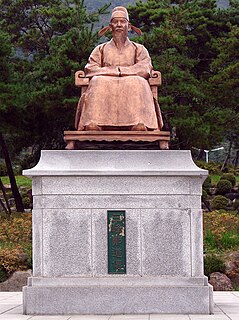 Jeong Dojeon, also known by his pen name Sambong, was a prominent Korean scholar-official during the late Goryeo to the early Joseon periods. He served as the first Chief State Councillor of Joseon, from 1392 until 1398 when he was killed by Yi Bang-won, the fifth son of Yi Seong-gye, the founder of the Joseon dynasty. Jeong Dojeon was an adviser to Yi Seong-gye and also the principal architect of the Joseon dynasty's policies, laying down the kingdom's ideological, institutional, and legal frameworks which would govern it for five centuries. 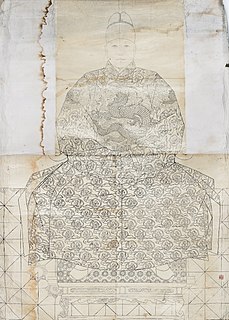 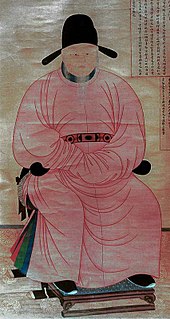 Yi Saek, also known by his pen name Mogeun, was a Korean writer and poet. His family belonged to the Hansan Yi clan. Yi Saek played a crucial role in the introduction and localisation of philosophy of Zhu Xi. He studied Neo-Confucianism in Yuan Dynasty China and opened an academy after his return to Goryeo, and from his academy the founders of Joseon Dynasty were educated.

Pak Paeng-nyeon was a scholar-official of the early Joseon Dynasty, and is known as one of the six martyred ministers. He was born to a yangban family of the Suncheon Park clan, and was the son of high minister Park Jeong-rim. He passed the lower national service examination at a royal visitation in 1434, and was later appointed to the Hall of Worthies by Sejong. In the 1440s, he participated with other members of the Hall of Worthies in the creation of the Hunminjeongeum and the creation of the Hangul alphabet. He passed the higher literary examination in 1447, and rose to vice-minister of justice under Danjong in 1454. He was an 8th cousin of Park Won-jong, the maternal uncle of Yun Im and Queen Janggyeong, the second wife of King Jungjong.

Shim On was a Korean politician. He was the Chief State Councillor of the Korean Joseon from September 1418 to December 1418 and the father of Queen Soheon and father-in-law to King Sejong. He is known for his treason charges, which eventually led to his death and further strengthening of the royal power.

Queen Soheon, of the Cheongsong Sim clan, was a posthumous name bestowed to the wife and queen consort of Yi Do, King Sejong and the mother of Yi Hyang, King Munjong and Yi Yu, King Sejo. She was Queen consort of Joseon from 1418 until her death in 1446 and honoured as Queen Gong (공비).

Han Myeong-hoe was a Korean politician and soldier during the Joseon period.

Queen Myeongseong of the Cheongpung Kim clan, was a posthumous name bestowed to the wife and queen consort of Yi Yeon, King Hyeonjong, the 18th Joseon monarch. She was Queen consort of Joseon from 1659 until her husband's death in 1674, after which she was honoured as Royal Queen Dowager Hyeonryeol (현렬왕대비).

Queen Uiin (의인왕후), of the Bannam Park clan, was a posthumous name bestowed to the wife and first queen consort of Yi Yeon, King Seonjo, the 14th Joseon monarch. She was Queen consort of Joseon from 1569 until her death in 1600.

Princess Yi Gu-ji was a Joseon Dynasty princess, writer, artist, and poet. She was forced to commit suicide after it was discovered that she had cohabited with a slave after being widowed.

Yu Gam-dong, was a notable Gisaeng, dancer, writer, artist, and poet who lived during the Korean Joseon Dynasty of the 15th century. Her Gisaeng name was Gamdong.

Queen Wongyeong of the Yeoheung Min clan, was the primary wife of Taejong of Joseon, and the mother of Sejong the Great.

Princess Uisun was a Joseon Royal Family member who became the adopted daughter of Hyojong of Joseon and Queen Inseon, so she could marry the Aisin Gioro prince Dorgon and later, prince Bolo.

Joseon Exorcist is a South Korean historical-supernatural television series. The series, directed by Shin Kyung-soo and written by Park Gye-ok, stars Jang Dong-yoon, Park Sung-hoon and Kam Woo-sung. The series follows the fight of the royal family to protect people from the evil spirits, who use human frailties to demolish Joseon. The first two episodes aired on SBS TV on March 22 and 23, 2021, at 22:00 (KST) before being canceled due to historical inaccuracies and Chinese props present in the series that resulted in the backlash from many Korean viewers.

Queen Danuin, was the first wife of Crown Prince Hwiso, the future Gyeongjong of Joseon. She died before her husband's ascension to the throne, but was posthumously honoured as Queen Danui.

Grand Princess Consort Seungpyeong was a Korean Joseon dynasty Royal Family member though her marriage with Grand Prince Wolsan, the oldest son of Deokjong of Joseon and Queen Sohye. She was the older sister of Park Won-jong and the maternal aunt of King Jungjong's second wife, Queen Janggyeong.

Yi Hwa (1348–1408) or formally called as Grand Prince Uian, was a warrior and scholar during the Later Goryeo dynasty, also the royal family member in the Early Joseon dynasty. He was the only son Yi Jachun and Gim Goeumga, also the half younger brother of Yi Seonggye.

The King of Tears, Lee Bang-won is an upcoming 2021 South Korean television series starring Joo Sang-wook in the titular role. With this series, KBS is reviving the historical drama series after 5 years, as the last KBS historical series Jang Yeong-sil was aired in 2016. The series which depicts the story of Yi Bang-won, the third king of Joseon from a new perspective, is scheduled to premiere on KBS1 from December 11, 2021 on Saturdays and Sundays at 21:40 (KST) for 32 episodes.