An ujigami (氏神) is a guardian god or spirit of a particular place in the Shinto religion of Japan.

The ujigami was prayed to for a number of reasons, including protection from sickness, success in endeavors, and good harvests. [1]

The ujigami is thought to have been believed in only since the eighth century. [2]

In its current form, the term ujigami is used to describe several other types of Shinto deities. Originally, the term ujigami referred to a family god. [3] It is believed that, at first, these deities were worshiped at temporary altars. [3] After the Heian period, the Japanese manorial system was established and nobles, warriors and temples had their own private land, the family-based society fell out of use, and belief in ujigami diminished. In turn, the lords of the manors began to pray to the deities to protect their land. These guardian deities were referred to as chinju (鎮守). In the Muromachi period the manorial system declined, and so the guardian deities were enshrined along with the ujigami. An ubusunagami (産土神) is a god of the land of one's birth. Over time, the ubusunagami and chinju came to be seen as the heart of the community, and were eventually referred to as ujigami. [4]

Kami are the spirits, phenomena or "holy powers" that are venerated in the religion of Shinto. They can be elements of the landscape, forces of nature, as well as beings and the qualities that these beings express; they can also be the spirits of venerated dead people. Many kami are considered the ancient ancestors of entire clans. Traditionally, great or sensational leaders like the Emperor could be or became kami. 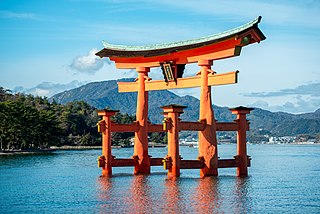 Shinto is a religion which originated in Japan. Classified as an East Asian religion by scholars of religion, its practitioners often regard it as Japan's indigenous religion and as a nature religion. Scholars sometimes call its practitioners Shintoists, although adherents rarely use that term themselves. There is no central authority in control of Shinto and much diversity exists among practitioners.

Amaterasu, also known as Amaterasu-Ōmikami or Ōhirume-no-Muchi-no-Kami (大日孁貴神) among other names, is the goddess of the sun in Japanese mythology. One of the major deities (kami) of Shinto, she is also portrayed in Japan's earliest literary texts, the Kojiki and the Nihon Shoki, as the ruler of the heavenly realm Takamagahara and the mythical ancestress of the Japanese imperial house via her grandson Ninigi. Along with her siblings, the moon deity Tsukuyomi and the impetuous storm god Susanoo, she is considered to be one of the "Three Precious Children", the three most important offspring of the creator god Izanagi.

In Japanese religion,Yahata formerly in Shinto and later commonly known as Hachiman is the syncretic divinity of archery and war, incorporating elements from both Shinto and Buddhism.

In Japanese religion, an ofuda is a talisman made out of various materials such as paper, wood, cloth or metal. Ofuda are commonly found in both Shinto shrines and Buddhist temples and are considered to be imbued with the power of the deities or Buddhist figures revered therein. Such amulets are also called gofu (護符).

Suijin is the Shinto god of water in Japanese mythology. The term Suijin refers to the heavenly and earthly manifestations of the benevolent Shinto divinity of water. It also refers to a wide variety of mythological and magical creatures found in lakes, ponds, springs, and wells, including serpents, and the flesh-eating kappa. Mizu no kamisama, Mizugami, or Suijin, is popularly revered and worshipped in temples and continues to influence Japanese culture. Suijin is also known as the water god, Suiten and Sui-ō/Suiu.

The chinjufu shōgun, also translated loosely as “commander-in-chief of the defense of the north”, was a military post in classical and feudal Japan. Under the command of the seii taishōgun, the chinjufu shōgun was primarily responsible for the pacification of the Ezo people of northern Honshū and Hokkaidō, and Japan's defense against them. 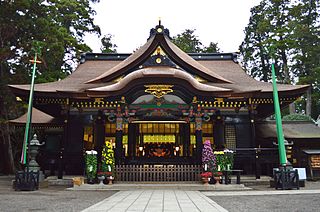 Futsunushi, also known as Iwainushi, is a warrior god in Japanese mythology. Also known under the epithet Katori Daimyōjin (香取大明神) after his shrine in northern Chiba Prefecture, Katori Jingū, he is often revered alongside Takemikazuchi, with whom he is closely associated. He is regarded as a legendary ancestor of the Mononobe clan, and like Takemikazuchi is one of the tutelary deities of the Fujiwara clan.

Ame-no-Minakanushi is a deity (kami) in Japanese mythology, portrayed in the Kojiki and the Nihon Shoki as the very first or one of the first deities that emerged after heaven and earth came into existence. 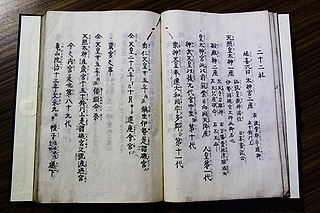 Yoshida Kanetomo was a Japanese Shinto priest of the Sengoku period. He was a seminal figure in the evolution of a coherent descriptive and interpretive schema of Shinto ritual and mythology.

John Lawrence Breen is a British academic and Japanologist. He is a specialist in Japanese history at the International Research Center for Japanese Studies in Kyoto. He writes in English and Japanese on the history of Shinto and the imperial institution.

Myōken, also known as Sonshō-Ō, is a Buddhist deity revered as the deification of the North Star. Worship of Myōken is mainly associated with the Nichiren, Shingon and Tendai schools of Japanese Buddhism. 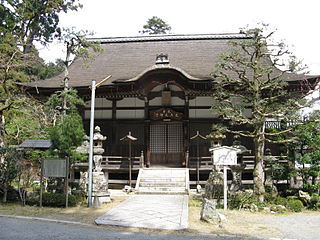 Yoshida Shintō (吉田神道) also frequently referred to as Yuiitsu Shintō was a prominent sect of Shintō that arose during the Sengoku period through the teachings and work of Yoshida Kanetomo. The sect was originally an effort to organize Shintō teachings into a coherent structure in order to assert its authority vis-a-vis Buddhism. However, by the Edo period, Yoshida Shintō continued to dominate the Shintō discourse, and influenced Neo-Confucian thinkers such as Hayashi Razan and Yamazaki Ansai in formulating a Neo-Confucian Shinto doctrine. Yoshida Shinto's dominance rivaled that of Ise Shintō.

The kuni-yuzuri (国譲り) "Transfer of the land" was a mythological event in Japanese prehistory, related in sources such as the Kojiki and the Nihon Shoki. It relates the story of how the rulership of Japan passed from the earthly kami (kunitsukami) to the kami of Heaven (amatsukami) and their eventual descendants, the Imperial House of Japan.