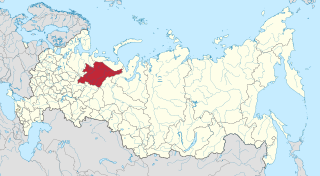 The Komi Republic, or Komi is a federal subject of Russia. Its capital is the city of Syktyvkar. The population of the republic, as of the 2010 Census was 901,189.

UTair Express was a Russian regional airline headquartered in Syktyvkar, Komi, and a subsidiary of UTair Aviation. Its main base was Syktyvkar Airport. It ceased operations on 10 June 2015.

Severstal Aircompany (Северсталь) is an airline with its head office on the property of Cherepovets Airport in Botovo village, Cherepovetsky District, Russia.

The Yamal–Europe natural gas pipeline is a 4,196 kilometres (2,607 mi) long pipeline connecting natural gas fields in Western Siberia and in the future on the Yamal peninsula, Russia, with Germany. 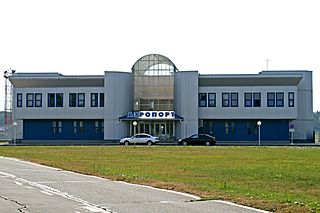 JSC Komiinteravia was an airline based in Syktyvkar, Komi Republic, Russia. It operated scheduled domestic passenger services, as well as passenger and cargo charter flights to domestic and international destinations. Its main base was Syktyvkar Airport.

Yamal project, also referred to as Yamal megaproject, is a long term plan to exploit and bring to the markets the vast natural gas reserves in the Yamal Peninsula, Russia. Administratively, the project is located in the Yamalo-Nenets Autonomous Okrug. The project is developed by Gazprom.

Northern Lights is a natural gas pipeline system in Russia and Belarus. It is one of the main pipelines supplying north-western Russia and is an important transit route for Russian gas to Europe.

Alrosa Flight 514 was a Tupolev Tu-154 passenger jet on a domestic scheduled flight from Udachny to Moscow, Russia, that on 7 September 2010 made a successful emergency landing at a remote airstrip after suffering an in-flight total electrical failure. All 81 people on board escaped unharmed.

Tulpar Air was based in Kazan (Tatarstan), Russia, and was established in late 2004 by absorbing the airline Atlas which specialized in helicopter transport. It has its own maintenance base in Kazan. In 2010 it was Russia's least punctual airline with 21% of flights delayed. Before bankruptcy, TAIF was the majority shareholder.

Ukhta is a town in the Komi Republic, Russia.

Komiavaiatrans is a regional airline from Russia, which operates mostly domestic regional flights from Komi Republic. Its headquarter located in Syktyvkar. 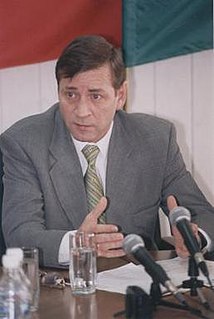 Vladimir Arkadyevich Petukhov was mayor of Nefteyugansk in 1996-1998. According to the investigative committee of the Russian Federation, he was killed by order of the first vice-president of the oil company YUKOS, Leonid Nevzlin, due to conflict due over the failure of YUKOS to pay taxes to the local budget. The Moscow City Court found that the organizer of the crime was the security officer of YUKOS Alexey Pichugin.