The lake is fed by canals derived from Noyyal river. The lake also receives water from Selvachinthamani lake located upstream in the north and drain water. The lake has an outlet connecting it with Valankulam lake. The water can be released through four sluice gates located on the south side of the lake. [1]

As per a study conducted in 2003–04, the lake had 36 genera of zooplankton including of 8 genera of protozoa and 6 genera of Rotifera with increased eutrophication of the lake. Species Diversity Index of zooplankton population ranged from 1.74 to 3.63 across the year with maximum before the beginning of the summer and end of South-west monsoon.[ citation needed ]

As per a study on bird diversity conducted in 2013, about 48 species of avifauna belonging to 20 families were recorded. Most species were recorded in March before the start of summer and was the least in the winter months of November and December. Highest bird population was observed in the months of January and February. [3] Various birds including little grebes, painted storks and purple moorhen can be spotted in this lake. [4]

Fishing is carried out by local fishermen and enthusiasts. In the 2000s, due to encroachment and the fishes were infected with metals and pathogens from polluted waste water discharged from the sewage. [1] The local fishermen requested the lake to be cleaned up to ensure healthy fish population. [5]

The lake became contaminated with effluents from sewage release from the city and was encroached by water hyacinth. In 2010, Coimbatore Corporation unveiled a plan to De-silt the lake and clear the encroachments. The corporation hired external consultants and suggested public-private-partnership model for the development of the lake. [2] In 2013, the de-silting was carried out by the Coimbatore Corporation in association with NGO Siruthuli, Residents Awareness Association of Coimbatore and Vijayalakshmi Charitable Trust. The restoration of the lake was funded partly by the government and partly by private corporations and the activity was carried out with the help of volunteers from public. [5]

In 2015, the Coimbatore corporation announced a beautification project at the cost ₹49.5 million (US$690,000). The civic body planned to lay a 1.2 km (0.75 mi) stretch of road exclusively for two-wheelers and beautify the tank bund by installing solar powered lamps and steel fences. [6] The road was inaugurated on June 8, 2015 by the Chief Minister of Tamil Nadu and helped ease traffic congestion in Ukkadam area. [7] It is also known as Marine drive of coimbatore 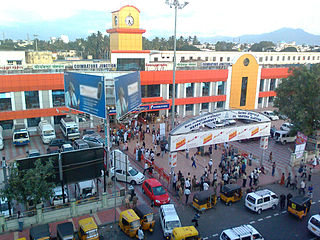 Coimbatore, also known as Kovai or sometimes spelt as Covai, is a city in the Indian state of Tamil Nadu. It is located on the banks of the Noyyal River and surrounded by the Western Ghats. Coimbatore is the second largest city in Tamil Nadu after Chennai and 32nd largest in India. It is the 16th largest urban agglomeration in India as per the census 2011. It is administered by the Coimbatore Municipal Corporation and is the administrative capital of Coimbatore district.

Pulicat Lagoon is the second largest brackish water lagoon in India, after Chilika Lake. Pulicat Lagoon is considered to be the second largest brackish water body in India measuring 759 square kilometres (293 sq mi). The lagoon is one of the three important wetlands to attract northeast monsoon rain clouds during the October to December season in the Tirupati Region. The lagoon comprises the following regions, which adds up 759 square kilometres (293 sq mi) according to Andhra Pradesh Forest Department: 1) Pulicat Lake 2) Marshy/Wetland Land Region (AP) 3) Venadu Reserve Forest (AP) 4) Pernadu Reserve Forest (AP) The lagoon was cut across in the middle by the Sriharikota Link Road, which divided the water body into lagoon and marshy land. The lagoon encompasses the Pulicat Lake Bird Sanctuary. The barrier island of Sriharikota separates the lagoon from the Bay of Bengal and is home to the Satish Dhawan Space Centre. Major part of the lagoon comes under Nellore district of Andhra Pradesh.

Coimbatore district is one of the 38 districts in the Indian state of Tamil Nadu. Coimbatore is the administrative headquarters of the district. It is one of the most industrialized districts and a major textile, industrial, commercial, educational, information technology, healthcare and manufacturing hub of Tamil Nadu. The region is bounded by Tiruppur district in the east, Nilgiris district in the north, Erode district in the north-east, Palakkad district, Idukki district and small parts of Thrissur district and Ernakulam district of neighboring state of Kerala in the west and south respectively. As of 2011, Coimbatore district had a population of 3,458,045 with a sex-ratio of 1,000 and literacy rate of 84%.

Siruthuli is an NGO based in Coimbatore, India which works to rejuvenate the water sources in the city of Coimbatore. Siruthuli means a small drop in Tamil.

Tholkappia Poonga or Adyar Eco Park is an ecological park set up by the Government of Tamil Nadu in the Adyar estuary area of Chennai, India. According to the government, the project, conceived based on the master plan for the restoration of the vegetation of the freshwater ecosystems of the Coromandel Coast, especially the fragile ecosystem of the Adyar estuary and creek, was expected to cost around ₹ 1,000 million which will include the beautification of 358 acres of land. The park's ecosystem consists of tropical dense evergreen forest, predominantly comprising trees and shrubs that have thick dark green foliage throughout the year, with over 160 woody species, and comprises six vegetative elements such as trees, shrubs, lianas, epiphytes, herbs and tuberous species. The park was opened to public by Chief Minister M. Karunanidhi on 22 January 2011 and named after the renowned Tamil scholar Tholkappiar. About 65 percent of the park is covered by water and artefacts and signages. In the first 2 months of its inauguration, nearly 4,000 children from several schools in the city and the nearby Kancheepuram and Tiruvallur districts have visited the park to learn about wetland conservation, eco-restoration and water management. While the first phase of the ecopark covered about 4.16 acres of CRZ-III area, the entire area covered under the second phase falls under this category.

Velachery aeri, or Velachery lake, is one of the lakes inside Chennai, in the Indian state of Tamil Nadu, with a good stock of water all through the year. Since Velachery is a low-lying area, the monsoon rain water from the neighbouring areas are drained into this lake. CHENNAI: In an unexpected turn of events, the Chennai Corporation has decided to put on hold the proposal for boat rides and other tourist facilities on the Velachery lake, one of the few water bodies still alive in the city. The reason it has cited is the high level of contamination of the water.

Lakes in Bangalore, Karnataka are numerous, and there are no rivers close by. Most lakes in the Bangalore region were constructed in the sixteenth century by damming the natural valley systems by constructing bunds.

Kodaikanal Lake, also known as Kodai Lake is a manmade lake located in the Kodaikanal city in Dindigul district in Tamil Nadu, India. Sir Vere Henry Levinge, the then Collector of Madurai, was instrumental in creating the lake in 1863, amidst the Kodaikanal town which was developed by the British and early missionaries from USA. The lake is said to be Kodaikanal's most popular geographic landmark and tourist attraction. 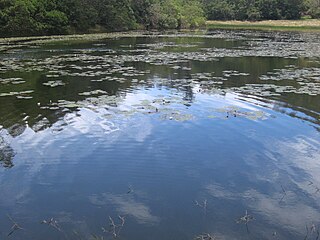 Berijam Lake is a reservoir near Kodaikanal town in Dindigul district of Tamil Nadu, South India. It is at the old site of "Fort Hamilton", in the upper Palani hills. The lake, created by a dam with sluice outlets, is part of a micro–watershed development project. Periyakulam town, 18.7 kilometres (11.6 mi) to the SE, gets its public drinking water from the lake. The lake's water quality is excellent.

The Adyar or Adayar, originating near the Chembarambakkam Lake in Kanchipuram district, is one of the three rivers which winds through Chennai (Madras), Tamil Nadu, India, and joins the Bay of Bengal at the Adyar estuary. The 42.5-kilometre (26.4 mi) long river contributes to the estuarine ecosystem of Chennai. Despite the high pollution levels, boating and fishing take place in this river. The river collects surplus water from about 200 tanks and lakes, small streams and the rainwater drains in the city, with a combined catchment area of 860 square kilometres (331 sq mi). Most of the waste from the city is drained into this river and the Cooum. 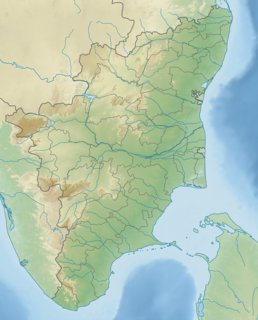 Ramnadi is a river in Pune District and is a tributary of Mula. It originates in the Sahyadris near Kathpewadi, north-west of Pune city. The river flows through the Bhugaon, Bhukum, Bavdhan, Pashan, Baner and Aundh areas of Pune city. It is defined as a brook by the Pune Municipal Corporation (PMC). 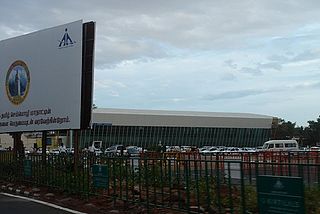 Coimbatore has a well-developed transport infrastructure. The city and its suburbs is traversed using its road networks. Coimbatore is well connected by Road, Rail and Air with most cities and towns in India except through waterways. The city has fairly better transport infrastructure, though road infrastructures are not well maintained and developed according to the growing needs of transport, making traffic congestion a major problem in the city. A comprehensive transport development plan is made part of Coimbatore Masterplan as part to ease many of traffic problems. 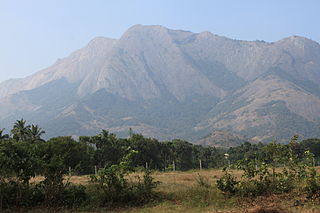 Coimbatore is the second largest city in the Indian state of Tamil Nadu. It is situated in the western corner of Tamil Nadu, a short distance from the border with the neighbouring state of Kerala, and is surrounded by the Western Ghats on all sides.

Coimbatore or Kovai is a major city in the Indian state of Tamil Nadu. It is the second largest city and urban agglomeration in the state after Chennai and the sixteenth largest urban agglomeration in India. It is administered by the Coimbatore Municipal Corporation and is the administrative capital of Coimbatore district. It is one of the fastest growing tier-II cities in India and a major textile, industrial, commercial, educational, information technology, healthcare and manufacturing hub of Tamil Nadu. It is often referred to as the "Manchester of South India" due to its cotton production and textile industries.

Coimbatore Metro is also known as Kovai Metro is a proposed metrorail system for the city of Coimbatore, Kovai metropolitan area, Tamil Nadu. It has been converted into Coimbatore metro from Coimbatore Monorail.

Mookaneri lake is a lake spread over 58 acres in Kannankurichi, Salem, Tamil Nadu, India. It is located at the foot of the Shevaroy Hills, a major water body of the Salem city, source of Water for the Mookaneri Lake, has been from rainfall received in the Yercaud hill station. The rain water from the hills will reach the Puthu Yeri. The surplus water of Puthu Yeri reached Mookaneri Lake through the Kothukaran Odai.