Suurhusen is a village north of Emden in the German region of East Frisia. It has about 1200 inhabitants and is administered by the municipality of Hinte. The steeple of the Suurhusen church, inclined at an angle of 5.19 degrees, is the most leaning tower of the world, beating the world-famous Leaning Tower of Pisa by 1.22 degrees. 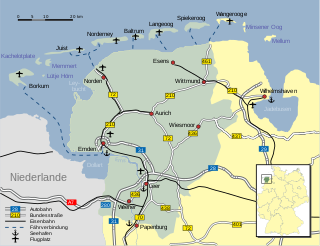 East Frisia or Eastern Friesland is a coastal region in the northwest of the German federal state of Lower Saxony. It is the middle section of Frisia between West Frisia in the Netherlands and North Frisia in Schleswig-Holstein.

Moormerland is a municipality in the Leer District, in Lower Saxony, northwestern Germany.

Focko Ukena was an East Frisian chieftain (hovetling) who played an important part in the struggle between the Vetkopers and Schieringers in the provinces of Groningen and Friesland. Aside from this he was one of the leading figures in the resistance against the forts of stately authority in East-Frisia of the tom Brok family.

In 1424 Uko acquired together with Udo Poppinga the farm tor Brake (also spelled to Brahe / Brae) in the Emsland region from the Squire Ecerd von der Bele. [1] His brother-in-law Ocko II tom Brok (Ocko to Broke), chief of the Brokmerland asked the abbot of Werden, in a letter dated 17 September 1424, to enfeoff Uko with this farm and confirmed that Uko was by birth a free man, honest and genuine, with four free-born grandparents. [2]

Ocko II tom Brok (1407–1435) was Chieftain of the Brokmerland and the Auricherland in East Frisia.

Between 1425 and 1427 Uko married Hebe (or Heba) of Dornum, a daughter of Lütet Attena of Dornum and Nesse and Ocka tom Brok, a daughter of Ocko I tom Brok. Documentary evidence exists that the heiress of this marriage was Theda Ukena (born: before 1432; died 17 September 1494), who married in 1455 Ulrich I Cirksena who was stadtholder of East Frisia and became the first Count of East Frisia in 1464.

Lütet Attena was a 14th-century East Frisian chieftain of Dornum and Nesse in the Norderland area. 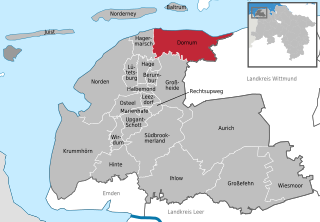 Dornum is a village and a municipality in the East Frisian district of Aurich, in Lower Saxony, Germany. It is situated near the North Sea coast, approx. 15 km east of Norden, and 20 km north of Aurich.

Ocko I tom Brok followed his father Keno I tom Brok as chieftain of the Brokmerland and the Auricherland in East Frisia, a former territory on Germany's North Sea coast.

In 1424 Uko and his father opposed the tom Brok family of East Frisian chieftains, who had transferred the village and castle of Oldersum to them in 1413. Ocko II tom Brok demanded from Focko the return of the castle and won a court case to that effect in the city of Groningen dated 6 June 1426. [3] Focko rejected this decision and defeated Ocko in the Battle of Detern on 27 September 1426 and in the Battle of the Wild Fields on 28 October 1427. Thus, Focko Ukena became a pioneer of the principle of Frisian freedom.

The tom Brok family were a powerful East Frisian line of chieftains, originally from the Norderland on the North Sea coast of Germany. From the second half of the 14th century, the tom Broks tried to gain control of East Frisia over the other chieftain families. The line of tom Brok died out in 1435.

The Battle of Detern on 27 September 1426 marked the prelude to the East Frisian rebellion against the rule of the tom Brok family over East Frisia. 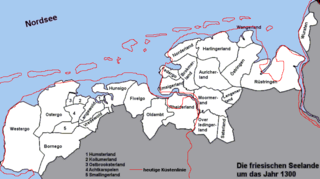 Friese freedom or freedom of the Frisians was the absence of feudalism and serfdom in Frisia, the area that was originally inhabited by the Frisians. Historical Frisia included the modern provinces of Friesland and Groningen, and the area of West Friesland, in the Netherlands, and East Friesland in Germany. During the period of Frisian freedom the area did not have a sovereign lord who owned and administered the land. The freedom of the Frisians developed in the context of ongoing disputes over the rights of local nobility.

In 1430, Uko was besieged in his Oldersum castle by a group of Frisian chieftains who had joined forces under the leadership of the Cirksena family and who opposed Ukena's Lordship. On 2 November 1430, Uko gave up his claim, in a treaty with the besiegers. He was able, however, to retain the right to live in the castle, based on a legal claim his wife held as granddaughter of Ocko I tom Brok. [5] Uko lived in the castle until his death in 1432.

His father had fled to Münster after his castle at Leer had fallen. Father Focko had not given up the power struggle and he invited his son Uko to Groothusen to meet his ally Imel Allena. On the way to there, Uko was attacked and slain in a reed land between Marienwehr und Suurhusen. He was buried in the church of the Franciscan monastery in Emden. His daughter Theda Ukena ordered an effigy tomb stone to be put on his grave. [6] [7] The church and the monastery were destroyed by a fire on 21 July 1938. 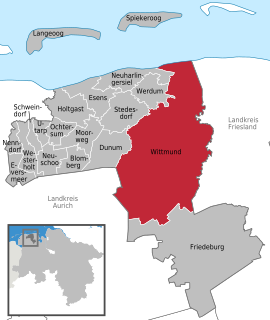 Wittmund is a town and capital of the district of Wittmund, in Lower Saxony, Germany. 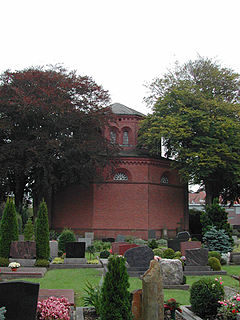 The history of East Frisia developed rather independently from the rest of Germany because the region was relatively isolated for centuries by large stretches of bog to the south, while at the same time its people were oriented towards the sea. Thus in East Frisia in the Middle Ages there was little feudalism, instead a system of fellowship under the so-called Friesian Freedom emerged. It was not until 1464, that the House of Cirksena was enfeoffed with the Imperial County of East Frisia. Nevertheless absolutism had been, and continued to be, unknown in East Frisia. In the two centuries after about 1500, the influence of the Netherlands is discernable - politically, economically and culturally. In 1744, the county lost its independence within the Holy Roman Empire and became part of Prussia. Following the Vienna Congress of 1815, it was transferred to the Kingdom of Hanover, in 1866 it went back to Prussia and, from 1946, it has been part of the German state of Lower Saxony.

The Emsigerland—sometimes Emderland—was a historic region, situated on the western edge of East Frisia by the Wadden Sea, which covered a wide area around the town of Emden. The Emsigerland borders in the north on the Federgau, in the northeast on the Brokmerland in the east on the Moormerland and in the south on the Rheiderland.

Enno Edzardisna was a chieftain of Norden, Greetsiel, Berum and Pilsum in East Frisia. He was the son of the chieftain Edzard II of Appingen-Greetsiel and his wife Doda tom Brok. Enno was a pioneer of the claim of the house Cirksena to the rule over all of East Frisia, which his son finally Ulrich I formally achieved when he was made an Imperial Count in 1464. 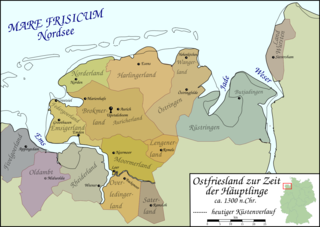 The East Frisian chieftains assumed positions of power in East Frisia during the course of the 14th century, after the force of the old, egalitarian constitution from the time of Frisian Freedom had markedly waned. 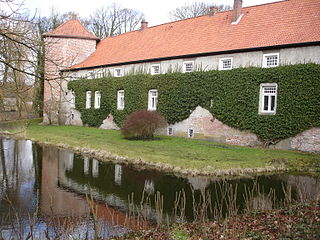 Berum Castle is located in the Berum district the East Frisian town of Hage in Germany. It is one of the most important sites in East Frisian history.

The Brokmerbrief or Law of Brokmerland is the early 13th-century law code of the brocmanni, the inhabitants of Brokmerland, west of Aurich in East Frisia. The area had been placed under cultivation and settled by the end of the 12th century. It survives in two manuscripts. The work is sometimes referred to as the Brookmerbrief, using the modern spelling of "Brookmerland".