Ukraine Is Not a Brothel

Ukraine Is Not a Brothel is a 2013 Australian documentary film directed by Kitty Green. The film debuted at the 70th Venice International Film Festival, although it was not part of the competition. [1] The documentary concerns the FEMEN (Фемен) movement, a feminist protest group originating from Ukraine. [2]

The film is a documentary on the activities of FEMEN, a Ukrainian feminist movement known for topless protests. The filmmaker Kitty Green [3] [4] followed the activists for over a year, in Ukraine, Belarus and Turkey. [5] It documents the protests and the resulting harassments and arrests [6] over a span of fourteen months. [7] The film showcases the four activists who form the core of the film. [8]

The documentary shows Viktor Sviatsky as a driving force of the group FEMEN. He is the manipulator of all the protests and, in essence, commander of the females. [1] [6] [9] [10] [11]

The activists of FEMEN participated in the promotion of the documentary. They claimed that the situation in the film, i.e. under the leadership of Viktor Sviatsky, is actually part of the past, since he was ejected from the movement in 2012. [1] [12]

The film was screened out of competition at the 70th Venice International Film Festival of Venice. [1] At the festival photocall the activists appeared topless, as is usual for their protests [13]

Glenn Dunks [14] and Christopher Schobert of The Playlist on IndieWire [15] gave the film positive reviews.

On 9 September 2014, Ukraine is Not a Brothel won for the Best Feature Length Documentary by Australian Academy of Cinema and Television Arts, awarded at the 4th AACTA Awards at The Star Event Centre, Sydney, New South Wales in late January 2015 [16]

Human rights in Ukraine is a highly contested topic and in 2018 Ukraine was labeled as "Partly Free" by organizations such as Freedom House.

Inna Hermanivna Bohoslovska is a Ukrainian politician. Bohoslovska was a candidate for President of Ukraine in the 2010 Ukrainian presidential elections. 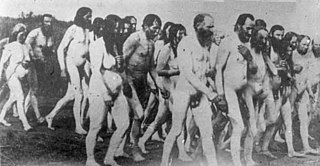 Nudity is sometimes used as a tactic during a protest to attract media and public attention to a cause, and sometimes promotion of public nudity is itself the objective of a nude protest. The use of the tactic goes back to well published photos of nude protests by svobodniki in Canada in 1903. The tactic has been used by other groups later in the century, especially after the 1960s. Like public nudity in general, the cultural and legal acceptance of nudity as a tactic in protest also varies around the world. Some opponents of any public nudity claim that it is indecent, especially when it can be viewed by children; while others argue that it is a legitimate form of expression covered by the right to free speech. 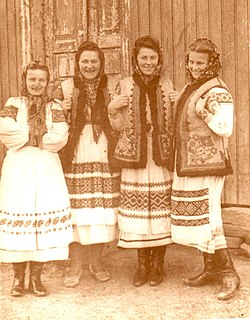 Women in Ukraine have equal constitutional rights as men in the economic, political, cultural and social fields, as well as in the family. Women receive lower salaries and have limited opportunity for career advancement. 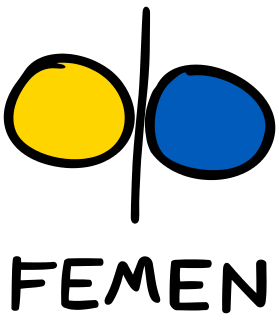 Femen is a radical feminist activist group whose goal is to protect women's rights. The organization became internationally known for organizing controversial topless protests against sex tourism, religious institutions, sexism, homophobia, and other social, national, and international topics. Founded in Ukraine, the group is now based in France. Femen describes its ideology as being "sextremism, atheism and feminism".

Anna Hutsol is a Ukrainian activist and one of the founders of the radical feminist activist group FEMEN. 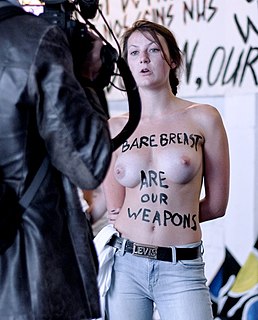 FEMEN France is the French branch of FEMEN, a feminist protest group founded in Ukraine in 2008 and famous for organizing topless protests. In October 2013 FEMEN had its largest membership in France. As of early January 2013, the organization consisted of 30 local activists. The only Ukrainians regularly present were Oksana Shachko and Inna Shevchenko. 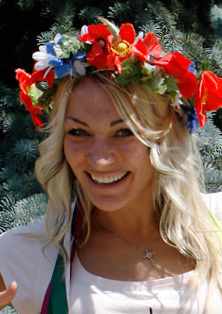 Inna Shevchenko is a Ukrainian feminist activist and the leader of international women's movement FEMEN, which often demonstrates topless against what they perceive as manifestations of patriarchy, especially dictatorship, religion, and the sex industry. Shevchenko has a higher profile than the other members of the group. She was the leader of the three FEMEN activists reputedly kidnapped and threatened by the Belarus KGB in 2011. She achieved attention in Ukraine by cutting with a chainsaw and then bringing down a 4-metre high Christian cross in central Kyiv in 2012. 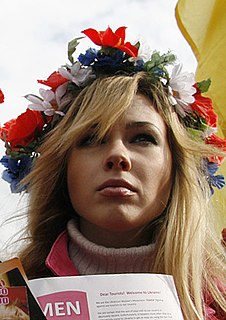 Olexandra Shevchenko is a member of the Ukrainian radical feminist protest group FEMEN, which regularly demonstrates topless against manifestations of patriarchy, dictatorship, religion, and the sex industry.

Oksana Shachko was a Ukrainian artist and activist. Along with Anna Hutsol and Alexandra Shevchenko, she was one of the founders of the radical feminist activist group Femen, which publicly demonstrates in various countries against sexual exploitation, income inequality, and policies of the Roman Catholic Church, among other causes. 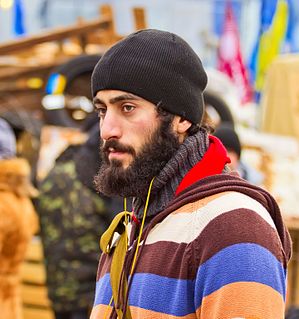 Serhiy Gagikovych Nigoyan or Nihoyan was an Armenian-Ukrainian Euromaidan activist who was fatally shot during the 2014 Hrushevskoho Street riots where he was acting as security. He was the first protester killed by shooting during the protest.

Amina Tyler is a Tunisian student, women's rights activist, and a former member of the feminist group Femen.

Milène Larsson is a Swedish journalist, producer, and managing editor of Vice magazine. 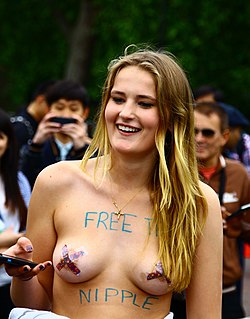 Free the Nipple is a topfreedom campaign created in 2012 during pre-production of a 2014 film of the same name. The campaign highlights the general convention of allowing men to appear topless in public while considering it sexual or indecent for women to do the same, and asserts that this difference is an unjust treatment of women. The campaign argues that it should be legally and culturally acceptable for women to bare their nipples in public. 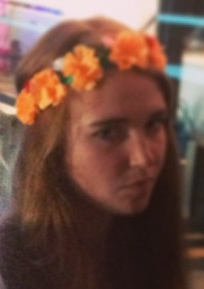 Josephine Witt is a German activist and former member of the feminist group FEMEN.

Iana (Yana) Zhdanova is a Ukrainian feminist and social activist who since the 2000s has been a leading member of the radical feminist protest group FEMEN. The movement became known for organizing controversial bare-breasted protests against inequality between men and women, prostitution, sex industry, dictatorship, homophobia and other political and social issues. 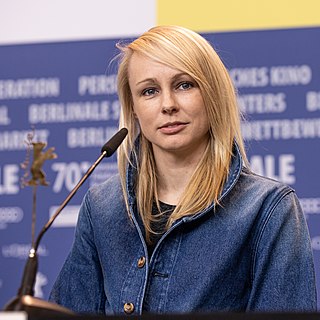 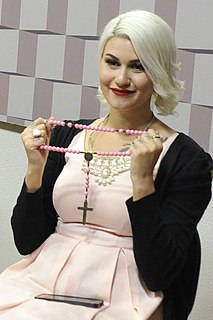 Sara Fernanda Giromini, known as Sara Winter, is a Brazilian activist and politician. She was the founder of the Brazilian variant of the Femen group, but after the second half of 2013 she worked in her own group, BastardXs. As of 2015, she joined the "Pro-Woman group", at the same time that she started to fight against the agendas she once defended, including the social construction of genders, feminism and the legalization of abortion, defending since then political positions linked to the right and conservatism.