The Ukrainian Riding Horse (Ukrainian : украї́нський верхови́й кінь) or Ukrainian Saddle Horse is a modern Ukrainian breed of warmblood sport horse. Breeding began in the years after the Second World War at the stud farm of Dnipropetrovsk in central Ukraine – at that time in the USSR – and later expanded to three other state stud farms. It derives from cross-breeding of Hanoverian, Thoroughbred and Trakehner stallions with local mares or with Hungarian Furioso, Gidran Arab or Nonius mares. It incorporates the last bloodlines of the extinct Orlov-Rostopchin or Russian Saddle Horse. [5] :115 It was bred to compete in show jumping, three-day eventing and dressage, but is also suitable as a general riding horse. [6] :250

Breeding of the Ukrainian Saddle Horse began in the years after the Second World War at the stud farm of Dnipropetrovsk, in Dnipropetrovsk Oblast in central Ukraine, which at that time was part of the Soviet Union. [3] :309 Breeding was based principally on cross-breeding of Hanoverian, Thoroughbred and Trakehner stallions with mares of local or of Hungarian Furioso, Gidran Arab or Nonius stock, but also incorporated the last bloodlines of the extinct Orlov-Rostopchin or Russian Saddle Horse. [5] :115

Breeding expanded to three other state stud farms: the Oleksandriysky stud at Likarivka  [ uk ] in Oleksandriia Raion of Kirovohrad Oblast in central Ukraine: the Provalsky stud at Provallya  [ uk ] in Sverdlovsk Raion of Luhansk Oblast in the easternmost part of Ukraine; and the Skadovsky stud at Bilozerka in Kherson Oblast in the south of the country. When these were closed, breeding continued at Dnipropetrovsk, and some horses were moved to the historic Derkulsky Stud  [ uk ] at Danilivka  [ uk ], in Bilovodsk Raion of Luhansk Oblast, and to the Yagilnytsky Stud  [ uk ] at Yahilnytsia in Chortkiv Raion of Ternopil Oblast in the western part of the country. From 1975 breeding was also carried out at the Lozivsky stud farm at Kinne  [ uk ], in Lozivsky Raion of Kharkiv Oblast in eastern Ukraine. [7]

There are seven lines within the breed, of which the Bespechny is closest to the extinct Orlov-Rostopchin breed. [7] [6] :250

A stud-book was begun in 1971. [2] The breed received the official approval of the State Committee for Food and Procurement of the Council of Ministers of the USSR in 1990, [7] not long before the break-up of the Soviet Union and the independence of Ukraine.

In 2004 there were 1393 horses registered, distributed among 5 state stud farms and 20 breeders in 13 of the oblasts of Ukraine; of these, 84 were stallions. This represented about 23% of the total purebred horse population of the country, and was slightly lower than the numbers of the Russian Trotter, the most numerous breed. [8] :31

The Ukrainian Riding Horse is muscular and solidly built, with high withers, a broad deep chest, a long straight back, a long sloping croup and strong legs well set on. The head is well proportioned, with a straight profile. [3] :310 [6] :250

The Ukrainian Riding Horse has been bred to compete in show jumping, three-day eventing and dressage. It is also suitable as a general riding horse. [6] :250

The Irish Sport Horse, or Irish Hunter, is an Irish breed of warmblood sporting horse, used mostly for dressage, eventing and show-jumping. It was bred from 1923 by cross-breeding of Irish Draught and Thoroughbred stock. There was some limited intromission of Hanoverian, Selle Français and Trakehner blood in the 1990s. It is a recognised true breed – foals may only be registered in the main section of the stud-book if both parents are registered in that section.

The Tersk or Tersky is a Russian breed of light riding horse of Arab type. It was bred at the Tersk Stud in Stavropol Krai in the North Caucasus between about 1925 and 1940. 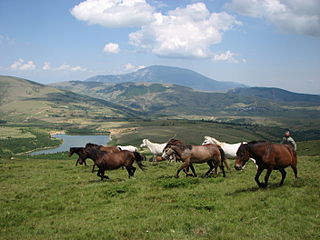 The Albanian is the only indigenous horse breed in Albania. It is a small horse, and similar to other Balkan horses. Two types are distinguished, a mountain type and a lowland type, which may be called "Myzeqeja" after the lowland Myzeqeja region.

The Hungarian Sport Horse, Hungarian: 'Magyar sportló', is a modern Hungarian breed of sporting horse. Like the Furioso-North Star, the Gidran, and the Nonius, it was created at the Hungarian State Stud at Mezőhegyes, in Békés county in the Southern Great Plain region of south-eastern Hungary. At the end of 2012, the total number for the breed was reported to be 1091. The breeders' association is the Magyar Sportlótenyésztők Országos Egyesülete, or Association of Hungarian Sporthorse Breeders.

The Latvian Horse is a purpose-bred warmblood horse breed from Latvia. Breeding began in Latvia in the early twentieth century, and a herd book was established in 1927. The breed was officially recognised in 1952. There are two types, sometimes called the Latvian Harness Horse and the Latvian Riding Horse. The harness type was predominant until about 1960, when demand for sport horses increased and more of the saddle type were bred.

The Vladimir Heavy Draft is a Russian breed of heavy draught horse. It was bred in the early twentieth century in farms and collectives in Ivanovo Oblast and Vladimir Oblast, to the east of Moscow. The most important influence on the development of the breed was from three Clydesdale stallions foaled between 1910 and 1923. The Vladimir was officially recognised in 1946.

The East Bulgarian is a Bulgarian breed of warmblood horse. It developed from the warmblood section established in about 1894, at the Kabiuk State Stud and Stallion Depot in Shumen Province in eastern Bulgaria. A stud-book was started in either 1951 or 1959. 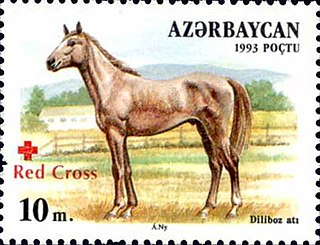 The Deliboz is an Azerbaijani breed of light riding horse. It is an ancient breed which underwent selective breeding in the Azerbaijan Soviet Socialist Republic in the twentieth century. It is one of four extant horse breeds in Azerbaijan, the others being the Karabakh, the Guba and the Shirvan. It may also be called Daliboz or Dilbaz. 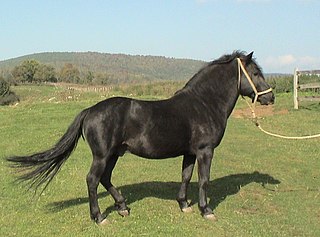 The Bosnian Mountain Horse is the only indigenous breed of domestic horse in Bosnia and Herzegovina, where it constitutes about 70% of the horse population. It is a small horse and is used both as a pack animal and for riding. Breed numbers were severely reduced during the Bosnian War of 1992–1995, and, unlike populations of other farm animals, continued to fall after the end of the war.

The Russian Draft or Russian Heavy Draft is a Russian breed of draft horse. It was bred in Imperial Russia in the second half of the nineteenth century, and until after the Russian Revolution was known as the Russian Ardennes. It is one of a number of draft breeds developed there at approximately the same time, others being the Lithuanian Heavy Draft, the Soviet Heavy Draft and the Vladimir Heavy Draft; it is both the oldest and the smallest of them. The present name dates from the Soviet era, and was used from 1952.

The Nonius is a Hungarian horse breed named after its Anglo-Norman foundation sire. Generally dark in color, it is a muscular and heavy-boned breed, similar in type to other light draft and driving horses. The breed was developed at the Imperial Stud at Mezőhegyes, Hungary by careful linebreeding. Originally bred to serve as a light draft and utility horse for Hungary's military, the breed became a useful agricultural horse during the 20th century. The depredations of World War II significantly reduced the Nonius' population, and in the decades after the war, a downturn in the usage of horses in Hungary sent many members of the breed to slaughter. Today the breed is bred by preservationists and is used in agriculture, leisure riding, and competitive driving sports. The largest numbers of Nonius horses are still found at Mezőhegyes, with representatives in other eastern European nations as well.

An Austrian Warmblood is a warmblood type of horse registered with the Arbeitsgemeinschaft für Warmblutzucht in Österreich. Although the studbook is made up of jumping and dressage horses from many other countries, the mare base consists of native horses with a long history. The AWÖ keeps an open studbook, in which mares and stallions must pass rigorous inspections before becoming breeding stock. 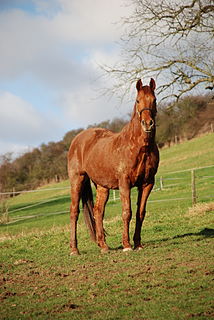 The Rhenish Warmblood, German: Rheinisches Warmblut or Rheinisches Reitpferd, is a German warmblood breed of sport horse. It was registered with the Rheinisches Pferdestammbuch until 2014, when the Hannoveraner Verband took over management of the stud-book. It is traditionally bred around Warendorf State Stud, which it shares with the Westphalian, and is bred to the same standard as the Westphalian and other German warmbloods, such as the Bavarian Warmblood, Mecklenburger, Brandenburger, and Württemberger.

The Gidran, Gidrán, or Hungarian Anglo-Arab is a horse breed developed in Hungary from bloodstock that included the Arabian horse. All members of the breed are Chestnut. It is an endangered breed today, with only about 200 living representatives worldwide.

The Romanian Sport Horse or Romanian Saddle Horse, Romanian: Cal de sport romanesc, is a Romanian breed of light riding horse. It was bred from 1962 from a variety of other breeds including Arab, Furioso-North Star, Gidran, Romanian Trotter and Thoroughbred. It is used as a carriage horse, for riding, for showing and as a sport horse. It is well-suited to show-jumping.

The Shan Horse or Shan Myinn is a breed of small mountain horse or pony from the Shan Highland, in Shan State in eastern Myanmar (Burma). It was traditionally bred by the Shan people of that area. It is one of two horse breeds in Myanmar, the other being the Burmese Horse. It is similar to the Indian Manipuri, Spiti and Bhutia breeds of small horse or pony.

The Zangersheide is a Belgian breed or stud-book of warmblood sport horses. It is one of three Belgian warmblood breeds or stud-books, the others being the Belgian Sport Horse and the Belgian Warmblood. It is bred at the stud of the same name near Lanaken, in the province of Limburg in eastern Flanders, close to the Dutch border. Breeding and selection are directed at performance in show-jumping.

The Novoolexandrian Draught is a Ukrainian breed of draught horse. It is named for the state stud farm of Novo-Oleksandrivka in Bilovodsk Raion of Luhansk Oblast in the easternmost part of Ukraine, where it was bred. It shares its early history with the Russian Heavy Draught bred in Imperial Russia in the second half of the nineteenth century, and until after the Russian Revolution known as the Russian Ardennes; later development took place in Ukraine, where it received official recognition in 1999. It was bred for draught work, but it is also reared for meat and particularly for mare's milk, of which it is a high-yielding producer.

The Strelets Arab or Strelets Horse is an extinct Ukrainian breed of light cavalry horse. It was bred in the nineteenth century at the Striletsky State Stud in Luhansk Oblast of Ukraine, from Arab and a variety of other stock. As with other Russian horse populations, it was gravely reduced by the events of the Russian Revolution and the Russian Civil War, and came close to disappearing. Two stallions and a few mares survived, which was judged to be too small a number to allow the breed to be recovered. Instead, they were taken to the Tersk Stud in the North Caucasus and used as the foundation stock in the development of the new Tersk breed of riding horse. The Strelets also contributed to the development of the Don and Kustanai breeds.