Ukrayinska Pravda (Ukrainian : Українська правда, literally Ukrainian Truth) is a Ukrainian online newspaper founded by Georgiy Gongadze on 16 April 2000 (the day of the Ukrainian constitutional referendum). [2] Published mainly in Ukrainian with selected articles published in or translated to Russian and English, the newspaper is tailored for a general readership with emphasis on the hot issues of the politics of Ukraine. The Ukrainian government has at times reportedly exerted pressure on the publication to restrict access to information. [3]

In May 2021 owner Olena Prytula sold 100% of the corporate rights of Ukrayinska Pravda to Dragon Capital. [1] The parties agreed that the editorial policy of the publication would remain unchanged. [1]

Along with Hromadske TV and Center UA (Center for United Action), Ukrayinska Pravda is part of the Kyiv MediaHub.

In December 2002, Ukrayinska Pravda was refused a press accreditation by the (then) General Prosecutor of Ukraine Svyatoslav Piskun (an offence against the Criminal Code of Ukraine). [4]

Staff and contributors of the Ukrayinska Pravda have pioneered many legal and research techniques aimed at advancing freedom of information in Ukraine, particularly those concerning the public spending, public procurement and offshore tax evasion. Staff journalists routinely participate in non-partisan public actions promoting democracy and press freedom in the country.

Editorial copyright disclaimers [5] collectively describe these sites as the "Ukrayinska Pravda Internet Holding", not specifying the legal nature of the holding.

Among regular bloggers at Ukrayinska Pravda are Anatoliy Hrytsenko, Ruslana Lyzhychko, Inna Bohoslovska, Tetyana Chornovol, Yuriy Lutsenko and many others. 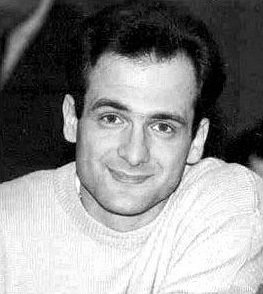 Georgiy Ruslanovich Gongadze was a Ukrainian journalist and film director who was kidnapped and murdered in 2000 near Kyiv. He founded the internet newspaper Ukrayinska Pravda along with Olena Prytula in 2000.

Volodymyr Mykhailovych Lytvyn is a Ukrainian politician best known for being Chairman of the Verkhovna Rada, the Ukrainian parliament. Having previously served in that position from 2002 until 2006, he was re-elected in December 2008 after his party agreed to join the former coalition of Yulia Tymoshenko in an expanded capacity and stayed Chairman till December 2012. From 1994 to 1999, Lytvyn was the aide to President Leonid Kuchma and, later, the head of his office.

(Major) Mykola Melnychenko was a bodyguard of Leonid Kuchma, an officer of the State Security Administration.

The Cassette Scandal, also known as Tapegate or Kuchmagate occurred in 2000 whereby Ukrainian President Leonid Kuchma was caught on tape ordering the kidnap of a journalist. This was one of the main political events in Ukraine's post-independence history. It has dramatically affected the country's domestic and foreign policy, changing Ukraine's orientation at the time from Russia to the West and damaging Kuchma's career. 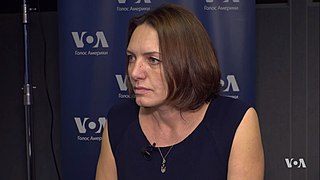 Myroslava Gongadze is a Ukrainian journalist and political activist currently living in the United States. Her husband, journalist Georgiy Gongadze, was abducted and murdered in 2000. Since then she has been a prominent advocate for freedom of the press and protection of the safety of reporters in Ukraine, and has continued to work for justice in the case of her husband's murder. 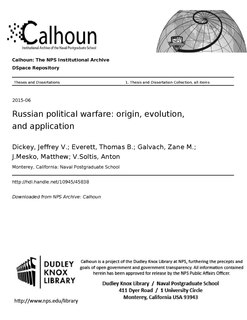 Olena Yuriivna Prytula is a Ukrainian journalist, the former editor-in-chief, owner of the Ukrayinska Pravda, an influential online newspaper that focuses on news and political coverage in Ukraine.

Andriy Ivanovych Sadovyi is a Ukrainian politician. He is the mayor of Lviv, the administrative center of the Lviv Oblast of western Ukraine, former leader of the Self Reliance political party, and co-founder of "Lux" media holding. Sadovyi was a candidate in the 2019 Ukrainian presidential election from 8 January until 1 March 2019, when he decided to withdraw. 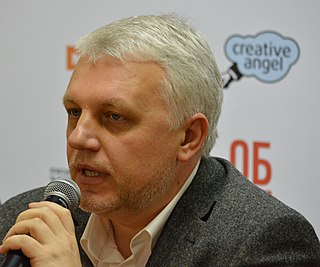 Pavel Grigorievich Sheremet was a Belarusian-born Russian and Ukrainian journalist who was imprisoned by the government of Belarus in 1997, sparking an international incident between Belarus and Russia. The New York Times has described him as "known for his crusading reports about political abuses in Belarus" and "a thorn in the side of Lukashenko's autocratic government". He was awarded the Committee to Protect Journalists' International Press Freedom Award in 1999 and the Organization for Security and Co-operation in Europe's Prize for Journalism and Democracy in 2002. 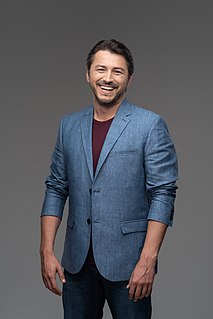 Serhiy Prytula is a Ukrainian TV presenter, actor, author and co-producer of the folk sketch show "Faina Yukraina", host of the morning show "Pidyom" and the talent-show "Ukraine Does not Believe in Tears" on Novyi Kanal. Since 2019, he has been cooperating with the Voice party, running for the Parliament election in 2019 and for the post of Mayor of Kyiv in 2020.

Democratic Alliance is a political party in Ukraine, registered in September 2011, formed on a basis of an anti-corruption platform and Young Christian Democrats of Ukraine NGO.

Tetiana Mykolayivna Chornovol is a Ukrainian journalist and civic activist, and one of the leaders in the Euromaidan protest campaign. She is known for investigative reports about corruption in Ukraine, as well as for her adventurous direct actions. In 2014, she was elected to the Verkhovna Rada. 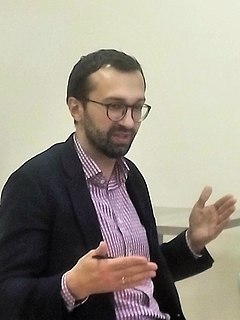 Serhiy Leshchenko is a Ukrainian journalist, politician and public figure, Member of Parliament. A member of the Verkhovna Rada Committee on Corruption Prevention and Counteraction. From 2002 until 2014 Serhiy was working as a Deputy Editor-in-Chief and as a special correspondent for Ukrayinska Pravda online newspaper.

Dmytro Volodymyrovych Gnap is a Ukrainian journalist at Slidstvo.Info and Hromadske.TV. His work focuses on corruption and crime.

Voice is a liberal and pro-European political party in Ukraine, which was led by Ukrainian musician Svyatoslav Vakarchuk until March 2020. With its 20 MPs the party is part of the opposition in the current Ukrainian parliament. 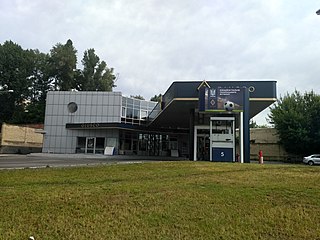 Glusco is a subsidiary of the Swiss Glusco Energy S.A. that operates a national chain of gasoline stations and convenience stores in Ukraine. The Glusco Energy S.A. itself is part of the bigger Proton Energy Group S.A. directed by a less public Israeli businessman Nisan Moiseyev.

Serhiy Sternenko is a Ukrainian imprisoned civil activist and lawyer, head of the NGO "Nebayduzhi", former board member and head of the Odesa regional branch of the "Right Sector", an active participant in the 2014 Ukrainian revolution, one of the founders of the "People's Lustration", YouTuber.

PEN Ukraine is a Ukrainian non-governmental organization established to protect freedom of speech and authors' rights, promote literature and international cultural cooperation. It is part of the network of national centers of the International PEN.

Plan "Shatun" or "Scans of Zakarpattia" is a hypothetical plan to destabilize political situation in Ukraine by Russia. Between November 15, 2016 and March 2017, which, according to the hacker group CyberHunta, was found in the broken Vladislav Surkov mailbox, an aide to Russian President Vladimir Putin. The main goal of the plan is to discredit public authorities and hold early parliamentary and presidential elections.