The Ulaan Tolgoi mine is a large niobium mine located in central Mongolia. Ulaan Tolgoi represents one of the largest niobium reserves in Mongolia having estimated reserves of 200 million tonnes of ore grading 0.06% niobium. [1] 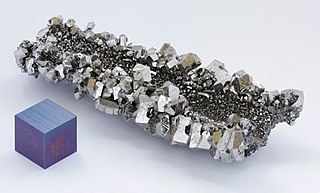 Niobium, formerly known as columbium, is a chemical element with symbol Nb and atomic number 41. It is a soft, grey, crystalline, ductile transition metal, often found in the minerals pyrochlore and columbite, hence the former name "columbium". Its name comes from Greek mythology, specifically Niobe, who was the daughter of Tantalus, the namesake of tantalum. The name reflects the great similarity between the two elements in their physical and chemical properties, making them difficult to distinguish.

Khanbogd is a sum (district) of Ömnögovi Province in southern Mongolia. Khanbogd is the site of the Oyu Tolgoi mine, which is 40 kilometres (25 mi) from the sum centre.

Tsogttsetsii is a sum (district) of Ömnögovi Province in southern Mongolia. The Tavan Tolgoi coal mine is 15 km southwest of the sum center.

Tavan Tolgoi is one of the world’s largest untapped coking and thermal coal deposits, located in the Ömnögovi Province in southern Mongolia. It has a total estimated resource of 6.4 billion tonnes, one quarter of which is high quality coking coal. It is divided into six sections: Tsankhi, Ukhaa Khudag, Bor tolgoi, Borteeg, and Southwest and Eastern coalfields. The Tsankhi section is the largest part, and is divided into East and West Tsankhi - these have had the most focus recently.

The Oyu Tolgoi mine is a combined open pit and underground mining project in Khanbogd sum within the south Gobi Desert, approximately 235 kilometres (146 mi) east of the Ömnögovi Province capital Dalanzadgad. The site was discovered in 2001 and is being developed as a joint venture between Turquoise Hill Resources with 66% ownership and the Government of Mongolia with 34%. The mine began construction as of 2010 and shipped its first batch of copper on 9 July 2013.

Bayan'obo Mining District,, or Baiyun-Obo or Baiyun'ebo, is a mining town in the west of Inner Mongolia, People's Republic of China. It is under the administration of Baotou City, the downtown of which is more than 120 kilometres (75 mi) to the south.

Turquoise Hill Resources is a Canadian mineral exploration and development company headquartered in Vancouver, British Columbia. Its focus is on the Pacific Rim where it is in the process of developing several large mines, the principal one being the Oyu Tolgoi Project in Southern Mongolia 200 km east of Dalanzadgad. The company was called Ivanhoe Mines until August 2, 2012 when an important financing agreement was made with Rio Tinto.

Hugo T. Dummett (1940–2002) was a South African mineral-exploration geologist who is best known for his role in the discovery of the Ekati Diamond Mine in the Barren Lands of Canada's Northwest Territories. Dummett has been described as "the brains, the ideas and the energy" behind the discovery of Ekati, which led to the creation of a new Canadian diamond-mining industry.

Khanbumbat Airport is an airport in Khanbogd, Ömnögovi, Mongolia. The airport's construction was funded by the adjacent Oyu Tolgoi mine. It is the second airport in passenger traffic in Mongolia after Chinggis Khaan International Airport. The airport serves nearly 100,000 passengers annually.

Tavan Tolgoi Airport is an airport serving the Tavan Tolgoi mine in Tsogttsetsii, Ömnögovi, Mongolia. It was built in 2009 by Energy Resources LLC.

Mining is important to the national economy of Mongolia. Coal, copper, and gold are the principal reserves mined in Mongolia. Several gold mines are located about 110 kilometres (68 mi) north of Ulaanbaatar, such as Boroo Gold Mine and Gatsuurt Gold Mine. Khotgor Coal Mine is an open-pit coal mining site about 120 kilometres (75 mi) west of Ulaangom. Ömnögovi Province in the south of Mongolia is home to large scale mining projects such as the Tavan Tolgoi coal mine and the Oyu Tolgoi copper mine. Oyu Tolgoi mine is reported to have the potential to boost the national economy by a third but is subject to dispute over how the profits should be shared. The International Monetary Fund (IMF) has estimated that 71 percent of the income from the mine would go to Mongolia.

The Windfall tax or windfall profits tax in Mongolia was a taxation on the profits made by mining companies operating in Mongolia. It was implemented in 2006 and was the highest windfall profits tax in the world. It was a tax on unsmelted copper and gold concentrate that was produced in Mongolia. The tax was repealed in 2009 and phased out over two years. Repealing the 68% tax law was considered essential to enable foreign mining companies to invest in mineral resources development of Mongolia.

Copper mining in Mongolia is a major industry and source of income for the country. There are only two companies that produce copper concentrate, Erdenet Mining Corporation, a Mongolian-Russian joint venture, and the Oyu Tolgoi mine, a joint venture between Rio Tinto Group, Turquoise Hill Resources, and the Government of Mongolia. Until 2010 copper was Mongolia's largest export.

The Ulaan Ovoo Coal Mine Mongolian: Улаан Овоо, red mound) is a coal mine located in the Tüshig sum of Selenge aimag in northern Mongolia. It is located on the northern shore of the Zelter River a short distance west of the sum center.

The Övdög Khudag Coal Mine is a coal mine being developed in the Bayanjargalan sum of the Dundgovi in southern central Mongolia. The deposit has coal reserves amounting to projected 89 million tonnes of Lignite. Together with the "Ikh ulaan uul" deposit nearby it comprises the "Black Hills" development.

The Ulaan-Uul mine is an underground mine located in the Nogoonnuur sum of Khovd aimag in western Mongolia.

The Bayan Obo mine is a large niobium mine located in northern China in Inner Mongolia. Bayan Obo represents one of the largest niobium reserves in China having estimated reserves of 40.1 million tonnes of ore grading 0.14% niobium.

Byambasaikhan Bayanjargal is a Mongolian business executive specialized in energy, infrastructure and mining investment and financing. He played leading roles in closing several of Asia's landmark project finance transactions. He is known as the clean energy pioneer in Mongolia having successfully developed and commissioned the country's first utility scale wind power project. Byambasaikhan's interests are in areas of energy, clean energy and regional infrastructure connectivity.