Ulama (Spanish pronunciation:  [uˈlama] ) is a ball game played in Mexico, currently experiencing a revival from its home in a few communities in the state of Sinaloa. As a descendant of the Aztec version of the Mesoamerican ballgame, [1] the game is regarded as one of the oldest continuously played sports in the world and as the oldest known game using a rubber ball.

The word ulama comes from the Nahuatl word ōllamaliztli [oːlːamaˈlistɬi] a combination of ōllamas [ˈoːlːama] (playing of a game with a ball) and ōllei [ˈoːlːi] (rubber). Ōllamaliztli was the Aztec name for the Mesoamerican ballgame, whose roots extended back to at least the 2nd millennium BC and evidence of which has been found in nearly all Mesoamerican cultures in an area extending from modern-day Mexico to El Salvador, and possibly in modern-day Arizona and New Mexico. [2] Archaeologists have uncovered rubber balls dating to at least 1600 BC, [3] ballgamer figures from at least 1200 BC, and nearly 1500 ancient ball courts. [2] [4]

Due to its religious and ritual aspects, Spanish Catholics suppressed the game soon after the Spanish conquest. It survived in areas such as Sinaloa, where Spanish influence was less pervasive. [5]

As part of its nationwide revival, the game now has a home in the capital Mexico City, at a cultural centre in the Azcapotzalco neighbourhood. [6]

Ulama games are played on a temporary court called a tastei ( [tas.te] , from tlachtli [ˈt͡ɬat͡ʃt͡ɬi] , the Nahuatl word meaning "ballcourt"). The bounds of these long narrow courts are made by drawing or chalking thick lines in the dirt. The courts are divided into opposing sides by a center line, called an analco. A ball that is allowed to cross the end line, the chichi or chivo, will result in a point scored for the opposing team. Points or rayas ("lines", so named for the tally marks used to keep score) are gained in play. The scoring system provides for resetting the score to zero under certain conditions, which can make for lengthy games.

The object of the game is to keep the ball in play and in-bounds. Depending on the score and the local variant of the rules, the ball is played either high or low. A team scores a point when a player of the opposing team hits the ball out of turn, misses the ball, knocks the ball out of bounds, touches the ball with any part of the body aside from the hip, accidentally touches a teammate, lets the ball stop moving before it reaches the center line, or even if they fail to announce the score after they have scored a point.

The first team that scores eight points wins. If both teams end up having the same number of points after a turn, both sides begin again from zero. One record-setting game reportedly lasted for eight days.[ citation needed ] Most modern games are stopped after about two hours.

Anahuac, 2.5 kilometres (1.5 mi) above sea level between 19° and 20° north latitude and 98°45’ to 99°20’ west longitude, is the ancient core of Mexico. Anahuac is a Nahuatl name which means "close to water." It can be broken down like this: A(tl) + nahuac. Atl means "water" and nahuac, which is a relational word that can be affixed to a noun, means "close to." Anahuac is sometimes used interchangeably with "Valley of Mexico", but Anahuac properly designates the south-central part of the 8,000 km2 (3,089 sq mi) valley, where well-developed prehispanic culture traits had created distinctive landscapes now hidden by the urban sprawl of Mexico City. In the sense of modern geomorphological terminology, "Valley of Mexico" is misnamed. It is a closed basin of internal drainage, not a valley, in the technical sense. 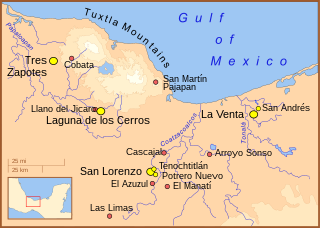 The Olmecs were the earliest known major Mesoamerican civilization. Following a progressive development in Soconusco, they occupied the tropical lowlands of the modern-day Mexican states of Veracruz and Tabasco. It has been speculated that the Olmecs derived in part from the neighboring Mokaya or Mixe–Zoque cultures.

The Mesoamerican ballgame was a sport with ritual associations played since at least 1650 BC by the pre-Columbian people of Ancient Mesoamerica. The sport had different versions in different places during the millennia, and a newer, more modern version of the game, ulama, is still played by the indigenous populations in some places. 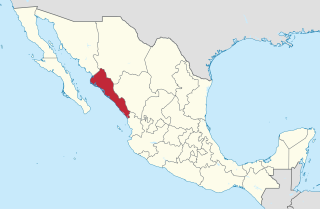 Sinaloa, officially the Estado Libre y Soberano de Sinaloa, is one of the 31 states which, along with Mexico City, comprise the Federal Entities of Mexico. It is divided into 18 municipalities and its capital city is Culiacán Rosales. 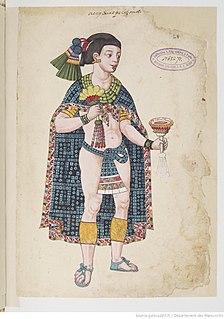 Batéy was the name given to a special plaza around which the Caribbean Taino built their settlements. It was usually a rectangular area surrounded by stones with carved symbols (petroglyphs). 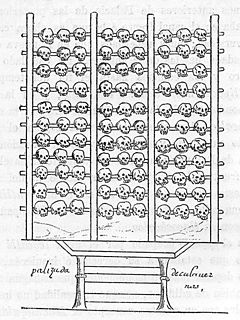 A tzompantli or skull rack is a type of wooden rack or palisade documented in several Mesoamerican civilizations, which was used for the public display of human skulls, typically those of war captives or other sacrificial victims. It is a scaffold-like construction of poles on which heads and skulls were placed after holes had been made in them. Many have been documented throughout Mesoamerica, and range from the Epiclassic through early Post-Classic. In 2017 archeologists announced the discovery of the Hueyi Tzompantli, with more than 650 skulls, in the archeological zone of the Templo Mayor in Mexico City. 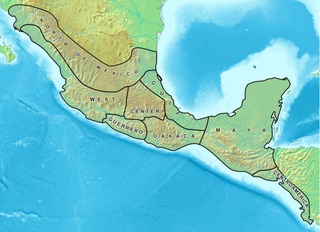 Mesoamerica is a historical region and cultural area in southern North America and most of Central America. It extends from approximately central Mexico through Belize, Guatemala, El Salvador, Honduras, Nicaragua, and northern Costa Rica. Within this region pre-Columbian societies flourished for more than 3,000 years before the Spanish colonization of the Americas. Mesoamerica was the site of two of the most profound historical transformations in world history: primary urban generation, and the formation of New World cultures out of the long encounters among indigenous, European, African and Asian cultures.

A Mesoamerican ballcourt is a large masonry structure of a type used in Mesoamerica for over 2,700 years to play the Mesoamerican ballgame, particularly the hip-ball version of the ballgame. More than 1,300 ballcourts have been identified, 60% in the last 20 years alone. Although there is a tremendous variation in size, in general all ballcourts are the same shape: a long narrow alley flanked by two walls with horizontal, vertical, and sloping faces. Although the alleys in early ballcourts were open-ended, later ballcourts had enclosed end-zones, giving the structure an -shape when viewed from above.

El Manatí is an archaeological site located approximately 60 km south of Coatzacoalcos, in the municipality of Hidalgotitlán 27 kilometers southeast of Minatitlán in the Mexican state of Veracruz. El Manatí was the site of a sacred Olmec sacrificial bog from roughly 1600 BCE until 1200 BCE.

Castilla elastica, the Panama rubber tree, is a tree native to the tropical areas of Mexico, Central America, and northern South America. It was the principal source of latex among the Mesoamerican peoples in pre-Columbian times. The latex gathered from Castilla elastica was converted into usable rubber by mixing the latex with the juice of the morning glory species Ipomoea alba which, conveniently, is typically found in the wild as a vine climbing Castilla elastica. The rubber produced by this method found several uses, including most notably, the manufacture of balls for the Mesoamerican ballgame ōllamaliztli. 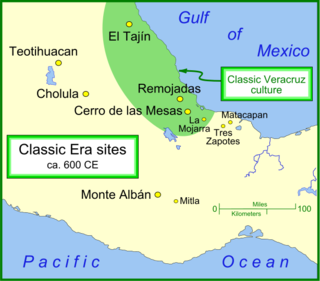 Classic Veracruz culture refers to a cultural area in the north and central areas of the present-day Mexican state of Veracruz, a culture that existed from roughly 100 to 1000 CE, or during the Classic era. 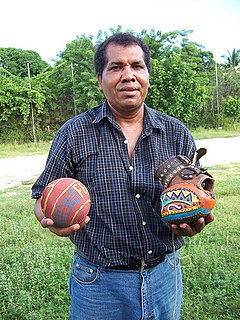 Ancient Mesoamericans were the first people to invent rubber balls, sometime before 1600 BCE, and used them in a variety of roles. The Mesoamerican ballgame, for example, employed various sizes of solid rubber balls and balls were burned as offerings in temples, buried in votive deposits, and laid in sacred bogs and cenotes.

Dainzú is a Zapotec archaeological site located in the eastern side of the Valles Centrales de Oaxaca, about 20 km south-east of the city of Oaxaca, Oaxaca State, Mexico. It is an ancient village near to and contemporary with Monte Albán and Mitla, with an earlier development. Dainzú was first occupied 700-600 BC but the main phase of occupation dates from about 200 BC to 350 AD. The site was excavated in 1965 by Mexican archaeologist Ignacio Bernal.

El Teúl is an important archaeological Mesoamerican site located on a hill with the same name in the Teúl Municipality in the south of the Zacatecas State, Mexico, near the Jalisco State.

Maya Ballgame, which is a branch of the Mesoamerican Ballgame, is a sporting event that was played throughout the Mesoamerican era by the Maya civilization. The Maya civilization was spread out throughout much of Central America. One of the common links of the Mayan culture of Mexico, Guatemala, Honduras, and Belize is the game played with a rubber ball, about which we have learned from several sources. Maya ballgame was played with big stone courts. The ball court itself was a focal point of Maya cities and symbolized the city's wealth and power. 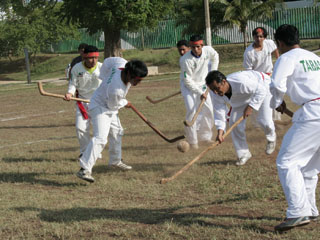 Pelota purépecha, called Uárukua Ch'anakua in the Purépecha language, is an Indigenous Mexican sport similar to those in the hockey family. A common variant, distinguished as pasárutakua in Purépecha, uses a ball which has been set on fire and can be played at night. It has a league, several practicing communities and about 800 players across Mexico as of 2010. It is one of 150 pre-Hispanic Mexican games at risk of dying out along with Ulama.