Ularice (Cyrillic: Уларице) is a village in the municipality of Usora, Bosnia and Herzegovina. [1]

The Cyrillic script is a writing system used for various alphabets across Eurasia, particularly in Eastern Europe, the Caucasus, Central Asia, and North Asia. It is based on the Early Cyrillic alphabet developed during the 9th century AD at the Preslav Literary School in the First Bulgarian Empire. It is the basis of alphabets used in various languages, especially those of Orthodox Slavic origin, and non-Slavic languages influenced by Russian. As of 2011, around 250 million people in Eurasia use it as the official alphabet for their national languages, with Russia accounting for about half of them. With the accession of Bulgaria to the European Union on 1 January 2007, Cyrillic became the third official script of the European Union, following Latin and Greek.

Snagov is a commune, located 40 km north of Bucharest in Ilfov County, Romania. According to the 2002 census, 99.2% of the population is ethnic Romanian. The commune is composed of five villages: Ciofliceni, Ghermănești, Snagov, Tâncăbești and Vlădiceasca. Snagov is a tourist and spa resort - but the necessary infrastructure has regressed after 1989.

Elektrėnai Municipality is one of sixty municipalities in Lithuania.

Knorydy Górne is a village in the administrative district of Gmina Bielsk Podlaski, within Bielsk County, Podlaskie Voivodeship, in north-eastern Poland. It lies approximately 10 kilometres (6 mi) south-west of Bielsk Podlaski and 46 km (29 mi) south of the regional capital Białystok.

Tubikənd is The village forms part of the municipality of Qoşakənd.

Linyou County is a county of Baoji, in the west of Shaanxi province, China, bordering Gansu province to the north and northwest.

Dzierżążnik is a village in the administrative district of Gmina Trzcinica, within Kępno County, Greater Poland Voivodeship, in west-central Poland.

Budziska is a settlement in the administrative district of Gmina Czersk, within Chojnice County, Pomeranian Voivodeship, in northern Poland. It lies approximately 5 kilometres (3 mi) north-east of Czersk, 34 km (21 mi) north-east of Chojnice, and 73 km (45 mi) south-west of the regional capital Gdańsk.

Mitrovac is a settlement in the region of Baranja, Croatia. Administratively, it is located in the Čeminac municipality within the Osijek-Baranja County. Population is 64 people.

Łysa Góra is a settlement in the administrative district of Gmina Szczecinek, within Szczecinek County, West Pomeranian Voivodeship, in north-western Poland.

Arupäälse is a village in Lüganuse Parish, Ida-Viru County in northeastern Estonia. 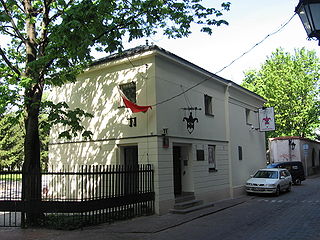 Museum of Caricature is a museum in Warsaw, Poland. The museum was established in 1978. It has a collection of over 20,000 pieces by Polish and foreign artists.

Ajdinovići is a village in the municipality of Višegrad, Bosnia and Herzegovina.

Rudine is a village in the municipality of Sokolac, Bosnia and Herzegovina.

Šahbegovići is a village in the municipality of Sokolac, Bosnia and Herzegovina.

Brestovo is a village in the municipality of Vladičin Han, Serbia. According to the 2002 census, the village has a population of 115 people.

Jagnjilo is a village in the municipality of Vladičin Han, Serbia. According to the 2002 census, the village has a population of 106 people.