Ulf Ragnar Ling-Vannerus (born 26 May 1929) is a Swedish officer and fencer. He competed in the team épée event at the 1960 Summer Olympics. [1]

Eric Randolph Barnes is an American former shot putter who holds both the current outdoor and indoor world records for the event. He won silver at the 1988 Olympics and gold at the 1996 Olympics. As of 2020, both of Barnes's records still stand. Only three throwers have been within 40 centimetres (16 in) of his outdoor world record since it was set. Barnes was banned for 27 months in 1990 for anabolic steroid usage, before he received a lifetime ban in 1998 after testing positive for androstenedione. 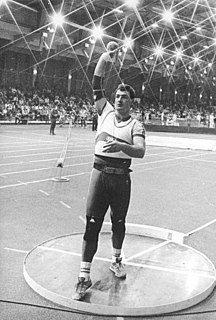 Ulf Béla Timmermann is a German shot putter who broke many world records during the 1980s and is the first and one of only two people to ever throw over 23 metres. 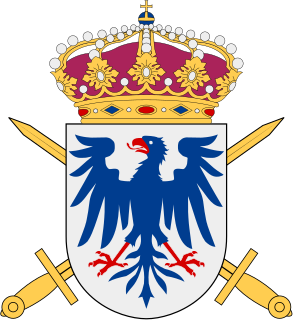 The Värmland Regiment, designations I 22, I 2 and I 2/Fo 52, was a Swedish Army infantry regiment that traces its origins back to the 16th century. The regiment's soldiers were originally recruited from the province of Värmland, where the unit was later garrisoned. The unit was disbanded as a result of the disarmament policies set forward in the Defence Act of 2000. 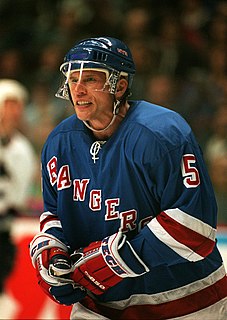 Ulf Bo Samuelsson is a Swedish-American former professional ice hockey defenceman who currently serves as head coach of Leksands IF of the Swedish Hockey League (SHL). He played several seasons in the National Hockey League (NHL) with the Hartford Whalers, Pittsburgh Penguins, New York Rangers, Detroit Red Wings, and Philadelphia Flyers. He was a two-time Stanley Cup champion as a member of the Penguins in 1991 and 1992. He is currently a US-based scout for the NHL Seattle Kraken, which will begin play in 2021.

Ulf Sundelin is a retired Swedish sailor. Together with his younger brothers Peter and Jörgen he won a gold medal in the 5.5 metre class at the 1968 Olympics and a silver medal at the 1969 World Championships. The brothers also won the 1971 world title in the three-person keelboat and placed sixth at the 1972 Olympics.

Ulf Nilsson may refer to:

Ulf Johan Norrman was a Swedish Olympic sailor in the Star class. He competed in the 1968 Summer Olympics together with John Albrechtson, where they finished 9th. He was born in Gothenburg, Sweden.

Events from the year 1952 in Sweden

Ken Nlata Sema is a Swedish professional footballer who plays for Championship club Watford as a midfielder. 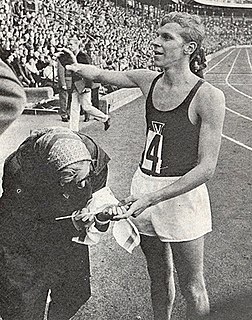 Ulf Åkerblom is a Swedish bobsledder. He competed in the four man event at the 1984 Winter Olympics.

Ulf Berendt was a Swedish figure skater. He competed in the pairs event at the 1952 Winter Olympics.