Ulla Mari Ainikki Anttila (born 13 December 1963 in Helsinki) is a Finnish politician and a former member of Finnish Parliament, representing the Green League. She was first elected to the parliament in 1991 and left the parliament 2007. She is also a member of the city council of Vantaa (1985–1996, 2005-).

Anttila was born in Helsinki, Finland. She has a Master's degree in Social psychology from the University of Helsinki. She is married to Tero Taponen. They have two children, Alli (b. 1994) and Taru (b. 1997).

The Centre Party, officially the Centre Party of Finland, is a liberal-conservative and agrarian political party in Finland. Its leader is Annika Saarikko, who was elected in September 2020 to follow Katri Kulmuni, the former finance minister of Finland. As of December 2019, the party has been a coalition partner in the Marin Cabinet, led by Prime Minister Sanna Marin of the Social Democratic Party (SDP).

Irina Kaarina Krohn is a Finnish politician and a former member of Finnish Parliament, representing the Green League. She is also member of the city council of Helsinki and has held positions in various other organisations. She was first elected to the parliament in 1995. She was a substitute member of the Parliamentary Assembly of the Council of Europe and a member of the Sub-Committees on Sustainable Development and Population.

Anni Milja Maaria Sinnemäki is a Finnish politician and a member of the Finnish Parliament between 1999 and 2015, representing the Green League.

Uusimaa is a Finnish constituency represented in eduskunta. It covers the administrative region of Uusimaa, excluding the capital city of Helsinki, which forms its own constituency. Uusimaa elects 36 members to eduskunta, which makes it the largest electoral district in the country.

The Iraq leak is a series of events that began on 6 March 2003 from a statement given by Anneli Jäätteenmäki, leader of the Finnish Centre Party, in a televised election debate prior to the 2003 parliamentary election. Jäätteenmäki accused Paavo Lipponen, the then Prime Minister of Finland, of attaching Finland to George W. Bush's 'coalition of the willing' that was in preparation for the 2003 war in Iraq. Lipponen had visited Washington on 9 December 2002. 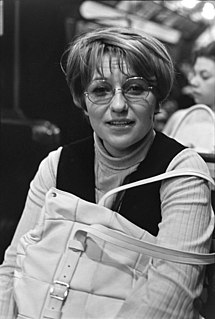 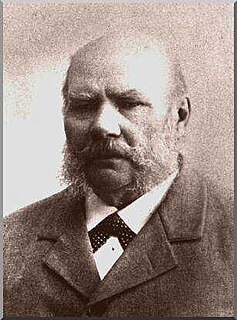 August Wilhelm Holmström was a Finnish silver- and goldsmith. Born in Helsinki, Finland, he became an apprentice at the workshop of jeweller Karl Herold in St. Petersburg 1845—1850, master in 1857 with his own workshop.

Alma Theresia Pihl-Klee was one of the two female designers at Fabergé and one of the best known female Fabergé workmasters.

Eva-Riitta Siitonen is a Finnish politician. She represents the National Coalition Party.

Hanna Kosonen is a Finnish politician and former ski-orienteering competitor. She was Finland's Minister of Science and Culture from August 2019 till August 2020.

Sirkka-Liisa Anttila is a Finnish politician and was the Minister of Agriculture and Forestry in Matti Vanhanen's second cabinet and Mari Kiviniemi's cabinet. She represents the Centre Party. 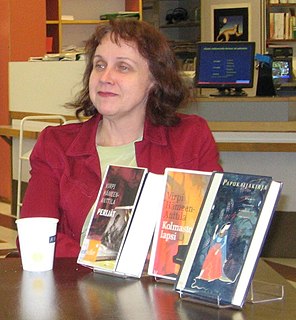 Virpi Hämeen-Anttila is a Finnish writer, translator, and researcher. She was the recipient of the Eino Leino Prize in 2002 along with her husband Jaakko Hämeen-Anttila, for their work in translating and promoting multicultural literature. In addition to being a best-selling novelist, she is a translator and non-fiction writer. She also teaches Sanskrit and the history of Indian art at Helsinki University.

Erin Helena Maureen Anttila, better known as simply Erin, is a Finnish singer who rose to fame with the pop group Nylon Beat.

Pertti Edvard Salolainen CBE is a Finnish politician. He has served as MP from the National Coalition Party and party chairman (1991–1994) and Minister (1987–1995).

Ulla Kaija Puolanne was a Finnish politician who served as Deputy Minister of Finance from 1987 to 1991. Born in Lahti, she graduated from the Helsinki School of Economics in 1954 and afterwards worked in finance in an engineering office. Puolanne first got involved in politics in 1969 when she was elected to Lahti City Council. Six years later she was elected to the Parliament of Finland in the 1975 elections as a member of the National Coalition Party. She served as a member of Parliament until 1991, and was primarily part of the Banking and Finance Committees.

Anttila is a Finnish surname. Notable people with the surname include:

Ulla Vuorela was a Finnish professor of social anthropology.

Raimo Aulis Anttila is a Finnish linguist who is Professor Emeritus of Indo-European Linguistics at the University of California, Los Angeles. 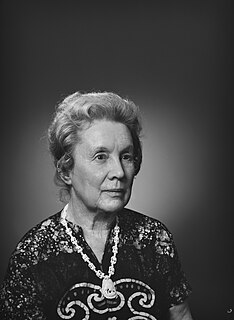 Eva Anttila was a Finnish painter and textile artist. Her work was notable for applying techniques of painting to her textile works and creating pictorial scenes.