Last updated June 22, 2022
South Korean island
This article is about the island. For the county of the same name, see Ulleung County.

The island makes up the main part of Ulleung County, North Gyeongsang Province, South Korea and is a popular tourist destination. The main city of Ulleung-do is the port of Dodong (도동;道洞), which serves as the main ferry port between Ulleung-do and the South Korean mainland. After tourism, the main economic activity is fishing, including its well-known harvest of squid, which can be seen drying in the sun in many places.

The island consists primarily of trachyandesite rock. A major explosive eruption about 9,350 years ago reached a Volcanic Explosivity Index of 6 and deposited tephra as far as central Honshū over 800 km (500 mi) away, while producing pyroclastic flows on the island and decapitating its top to form a caldera.

Archaeological evidence indicates that the island has been inhabited since the 1st millennium BC. The first confirmed historical reference to Ulleung-do is in the Samguk Sagi for the year 512. In that year, the Silla general Kim Isabu conquered the island, which had previously been the autonomous nation of Usan-guk. Some accounts relate that he used a number of wooden lions to intimidate the population, threatening to turn them loose unless they surrendered.

Usan-guk did not remain under the Silla rule, however, and the island did not become a permanent political part of Korea until 930, when it was annexed by Goryeo. Remote as it is from the Korean mainland, Ulleung-do was a recurrent security headache for the Goryeo and Joseon dynasties. It was devastated by Jurchen pirate raids in the 11th century, and by Wokou pirate raids in the 14th century. A clash with Japan over fishing rights in the 1690s was precipitated by the Korean fisherman An Yong-bok. In response to these difficulties, Joseon adopted an "empty-island" policy which however proved impossible to enforce. The empty-island policy was officially rescinded in 1881, after which the government sought to encourage additional settlement of Ulleungdo.

American whaleships cruised for right whales off the island between 1848 and 1892. [5] Some went ashore nearby Jukdo to club pinnipeds. [6]

Ulleungdo is a volcanic island that rose from the seabed between the third and fourth Cenozoic periods, and the part of the island is near the peak of the mountain. It is the summit of the longitudinal volcano, which was created by volcanic activity during the 3rd and 4th Cenozoic Era, and consists of trachyte, andesite, and basalt. Hot spot volcanic activity by the General Yi Sa-bu seamount, dissolved Simheungtaek seamount and Dokdo and Ulleung Island with An Yong-bok seamount was created as well. Dokdo is 4.6 million years ago estimated 2.5 million years ago, and the creation of Ulleungdo to us, 2.5 million years ago in 5,000 years ago.

There is Seonginbong Peak in the center of the island. In the northern part of the island is the only flat basin, the Nari Basin. The Nari Basin was formed from caldera in the crater of the volcano, which was shaped like a Cheonji or Baekrokdam, but the water was drained and the soil was covered with stones and dirt on the bottom of the lake. There are 650 species of plants, including beech, cedar, and pine trees, and 50 species of birds, including black pigeons, and 340 species of insects.

Favorite activities for tourists are hiking, fishing, and eating hoe (a Korean raw fish dish). Sightseeing boats make regular three-hour circuits about Ulleung-do, departing from the harbor at Dodong and passing by all the points of interest along the coast, including many interesting rock formations and the small neighboring island of Jukdo. Other scenic sites are Seonginbong, the highest peak on the island (984 m (3,228 ft)); Bongnae waterfall; the "natural icehouse"; and a coastal cliff from which the Liancourt Rocks can be discerned in the distance. [7] [8]

Ulleung-do has a humid subtropical climate (Köppen climate classification Cfa), though it resembles the west coast of Japan much more than Korea, since in winter rainfall is heavy if less so than in such wet cities as Kanazawa or Akita. Sunshine is also very low in the winter if again not so markedly as in the previously-mentioned Japanese cities.

The island and surrounding water were registered as a marine protected area to secure rich biodiversity in 2014. [13]

As above mentioned, North Pacific right whales and pinnipeds were targeted by whalers and sealers in the adjacent waters. Fin whales were also commonly observed historically, and other cetaceans such as minke whales and dolphins may appear around the island. [14] [15] [16] [17] 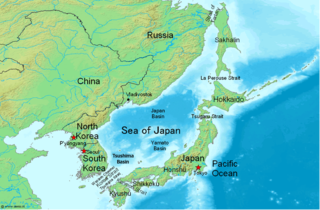 The Sea of Japan(see below for other names) is the marginal sea between the Japanese archipelago, Sakhalin, the Korean Peninsula, and the mainland of the Russian Far East. The Japanese archipelago separates the sea from the Pacific Ocean. Like the Mediterranean Sea, it has almost no tides due to its nearly complete enclosure from the Pacific Ocean. This isolation also affects faunal diversity and salinity, both of which are lower than in the open ocean. The sea has no large islands, bays or capes. Its water balance is mostly determined by the inflow and outflow through the straits connecting it to the neighboring seas and the Pacific Ocean. Few rivers discharge into the sea and their total contribution to the water exchange is within 1%.

A seamount is a large geologic landform that rises from the ocean floor that does not reach to the water's surface, and thus is not an island, islet or cliff-rock. Seamounts are typically formed from extinct volcanoes that rise abruptly and are usually found rising from the seafloor to 1,000–4,000 m (3,300–13,100 ft) in height. They are defined by oceanographers as independent features that rise to at least 1,000 m (3,281 ft) above the seafloor, characteristically of conical form. The peaks are often found hundreds to thousands of meters below the surface, and are therefore considered to be within the deep sea. During their evolution over geologic time, the largest seamounts may reach the sea surface where wave action erodes the summit to form a flat surface. After they have subsided and sunk below the sea surface such flat-top seamounts are called "guyots" or "tablemounts". 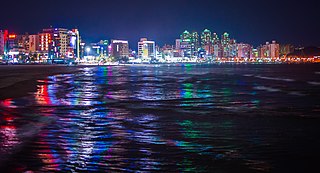 Pohang is a city in the province of North Gyeongsang, South Korea, and a main seaport in the Daegu-Gyeongbuk region. The built-up area of Pohang is located on the alluvium of the mouth of the Hyeongsan River. The city is divided into two wards (gu), Buk-gu or Northern Ward and Nam-gu or Southern Ward. 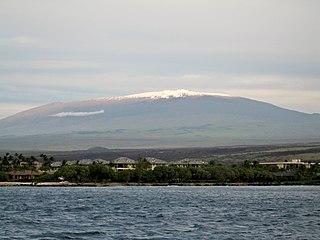 The Hawaiian–Emperor seamount chain is a mostly undersea mountain range in the Pacific Ocean that reaches above sea level in Hawaii. It is composed of the Hawaiian ridge, consisting of the islands of the Hawaiian chain northwest to Kure Atoll, and the Emperor Seamounts: together they form a vast underwater mountain region of islands and intervening seamounts, atolls, shallows, banks and reefs along a line trending southeast to northwest beneath the northern Pacific Ocean. The seamount chain, containing over 80 identified undersea volcanoes, stretches about 6,200 km (3,900 mi) from the Aleutian Trench in the far northwest Pacific to the Lōʻihi Seamount, the youngest volcano in the chain, which lies about 35 kilometres (22 mi) southeast of the Island of Hawaiʻi.

Seogwipo is the second-largest city on Jeju Island, settled on a rocky volcanic coastline in the southern part of Jeju Province, South Korea. In July 2006, Seogwipo's boundaries were expanded to include the entire southern half of Jeju island. A UNESCO World Heritage site and 2002 FIFA World Cup host, it had a population of 155,691 as of December 31, 2011.

Usan-guk, or the State of Usan, occupied Ulleung-do and the adjacent islands during the Korean Three Kingdoms period. According to the Samguk Sagi, it was conquered by the Silla general Kim Isabu in 512. He is said to have used wooden lions or tigers to intimidate the residents into surrendering. It has been written that the alias of Usan-guk is Ulleung-do. Usan-guk rarely entered into historical records, but appears to have continued a largely autonomous existence until its loss of independence to Goryeo in 930. 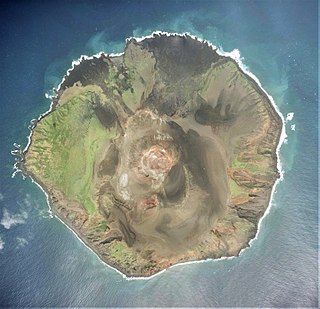 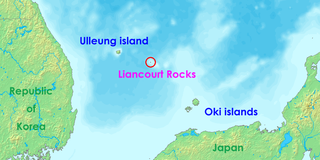 The Liancourt Rocks form a group of small islets in the Sea of Japan between the Korean peninsula and the Japanese archipelago. The Liancourt Rocks comprise two main islets and 35 smaller rocks; the total surface area of the islets is 0.187554 square kilometres and the highest elevation of 168.5 metres (553 ft) is on the West Islet. The Liancourt Rocks lie in rich fishing grounds that may contain large deposits of natural gas. The English name Liancourt Rocks is derived from Le Liancourt, the name of a French whaling ship that came close to being wrecked on the rocks in 1849.

An Yong-bok was a Korean fisherman in 17th century of Joseon Dynasty famous for his travels to Japan. His activities were instrumental in determining fishery rights in the waters of Ulleungdo and the Liancourt Rocks, two islands in the Sea of Japan.

The Liancourt Rocks dispute is a territorial dispute between South Korea and Japan. Both countries claim sovereignty over the Liancourt Rocks, a group of small islets in the Sea of Japan which are referred to as "Dokdo" in Korean and "Takeshima" (竹島) in Japanese. North Korea also claims sovereignty of the islands.

Suiyo Seamount is a seamount off the eastern coast of Japan, directly south of Torishima and Sofugan volcano at the southern tip of the Izu Islands. The volcano is one of the Shichiyo Seamounts, a small group of submarine volcanoes named after different days of the week.

Dokdo Museum is the name used for two museums in Korea that relate to the Liancourt Rocks, known as Dokdo in Korean. One of the museums is located on Ulleungdo and the other, which opened later, is in Seoul.

Daehanjiji is an elementary school geography text about the Korean Empire by Hyeun Chae. Hyeun Chae wrote the book in 1899, translating and compiling Japanese and Korean sources. It was published by Gwangmun-sa, Seoul.

Dokdo Volunteer Garrison was a South Korean paramilitary outpost on the islands of Liancourt Rocks, which are called Dokdo in Korean. South Korea and Japan each claim sovereignty over them. South Korea maintained the garrison from 1953 to 1956.